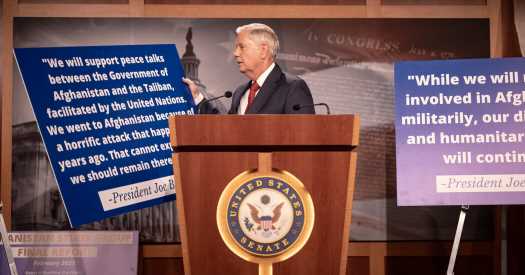 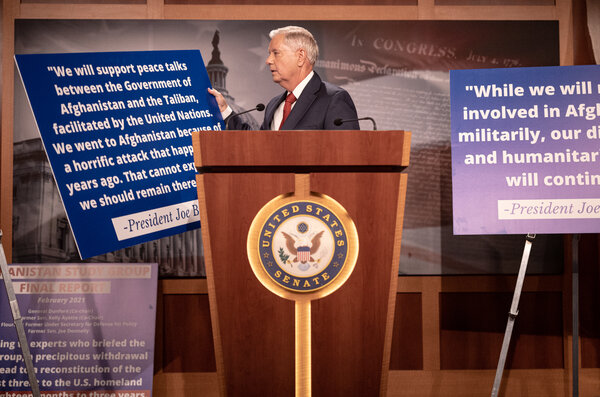 For decades, Senator Lindsey Graham traveled the world with his friend John McCain, visiting war zones and meeting with foreign allies and adversaries, before returning home to promote the Republican gospel of an internationalist, hawkish foreign policy.

But this week, after President Biden announced that troops would leave Afghanistan no later than Sept. 11, Mr. Graham took the podium in the Senate press gallery and hinted that spreading the party’s message had become a bit lonely.

“I miss John McCain a lot but probably no more than today,” Mr. Graham said. “If John were with us, I’d be speaking second.”

Mr. McCain, the onetime prisoner of war in Vietnam, in many ways embodied a distinctive Republican worldview: a commitment to internationalism — and confrontation when necessary — that stemmed from the Cold War and endured through the presidencies of Ronald Reagan and George H.W. Bush before evolving after the Sept. 11 attacks to account for the threat of global terrorism.

Then came Donald J. Trump, who campaigned on a promise to put America first, an isolationist mantra that resonated with a nation weary of endless wars. Now, out of power in Washington, Republicans have splintered into disparate factions, with few figures to take the lead.

In the Senate, lawmakers who built reputations as leaders on foreign policy — like Mr. McCain and Senators Richard Lugar and John Warner — are long gone. Mr. Trump defenestrated much of the party’s policymaking establishment by alienating dozens of foreign policy experts, who refused to support his campaign, let alone enter his administration.

And for ambitious Republican officials, the political calculation remains stark: To the extent that Republican voters care at all about foreign policy issues, many have come to embrace Mr. Trump’s nationalistic views on issues like trade, overseas military ventures and even Russia.

“Boy, I’m hard-pressed,” said Chuck Hagel, the former Republican senator, when asked to name a G.O.P. foreign policy expert in the Senate. “The emphasis on foreign policy probably hasn’t been the same with senators. But I can’t think of a Dick Lugar or a John Warner or any of the guys I served with.”

Mr. Graham, who made an unsuccessful run for president and was always overshadowed by Mr. McCain as a Republican voice on foreign policy, spoke for more than half an hour at a news conference on Wednesday, walking listeners through a history of the Afghan conflict.

“This is what they’re capable of doing when we ignore the threat of the enemy,” he said, gesturing to a large photo of a burning World Trade Tower. “The likelihood of this and this happening again is going through the roof after President Biden’s decision today.”

02/09/2021 Politics Comments Off on How the G.O.P. Lost Its Clear Voice on Foreign Policy
Markets