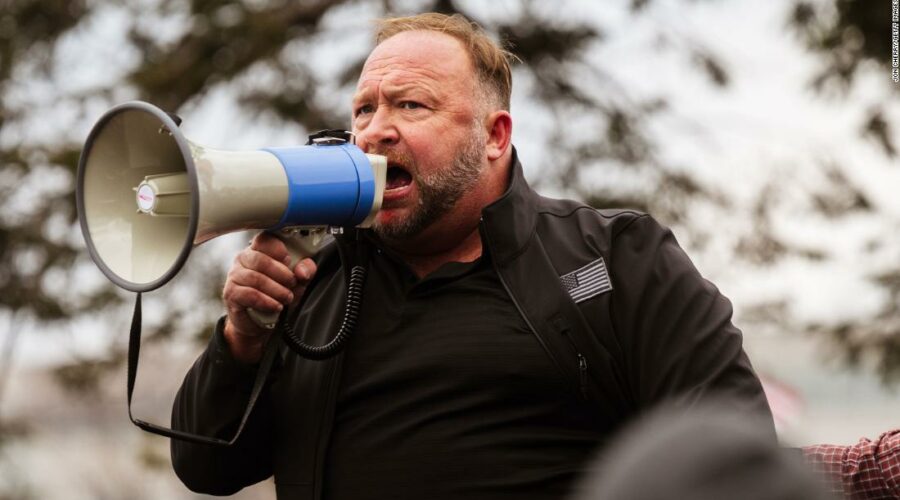 The move, which could pause civil litigation against the companies, comes after Jones was found legally responsible for damages in three defamation lawsuits related to false claims he made about the 2012 Sandy Hook mass shooting.
Jones baselessly said in the aftermath of the shooting, in which 26 people were killed, that the incident was staged. Facing lawsuits, Jones has since acknowledged the shooting occurred. He said in a 2019 sworn deposition that a “form of psychosis” caused him at the time to believe it was staged.

Christopher Mattei, an attorney representing some of the Sandy Hook families in a Connecticut lawsuit, said Monday that Jones will ultimately face the music for his actions, despite his attempt to delay the civil case.

“Alex Jones is just delaying the inevitable: a public trial in which he will be held accountable for his profit-driven campaign of lies against the Sandy Hook families who have brought this lawsuit,” Mattei said in a statement.

The documents filed on Sunday in the US Bankruptcy Court for the Southern District of Texas sought bankruptcy protection for Infowars and Prison Planet, another one of Jones’ right-wing outlets. Jones also sought bankruptcy protection for Infowars Health, the store from which Jones has hawked nutritional supplements and other products. The type of bankruptcy filing the company made is one that could allow it to stay in business. Many companies have used bankruptcy to continue to operate while shedding debt and other liabilities they can’t afford, including legal judgments in some cases.
The Infowars store has been particularly lucrative. In a 2019 deposition, Jones’ father, who operated much of the business, estimated “something like 80 percent” of revenue was “probably” from Infowars store sales. Citing court documents, the Huffington Post reported in 2022 that over a three year period from 2015 to 2018, the Infowars store did $165 million in sales.

In the court documents filed Sunday, boxes had been checked off indicating that the estimated assets for Infowars and Prison Planet are less than $50,000 and their estimated liabilities are between $1 million and $10 million. Boxes checked off in the document for Infowars Health put estimated assets for that company between $500,000 and $1 million and estimated liabilities ranging from $1 million to $10 million.
Jones has been particularly uncooperative as he has been sued. A Texas judge issued default judgments against him for not complying with court orders in October. And in November, a Connecticut judge did the same.

Late last month, Jones was held in contempt by the Connecticut court for failing to comply with multiple orders to sit for a deposition against him. Jones paid $75,000 in fines over the matter, but later had the money returned to him when he finally did comply with the order.
Mark Bangston, an attorney representing the parents of two Sandy Hook children in a Texas lawsuit, told CNN in an email, “None of the Mr. Jones’ ridiculous tricks have worked in the past, and this one will fare no better.”
Source: Read Full Article