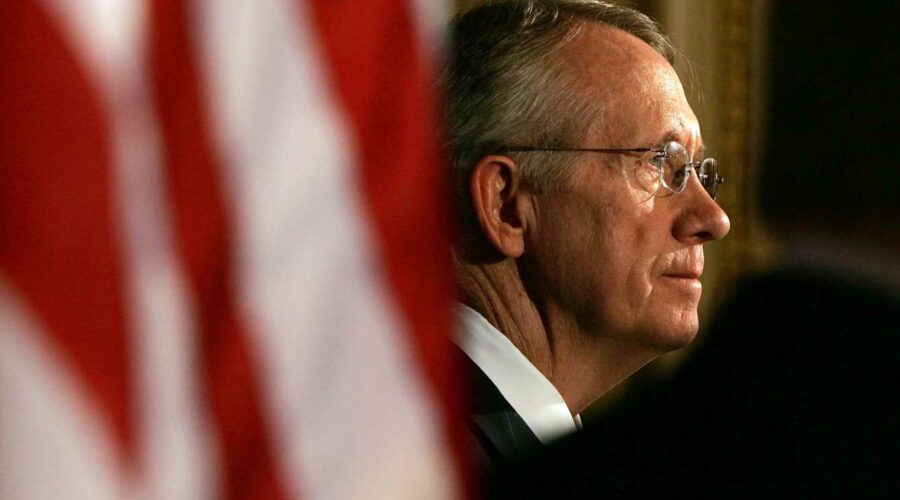 Reid was a dominating figure in Democratic politics for decades, using his home base in Nevada to rise to the top of the Senate. As majority leader from 2007 to 2015, Reid proved a steady hand, guiding passage of the bank bailouts, the Recovery Act and the Dodd/Frank re-regulation of Wall Street. He also won the landmark passage of Obamacare in 2010. Serving in Congress for more than three decades, Reid left his mark by building a political machine that has turned the once-purple state dependably blue. His political clout also helped halt construction of the Yucca Mountain nuclear waste repository outside sprawling Las Vegas.

If 'Dems Are in Disarray,' Blame Corporate Cash

For his many accomplishments, Reid’s leadership tenure was also defined by his Republican counterpart, Mitch McConnell, whose cynical obstructionism corroded the culture of comity in the Senate. The dysfunction and delay McConnell created ultimately forced Reid to abandon the filibuster for judicial nominations, allowing judges to be confirmed by a simple majority vote. Citing a backlog at the time of more than 100 judicial nominations, Reid told the New York Times, “I had no choice. Either Obama’s presidency would be a joke or Obama’s presidency would be one of fruition.” (McConnell has since reaped a reward for Reid’s shift, using a thin GOP majority to pack the federal courts with President Trump’s partisan and often poorly qualified jurists.)

Harry Reid’s path to power was far from preordained. Raised dirt-poor in Searchlight, Nevada, Reid grew up in a shack with no hot water and no indoor toilet. He completed his high school studies by hitchhiking into Henderson, Nevada, where he took up boxing under the tutelage of Mike O’Callaghan, who would go on to become the state’s governor, with Reid serving as his lieutenant governor.

In the late 1970s, Reid served as Nevada’s gaming commissioner, overseeing shady casinos that had not yet been Disneyfied for the masses. Reid’s tenure is referenced by the Martin Scorsese film Casino, and there were certainly cinematic moments: When casino owner Jack Gordon tried to bribe Reid, Reid responded by calling in the FBI. But Reid lost his cool during the sting operation, shouting, “You son of a bitch, you tried to bribe me!” as he attempted to choke Gordon, forcing federal agents to pull him away. Gordon served six months in prison. Two years later, an unexploded bomb was discovered under Reid’s family station wagon. Reid reportedly blamed Gordon, though no link was ever established by law enforcement. Gordon, who later married LaToya Jackson, died in 2005.

Reid was elected to the U.S. House in 1982 and then to the Senate in 1986. As a politician, he was never a natural in front of the cameras. He had a soft voice that could not carry the punch of his words. I interviewed Reid in his office as majority leader late in the George W. Bush presidency. I was struck by the sweep of his life, how this child of the desert and the Depression was now cradled by the marbled opulence of his Senate office. He kept a Fiji water bottle in a form-fitting silver coozy on a side table. Reid was stiff, but not entirely square, quoting Dr. Hook & the Medicine Show to ask if he’d make it “On the Cover of the Rolling Stone.”

Politically, Reid was just as difficult to peg. A Mormon, he was late to endorse same-sex marriage, which he finally did in 2012. But Reid said he found the Democratic Party’s focus on lifting up the unfortunate consistent with his creed. “My faith and political beliefs are deeply intertwined,” he told a crowd at Brigham Young University in 2015. “I am a Democrat because I am a Mormon, not in spite of it.”

As majority leader, Reid understood politics as a contact sport. During the 2012 campaign, he famously goaded Mitt Romney into producing his tax returns by circulating a fake rumor that the Republican hadn’t paid taxes for a decade. But Reid did not rule his caucus with an iron fist, and individual senators took advantage of the running room to shape legislation — often to the detriment of the country. Montana Democrat Max Baucus wasted months fruitlessly trying to marshal unneeded GOP support for Obamacare — imperiling its passage when Sen. Ted Kennedy died. Connecticut’s Joe Lieberman scuppered a deal to include a Medicare buy-in option for the bill.

Reid’s meek presentation was accentuated in his last years in office after a freak accident with an exercise band left him blinded in one eye. But through the end of his career in Congress, he remained a champion of the underdog. He stood as a passionate advocate for immigrants and Dreamers. And he lashed out at billionaires like the Koch brothers for trying to “buy” our democracy, insisting, “It’s time that the American people spoke out against…these two brothers who are about as un-American as anyone that I can imagine.”

In the era of Donald Trump, Reid attempted to alert the American public to the gravity of Donald Trump’s potential collusion with the Kremlin. In an open letter to then-FBI director James Comey in late October 2016, Reid wrote: “It has become clear that you possess explosive information about close ties and coordination between Donald Trump, his top advisers and the Russian government — a foreign interest openly hostile to the United States, which Trump praises at every opportunity.”

In Reid’s pre-election letter to Comey, he railed against the FBI director for his “double standard” and partisanship in hyping derogatory information about Hillary Clinton while staying mum about Trump’s Kremlin connections. “I led the fight to get you confirmed because I believed you to be a principled public servant,” Reid wrote. “With the deepest regret, I now see that I was wrong.”

That scathing, patriotic letter served as a capstone for Reid’s Senate career. But even after, Reid found sharp words to define the 45th president: “He is not immoral but is amoral,” Reid said of Trump. “Amoral is when you shoot someone in the head, it doesn’t make a difference. No conscience.” He added: “I think he is without question the worst president we’ve ever had.”

Reid’s death was confirmed by Landra Reid, his wife of 62 years.

29/12/2021 Politics Comments Off on Harry Reid, a Take-No-Prisoners Champion of the Democratic Party, Dead at 82
Markets