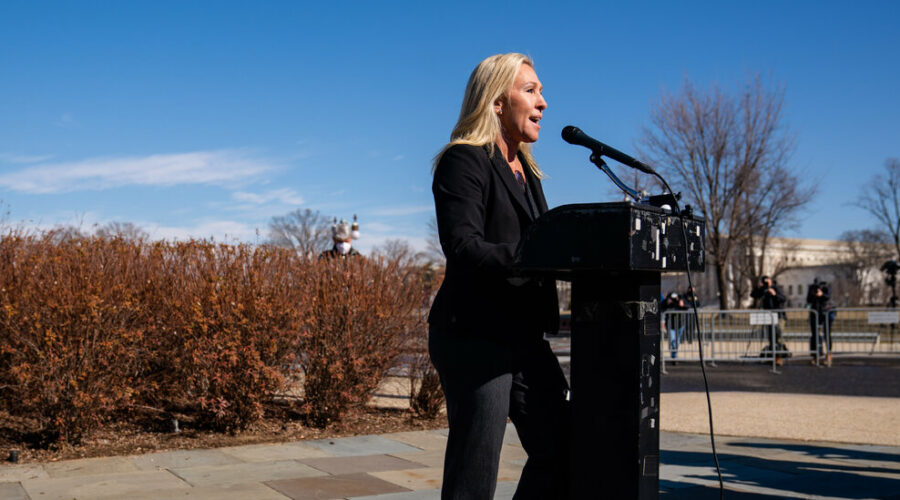 WASHINGTON — House Republican leaders on Tuesday broke nearly a week of silence about comments by Representative Marjorie Taylor Greene of Georgia comparing mask and vaccine mandates to the treatment of Jews by Nazis during the Holocaust, condemning her language but stopping short of punishing her.

The slow response by Representative Kevin McCarthy of California, the minority leader, to Ms. Greene’s string of anti-Semitic statements reflected the reluctance of top Republicans to take on the first-term congresswoman, who had previously endorsed violent and racist conspiracy theories and whose combative style has made her a favorite of former President Donald J. Trump and his far-right supporters.

The Republicans’ reaction was a contrast to their swift ouster this month of Representative Liz Cheney of Wyoming, whom they forced from her leadership post after she enraged her colleagues by vocally repudiating Mr. Trump’s election lies.

Instead, Mr. McCarthy issued a sternly worded statement that rebuked Ms. Greene but also referred to “anti-Semitism on the rise in the Democrat Party” and made no mention of further consequences.

“Marjorie is wrong, and her intentional decision to compare the horrors of the Holocaust to wearing masks is appalling,” Mr. McCarthy said. “The Holocaust is the greatest atrocity committed in human history. The fact that this needs to be stated today is deeply troubling.”

His statement was quickly followed by condemnations by the other two top House leaders and Senator Mitch McConnell of Kentucky, the minority leader, who denounced Ms. Greene’s statements as “outrageous” and “reprehensible.”

The congresswoman’s latest remarks, in which she said that employer-mandated proof of vaccination was “just like the Nazis forced Jewish people to wear a gold star,” highlighted the political vise she has created for Republicans.

Stripped of her committees by Democrats and bringing in eye-popping fund-raising totals each time she stokes controversy, Ms. Greene appears to have grown emboldened to engage in increasingly brazen behavior, disdainful of her own party’s leaders and eager to capitalize on the next firestorm of her own making.

On Tuesday, just after Mr. McCarthy scolded her, Ms. Greene retweeted — and then quickly deleted — a post calling him a “moron” and “feckless,” using an expletive for emphasis.

Mr. McCarthy, who declined to strip Ms. Greene of her committee assignments for anti-Semitic and violent statements she made before she was elected, has remained loath to punish her since she came to Washington, in part for fear of elevating her platform and also to avoid alienating voters enthralled by her conspiratorial brand of politics.

In an interview with a conservative television host last week, Ms. Greene compared Speaker Nancy Pelosi’s insistence that lawmakers get vaccinated before removing the House’s mask mandate to how Jews were “put in trains and taken to gas chambers in Nazi Germany.”

In the past week, Ms. Greene has continued to equate universities barring unvaccinated students from attending classes in person to the Holocaust and referred to four progressive congresswomen — all women of color, two of whom are Muslim — as “the jihad squad,” equating their vocal critiques of Israel’s government and support for Palestinian rights to anti-Semitism and backing for Hamas.

Republicans on Tuesday quickly tried to shift attention from Ms. Greene’s comments to Democrats, whom they have tried to paint as insufficiently supportive of Israel, introducing resolutions in the House and Senate condemning anti-Semitism. But their job was made harder by the congresswoman, who refused to apologize for her comments and insisted that she had never compared mask mandates specifically to the Holocaust — “only the discrimination against Jews in the early Nazi years.”

The condemnations by Republican leaders came after a rebuke from the Republican Jewish Coalition, a prominent organization whose political action committee contributes generously to the party. Matt Brooks, the executive director, called Ms. Greene “an embarrassment to yourself and the G.O.P.”

“Please educate yourself so that you can realize how absolutely wrong and inappropriate it is to compare proof of vaccination with the 6million Jews who were exterminated by Nazis,” he wrote on Twitter in response to one of Ms. Greene’s broadsides.

Still, in a reflection of how eager Republicans were to shift the unwelcome spotlight to Democrats, Mr. Brooks — who recently pinned a message on his Twitter feed imploring voters to remember in November that “there is only ONE pro-Israel party” — said in an interview that party leaders had responded appropriately to Ms. Greene’s comments.

“It’s immediately and strongly condemned by the House minority leader, the whip, the leadership and countless members of Congress who have called her out,” Mr. Brooks said.

“What that crystallizes is the stark contrast with the silence of Democrats,” he added, saying that House leaders including Ms. Pelosi had not pushed back on “dog whistles” being sounded by progressives.

Ms. Pelosi, in fact, called on Representative Ilhan Omar, Democrat of Minnesota, in 2019 to apologize for invoking anti-Semitic tropes in a series of tweets, including one from 2012 in which she wrote that Israel had “hypnotized the world” into ignoring their “evil deeds.” Ms. Omar apologized, but Republicans have since sought to paint some of her and other progressive lawmakers’ comments criticizing the Israeli government’s treatment of Palestinians as anti-Semitic.

On Tuesday, Ms. Pelosi called Ms. Greene’s most recent comments “beyond reprehensible” but sidestepped the question of whether she should be censured or expelled from Congress for them.

“I think she should stop talking,” Ms. Pelosi said.

Ms. Greene has a long history of bigoted and violent statements. Citing Mr. McCarthy’s refusal to act, Democrats moved to strip her committee assignments this year because of a series of social media posts she made before she was elected, in which she endorsed assassinating Ms. Pelosi. Ms. Greene was also a prolific writer for a now-defunct conspiracy blog, writing posts with headlines including “MUST READ — Democratic Party Involved With Child Sex, Satanism, and The Occult,” and arguing that the 2018 midterm elections — in which the first two Muslim women were elected to the House — were part of “an Islamic invasion of our government.”

She also suggested that a wildfire that ravaged California was started by “a laser” beamed from space and controlled by a prominent Jewish banking family.

Ms. Greene has only become more strident. Unmoored from the normal strictures of congressional committee work, she has railed against liberals and the so-called RINOs she sees leading her party in Mr. Trump’s absence on right-wing television and radio shows. She has held rallies with Representative Matt Gaetz, Republican of Florida, who is being investigated by the Justice Department for alleged involvement with several young women who were recruited online for sex.

Representative Brad Schneider, Democrat of Illinois, introduced a resolution on Tuesday to censure Ms. Greene for her most recent remarks.

“Rep. Marjorie Taylor Greene continues to debase not only the memory of 6 million Jews murdered by the Nazis, but all those who fought and died defending democracy against Hitler and his evil,” Mr. Schneider said in a statement. “It is shameful that the Republican conference continues to let her define their party, and dangerous that they refuse to expel her.”

27/05/2021 Politics Comments Off on Greene’s Holocaust Comparisons Cause New Headaches for G.O.P.
Markets