WASHINGTON ― Seeking to defend Donald Trump in the unfolding scandal that threatens his presidency, some Senate Republicans are tiptoeing toward a new message that involves questioning the integrity of a highly respected American diplomat who served under former President George W. Bush.

William Taylor is a West Point graduate with a long career in government. He’d served as America’s top diplomat in Ukraine before, from 2006 to 2009. Taylor’s stature makes his congressional testimony ― in which he raised concerns about an “irregular” foreign policy channel run by Trump’s personal attorney Rudy Giuliani, one that conditioned a meeting between Trump and the president of Ukraine on the opening of an investigation into Joe Biden and his family ― damning for the president.

Most GOP lawmakers deflected queries about the substance of Taylor’s remarkable 15-page opening statement on Wednesday, complaining instead about process and the Democrats’ closed-door impeachment inquiry in the House. But some sought to dismiss the testimony outright, arguing that the account of the acting ambassador to Ukraine was merely his “opinion.”

Cramer claimed further that Taylor offered “no evidence” of a quid pro quo relating to assistance for Ukraine, panning his opening statement as “hearsay.”

Sen. John Cornyn (R-Texas) similarly shrugged off Taylor’s testimony, telling a reporter, “I don’t know him better from Adam. I know you better than I know Bill Taylor.” (Taylor was unanimously confirmed by the Senate in 2006, four years after Cornyn joined the upper chamber.)

But Sen. Lindsey Graham (R-S.C.) demurred, telling reporters, “The best way for us to judge Bill Taylor is for us to hear from him ― not read about him.”

Trump, meanwhile, targeted Taylor in a tweet Wednesday, calling him a “Never Trumper Diplomat” whom he doesn’t know. The president also attacked John B. Bellinger III, Taylor’s attorney, who previously served in high-ranking State Department and White House positions during the George W. Bush administration. Bellinger did not immediately respond to a request for comment. 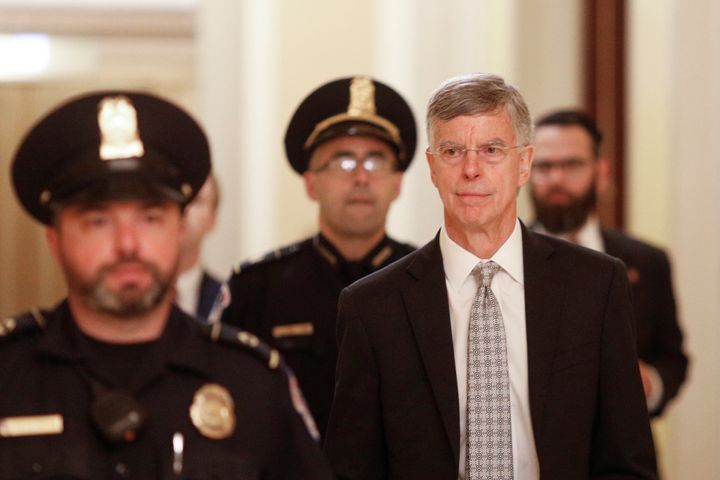 Asked about the White House statement on Wednesday, Sen. Ron Johnson (R-Wis.), who traveled to Ukraine earlier this year, offered a lone voice of support for Taylor even as he echoed his colleagues’ complaints about his testimony.

“I’ve only met with Ambassador Taylor I think only the one time. I’ve got respect for him,” Johnson said.

Taylor told investigators he was hesitant to take the job because he believed former Ambassador Masha Yovanovitch “had been treated poorly, caught in a web of political machinations both in Kyiv and in Washington.” But he said a senior Republican official who’d been a mentor to him urged him to take the position because “if your country asks you do to something, you do it ― if you can be effective.”

Much of the reaction to Taylor’s testimony among Senate Republicans on Wednesday was procedural in nature, hammering House Democrats for refusing to make public Taylor’s entire nine-hour testimony. Several news outlets obtained Taylor’s opening statement on Wednesday evening; it was not released formally by the three House committees conducting the impeachment inquiry.

“I’m not going to play that game. I’m not going to say I’m concerned about selective leaking. When he testifies in public, I’ll tell you what I think,” Graham said when asked about the statement. The South Carolina Republican, a top ally of Trump, accused Democrats of running a “concerted effort to drive the president’s numbers down to probably build a vote for impeachment.”

Sen. Roy Blunt (R-Mo.), the No. 2 Senate Republican, similarly declined to weigh in on the substance of Taylor’s testimony, stating that the process “makes it hard to know how to evaluate anything coming out of that committee right now.”

“When the testimony is secondhand and thirdhand, I’m not sure where that gets you,” he said.

Neither Taylor nor his attorney have disputed that the copy of his opening statement obtained by numerous media outlets is, in fact, his.

No Republicans whom HuffPost spoke to on Wednesday defended Trump on the substance of Taylor’s allegations ― that the Trump administration withheld assistance to Ukraine while pressing for an investigation into a political opponent.

“It is another very important piece of evidence we’ll have to weigh,” Sen. Susan Collins (R-Maine) said when asked about Taylor’s testimony on Wednesday, referring to the growing likelihood of an impeachment trial in the Senate in coming months.