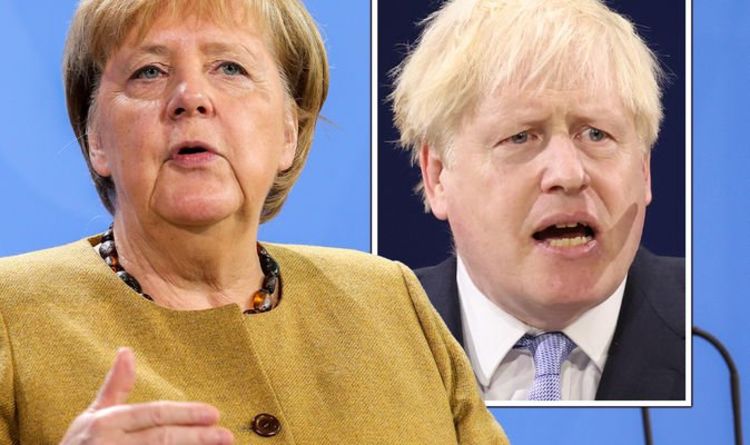 Britain and the European Union continue to be embroiled in a furious row over how to implement post-Brexit trading arrangements in Northern Ireland. The UK’s Brexit minister Lord Frost wants to overhaul large parts of the Northern Ireland Protocol, which was part of the divorce deal negotiated with the EU by Prime Minister Mr Johnson. Brussels has refused to cave to those demands, forcing Lord Frost to warn the UK is ready to trigger Article 16 – which allows either side to override large parts of the agreement – if fundamental changes are not made.

But now one of Germany’s leading newspapers has waded in on the row, attempting to mock Brexit Britain over the explosive row.

In a comment article for Munich-based Süddeutsche Zeitung, the newspaper’s head of politics Stefan Kornelius raged: “The British government is escalating the conflict with the EU over customs borders because it wants to distract from its problems after Brexit.

“Europe will not be able to tolerate that

“British negotiation techniques should be sufficiently known to the EU Commission after more than five painful years.

“And yet it is always remarkable how easily the Johnson administration calls into question arrangements to which it had just agreed to.”

The journalist referenced the row around the post-Brexit trading arrangements in Northern Ireland, adding it was the UK Government who accepted a customs border in the Irish Sea to avoid a hard land border between Northern Ireland and the Republic of Ireland.

But he claimed this mechanism has proved to be “impractical” and said: “Bureaucratic lack of imagination and the unwillingness to implement the agreement have destabilised the government in Northern Ireland, hindered deliveries to supermarkets and damaged the movement of goods as a whole.

“Of course, the British traders lose an established delivery area – and this on national territory.

“Johnson wouldn’t be prime minister if he didn’t serve the national furore with this fodder.”

Mr Kornelius also claimed UK negotiators have been “quick to finger point”, meaning all responsibility for the “destabilisation of Northern Ireland is placed on the EU, including all supply problems”.

He accused Britain of making “one demand after the other” without waiting for a response from the European Commission.

This, he claimed, confirms the impression the UK Government is “primarily concerned with ideological sovereignty at home”.

The German journalist went on to rage: “This style of negotiation was already the biggest irritation for Brussels during the hot Brexit phase.

“Even today it is part of the understanding that the form of the public debate by the British negotiator David Frost turns the situation absurd and makes the EU appear as a perpetrator, even though it is driven by British nationalism.

“It was Boris Johnson who signed the Northern Ireland Clause after winning the power struggle with Theresa May.

“And it is the Johnson administration that continues to need a scapegoat to divert attention from the country’s grave post-Brexit problems.

He added: “If the last attempt at appeasement fails, the EU will no longer be able to remain silent.

“Sometimes rudeness can only be answered with rudeness.”