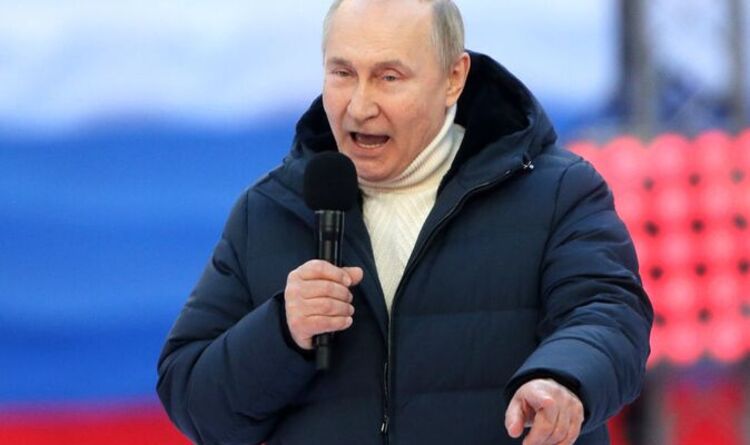 Angus Dalgleish said he noticed a “flatness” and “absence of emotion” in the Russian President’s face, which might indicate he has Parkinson’s disease. The Professor of Oncology at St George’s, University of London, also started by speculating if Putin had a thyroid issue as a result of the 1986 Chernobyl disaster, although Putin himself was a KGB officer in East Germany at the time.

He said: “It’s very common in east Europe and Russia due to Chernobyl.

“For some reason the thyroid was particularly susceptible to the radiation and caused cancer.

“However, I don’t think that per se would be the cause of his problems.

“He has for this taken these steroids and these are known to basically destabilise rage if taken for a long time and I believe he has been taking them for a long time.

“Also due to his judo etc, it is claimed that he has a very bad back and you can tell this by the way he walks.

“If he has had a very bad back for a long time, he is likely to have taken opiates which is a painkiller which had some effect on him.

“Now, with regards to the thyroid the treatment for it basically just leads to under activity.

“Looking at him as a doctor, I see a flatness to his face and it really raises what others have mentioned before about Parkinson’s disease and he really does show an absence of emotion in his face.”

Mr Dalgleish also speculated that Putin may have a brain tumour due to the way he had “acted and changed” in the last few years.

He said: “Looking at him 2 or 3 years ago and now, there is a symmetry to his face.

“Which raises the question in my mind and the way he’s acted and changed his behaviour, his disconnect and cognitive problem is whether he has a brain tumour.

“Where he’s followed not just by a thyroid cancer specialist but that he’s being followed by a neurosurgeon.

“This would actually fit if they are concerned if they have something more.

“So the thyroid cancer may well be a red herring and I don’t think it’s got anything to do with his behaviour and aggression.”

02/04/2022 Politics Comments Off on GB News: Putin health may be at risk as doctor predicts thyroid issues and cancer
Markets