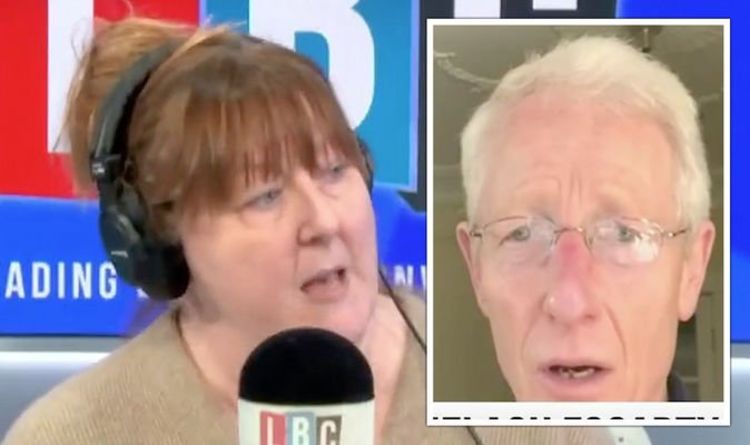 No 10 party investigation ‘not in public interest’ says Roberts

Stephen Roberts told LBC’s Shelagh Fogerty that “criminal law is the wrong way to hold people to account” and thus it was reasonable that no Met police investigation is going ahead into the alleged December 18 party that has sent the Government into chaos. But his claims sparked fury from Ms Fogerty who suggested the only people being held accountable for the party are the “dead people” who tragically lost their lives to covid.

Mr Roberts suggested that instead of the Met, it is in fact up to the Crown Prosecution Service to decide on the evidence put forward whether an investigation into the party was in the public interest.

He argued: “Whatever evidence was available, the Crown Prosecutor would have to decide whether or not the evidence was adequate to secure a prosecution…

“And would then have decided whether it was in the public interest that a prosecution should take place.”

He said that despite not being a “comfortable position” to hold in light of the backlash to the Christmas bash, he stressed there was “no public interest” in an investigation into it.

Despite Mr Roberts’s efforts to rid the Met of responsibility for investigating, Ms Fogerty slammed: “I think it is in the public interest if at that time, in the very building where these rules were being thought up…

“If they were having parties while the rest of us were facing [rules]… surely to God it is in the public interest for that to be not just revealed but someone be held accountable for it!

“I tell you who is being held accountable for it, the dead people and their relatives.”

Mr Roberts went further as he then claimed how the “political sphere” is where a decision on possible action on the party needs to be decided, not by the Met.

Ms Fogerty added how that if the public had used the excuse of covid breaches being a “political question” and not one to be dealt with by the police, as stated in the law, the police would not have tolerated such an excuse for a second.

The former standards boss went further, claiming that historical incidents of crime are “rarely” investigated retrospectively and the Downing Street Christmas party is no different.

But the former Met boss’ comments sparked a backlash on Twitter, with @Danj2203 slamming: “Members of the public were fined for breaking these rules. There are literally people in court as a result of rule breaches at the moment. This is in the public interest.”

@Isabelfarrell chimed: “Member of the public here, it’s in my interest.”

But @Sal_Salvatore_p offered an alternative angle, they added: “…do we really want to p*ss more public money down the drain investigating an office party a year ago Sincere condolences to those who lost friends and family, which includes me, but let’s concentrate on keeping the living alive End of.”

Prime Minister Boris Johnson has called on the Cabinet Secretary Simon Case to investigate the party, which took place during tier 3 restrictions in London and was originally reported by the Mirror newspaper last week.

But the saga took a turn after footage shocking footage obtained by ITV showed the Prime Minister’s former spokeswoman Allegra Stratton laughing about the party during a mock press conference four-days later.

Ms Stratton has since resigned amid the scandal as Boris Johnson said he was “furious” at the clip. But the Prime Minister now faces allegations of another six bashes that took place in Downing Street and Whitehall over the lockdown period.