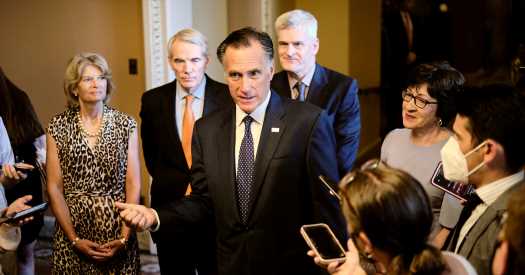 WASHINGTON — Donald J. Trump tried mightily to kill the $1 trillion infrastructure bill, hurling the kind of insult-laden statements and threats of primary challenges that for years sent a chill down Republican spines.

But the reaction inside the Senate, where many members of his party once cowered from Mr. Trump’s angry tweets and calculated their votes to avoid his wrath, was mostly yawns.

Now, the legislation appears on a glide path to pass the Senate with a small but significant share of G.O.P. support — possibly even including Senator Mitch McConnell, the Kentucky Republican and minority leader who rarely crossed the former president when he ran the chamber.

It is one of the most significant steps to date by elected Republicans to defy Mr. Trump, not only by the moderates who have routinely broken with him, but by a wider group that may signal his waning influence on Capitol Hill.

The bill has survived largely because most of the key Republican senators involved in negotiating it are not operating under his influence. And others willing to join them found the allure of a politically popular bipartisan accomplishment that would benefit their constituents stronger than their fear of Mr. Trump.

Senator Rob Portman, the Ohio Republican who led negotiations for his party, is retiring. Senator Mitt Romney, the former 2012 presidential nominee who has made his disdain for Mr. Trump plain, owes him nothing. Senators Susan Collins and Lisa Murkowski, moderates from Maine and Alaska, respectively, are not fans.

Even Mr. McConnell, who helped to orchestrate his two impeachment acquittals, now appears ready to buck the former president and embrace the infrastructure package.

“There is an excellent chance it will be a bipartisan success story for the country,” Mr. McConnell said last week, after joining 16 other members of his party in voting alongside Democrats to move forward with the measure.

The bill was on track to scale another procedural hurdle on Saturday, smoothing its path to likely passage.

The collective G.O.P. shrug in the face of Mr. Trump’s attacks could be fleeting. If the infrastructure measure demonstrates an alternative model for Republicans in the post-Trump era, it is not clear whether it represents anything more than a prominent exception to the rule that the former president still enjoys outsize sway over members of his party.

The vast majority of Republicans are opposed to the legislation. House Republicans are as tightly bound to Mr. Trump as ever, with many continuing to support his election lies and conspiracy theories about the Jan. 6 attack at the Capitol. And with the approach of the 2022 elections, members of his party will have less and less room to maneuver away from a figure whom their base still reveres.

Still, the success of the infrastructure effort was a notable — if tentative — move away from Mr. Trump. It suggested that at least some Republicans now believe there is more political upside to be gained from breaking with him than from siding with him unquestioningly, a shift from the calculus that drove them for years.

“I think they take their jobs more seriously than he ever took his,” said Republican strategist Scott Jennings, a former top campaign aide to Mr. McConnell, explaining why senators in his party were not swayed by Mr. Trump’s latest attacks.

Mr. Jennings said their motivation was not so much defying the former president as trying to undercut Democrats’ argument in favor of eliminating the filibuster — namely, that the G.O.P. is a party of unreasonable and irresponsible acolytes of Mr. Trump who will reflexively reject any proposal that Democrats support. (Mr. McConnell is particularly insistent on preserving the rule setting a 60-vote threshold to advance legislation.)

It was not for lack of trying by the former president. Banned from social media, he beat away at proponents of the deal — including five senators who voted to convict him during his second impeachment trial this year on a charge of incitement of insurrection — via a string of rageful press releases. He called them RINOs (Republicans In Name Only), describing them as “weak, foolish, and dumb.” “Don’t do it Republicans — patriots will never forget!” Mr. Trump warned in one such missive. “If this deal happens, lots of primaries will be coming your way!”

At first, Republicans braced for a familiar flood of defections from the infrastructure bill, recalling similar instances when Mr. Trump was president and any critical word from him about a legislative initiative prompted a swift evaporation of G.O.P. support for the measure in question.

Instead, the response was crickets.

Ms. Collins and Senator Bill Cassidy, Republican of Louisiana, calmly pointed out that Mr. Trump had supported a much larger infrastructure plan in the past but failed to deliver. Mr. Portman, who had personally called Mr. Trump to encourage him to back the legislation, politely suggested that Mr. Trump change tactics and embrace the plan.

When the time came to vote to advance the measure on the Senate floor, the coalition of mostly moderate members found that, contrary to Mr. Trump’s efforts, the number of conservative senators supporting their plan had increased, not decreased — with members of Republican leadership, including Mr. McConnell and Senator Roy Blunt of Missouri, who is also retiring, joining their ranks.

Senator Kevin Cramer, Republican of North Dakota, said some of his constituents were “mad as hell” about his support for the bill — particularly about the idea of doing something that would make President Biden look good. But rather than follow Mr. Trump’s lead, he has made a point of talking up the agreement on conservative talk radio shows.

Several Republican aides said the developments left them feeling that while Mr. Trump’s influence over the Senate was not gone, he was diminished.

Indeed, many Republicans said they were puzzled over the point Mr. Trump was trying to make. The former president had proposed a $1.5 trillion infrastructure package while in office, so his opposition to a leaner bill seemed motivated either by personal pique or a simple desire to see his successor and the opposing party fail.

“It’s not really so clear what Trump’s substantive objection is here,” said Philip Wallach, a senior fellow at the conservative American Enterprise Institute. “He’s certainly not saying doing an infrastructure bill is bad; he spent his whole four years talking about how great it would be. So all he’s really saying is, ‘Working with Democrats is bad.’ And for a lot of these senators from closely contested states, they figure their electoral base just doesn’t agree that bipartisanship is bad.”

That opinion may ultimately prevail with the bulk of his party. Many Republican congressional candidates are aligning themselves with the former president in opposition to the plan.

In the aftermath of the agreement, former Representative Mark Walker, a Republican running to replace retiring Senator Richard Burr of North Carolina, applauded the nearly three dozen senators who voted against advancing the infrastructure bill for upholding fiscal responsibility. Josh Mandel, a Republican seeking Mr. Portman’s Senate seat who has been endorsed by Mr. Trump, has called the bill a “full-out assault” on cryptocurrencies. And, Kelly Tshibaka, Mr. Trump’s anointed challenger to Ms. Murkowski in Alaska, has also bashed the proposal.

“The political theater is simply to give the appearance of working across the aisle, with the Republicans being used as window dressing,” Ms. Tshibaka said in June. “Lisa Murkowski either doesn’t realize it, doesn’t care, or is reading off Biden’s script.”

Amanda Carpenter, who worked for former Republican Senator Jim DeMint of South Carolina and Senator Ted Cruz of Texas, said the infrastructure bill is a safe space for G.O.P. lawmakers to break with Mr. Trump, because the party base is less focused on federal spending than it is on “culture war stuff,” like race and coronavirus restrictions, on which the former president has stoked outrage.

“The people who are getting most animated about this are the ones who are most likely to do whatever Trump says, because they depend on his endorsement for their political futures,” said Ms. Carpenter, the director of Republicans for Voting Rights.

Senators like Mr. Portman, Mr. Romney and Ms. Collins, by contrast “aren’t dependent on Trump for their political future.”

So when Mr. Trump issued his latest broadside against the infrastructure bill early Saturday morning, calling it a “disgrace” and suggesting falsely that it would impose new federal tracking on all drivers in an effort to tax them, there was little sign that the bill was in peril.

Even the former president seemed to be bracing for the possibility that a crucial bloc of Republican senators was no longer listening to him.

“If it can’t be killed in the Senate,” he wrote, “maybe it dies in the House!”

07/08/2021 Politics Comments Off on For G.O.P., Infrastructure Bill Is a Chance to Inch Away from Trump
Markets