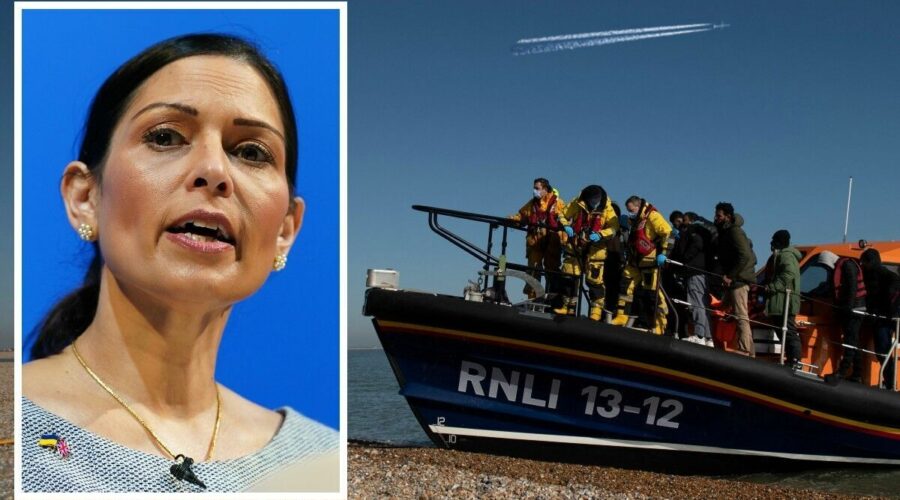 Under exceptional laws introduced by Home Secretary Priti Patel, illegal migrants that crossed the Channel into Britain will be sent to Rwanda in a £120m plan. Critics of the plan have questioned the huge financial burden of the scheme, with others raising concerns over human rights. Now, a charity has intervened and scuppered plans for the first flight leaving for the African nation.

The move to block the flights was anticipated by the Government as they predicted a string of legal challenges.

The Home Office agreed to hold any flights to remove migrants to Rwanda until after June 6 following “pre-action” letters sent this week by the charities claiming the policy breaches the refugee convention and human rights law.

The charities – Care4Calais and Detention Action – and the Public and Commercial Services (PCS) union are understood to be preparing legal claims both by individual migrants and against the broader policy.

Plans by the Government had initially wanted the first one-way flight of asylum seekers to leave the UK by the end of May.

News of the action causing the delay was announced by Clare Mosely, the founder of Care4Calais.

The charity is now made up of over 5,000 volunteers, who work together to provide access to services including medical aid, legal advice and other public incentives.

Aside from the volunteers, over 100,000 people have donated to the charity as it grows.

Speaking of the planned move to send the migrants, Ms Mosely said: “Sending them to Rwanda would breach their rights, cost taxpayers millions and break international law.

“We’re fighting it, and we believe the public will support us.”

Fifty migrants were informed by the Government last week of the intention to send them to Rwanda on the first chartered flight.

Under regulations, the notice gave them 14 days to present any representations, before a five day mandatory detention period prior to their departure.

At least eight of the 50 are understood to have been contacted by the charities with the offer of legal support.

Both Prime Minister Boris Johnson and Ms Patel have stated they accepted it would “take time” to launch the scheme, with delays largely due to “left-wing” lawyers.

A Government source told The Telegraph: “They have claimed a win when there isn’t one.

“We never said when we would send the first flight.

“It is just confirming it won’t be before June 6.”

Speaking of the current situation, Ms Patel said the Home Office was “pushing ahead with delivering this world-leading plan which epitomises the kind of international approach that is required to tackle an international challenge like the migration crisis”.

On Wednesday, the Home Secretary travelled with Vincent Bruta to Geneva to urge the UN Refugee Agency to stop rubbishing the policy, saying there was an “urgent moral imperative” to send migrants to Rwanda.

After the meetings, she said: “Rwanda and the UK stand together in promoting a new, fairer, more effective global asylum system.

“Our Rwanda policy will deter criminality, exploitation and abuse while supporting the humane and respectful treatment of refugees.”

Is the scheme a viable solution to the migrant crisis? Should traffickers face punishment instead of migrants? Why is France not doing more to prevent crossings from Calais? Let us know your views and opinions by CLICKING HERE and joining the debate in our comments section below – Every Voice Matters!

Enver Solomon, chief executive of the Refugee Council, said: “The Government’s determination to push ahead with treating any person fleeing war or oppression, including those escaping Ukraine and Afghanistan, as a commodity to be shipped to Rwanda is appallingly cruel and will cause great human suffering.

“We urge the Government to immediately rethink its plans and focus on workable alternatives such as providing more safe routes including allowing people to apply for humanitarian visas.

“The Government must also begin a meaningful dialogue with the French and other European nations to share responsibility for providing people seeking asylum across Europe with the opportunity to have a fair hearing.”

A Home Office spokesman said: “We are fully committed to our partnership with Rwanda.

“It fully complies with international and national law and we will defend any legal challenge robustly.

“We are putting this plan into action and have started to notify those who are in scope to be relocated to Rwanda, with more people notified this week.

“The first flights are expected to take place in the coming months, legal action has not yet had any impact on this.”