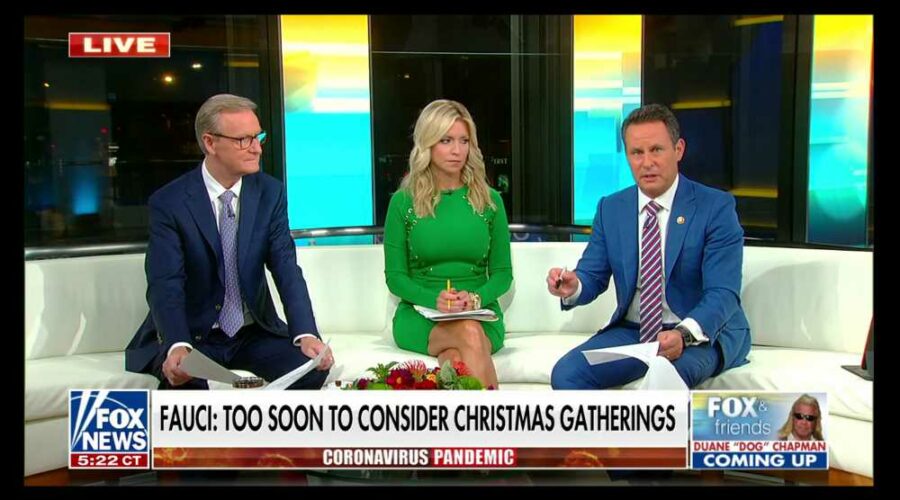 Conservative footsoldiers in the War on Christmas are attacking Anthony Fauci for saying it is “too soon to tell” if families will be able to gather safely for Christmas this year.

Fox & Friends host Brian Kilmeade accused Fauci of being “about to cancel Christmas” on Monday, reacting to the doctor’s appearance on Face the Nation the day before, even though the nation’s top epidemiologist said nothing close to suggesting Christmas be canceled.

The hosts were discussing supply chain interruptions caused by the pandemic and complaining that “nobody wants to work anymore.”

“There aren’t enough people to make the stuff. All sorts of things you’re not gonna get it in time for Christmas,” Steve Doocy said.

New Doc Shows How Dr. Anthony Fauci Became a Hero to Same, Villain to Others

“We need incentives to get people back to work,” Kilmeade chimed in. Note, however, that the supplemental unemployment insurance that conservatives claimed kept people out of the workforce expired earlier this month.

“No wonder Dr. Fauci’s about to cancel Christmas. We’re not gonna have any presents anyway, so it’s gonna really work out,” Kilmeade whined.

“Forget about Dr. Seuss with the Grinch,” Doocy said. “We have Dr. Fauci.”

But Fauci never said anything about canceling Christmas. When asked by host Margaret Brennan on Sunday, “We can gather for Christmas, or it’s just too soon to tell?” Fauci responded, “It is just too soon to tell. We have to concentrate on continuing to get those numbers down and not try to jump ahead by weeks or months and say what we’re going to do at a particular time.”

Fauci’s comments drew the ire of conservatives on Twitter, including two Republican members of Congress, who aired their frustrations with the doctor for refusing to make a prediction about where Covid numbers would be 82 days from now.

Rep. Andy Biggs (R-Ariz.) wrote, “I don’t know what Fauci would do without Covid.”

“I would like to inform Biden and Fauci that regardless of what they say, Americans are celebrating Christmas,” tweeted Rep. Claudia Tenney (R-N.Y.).

When writer Molly Jong-Fast replied to Tenney and pointed out that December 25th is many days away, Tenney tweeted back, “Christmas is a state of mind. It’s every day.”

And the war marches on.