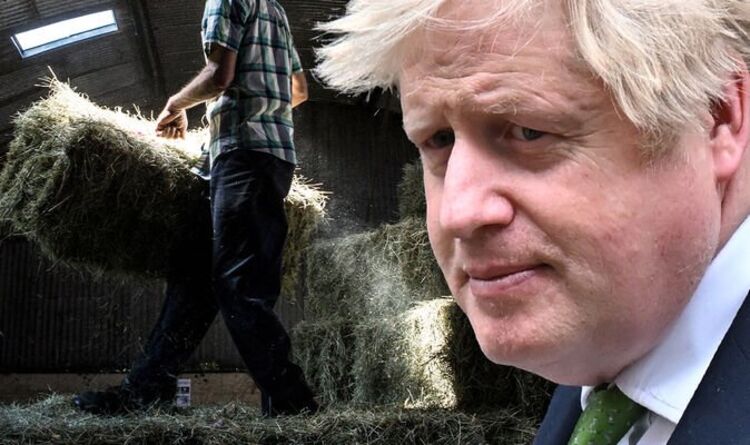 National Farmers’ Union President Minette Batters told attendees at her organisation’s annual conference in Birmingham the Government had “completely contradictory” policies for the agricultural sector. These include moving the goalposts for environmental standards in Britain yet continuing to pursue Brexit trade deals which seemingly back lower standards overseas. She highlighted other factors such as making it increasingly difficult to find enough workers to harvest or process domestic food, as well as failing to prioritise resources to open up new export markets.

Ms Batters expressed fears over the impact the Russia-Ukraine conflict may have on UK farming, with the two countries producing nearly a third of global wheat exports between them, and economic pressures including 200 percent inflation in fertiliser costs.

The NFU leader fumed: “Yet while there is a cost of living crisis looming and an increasingly unstable world, the UK Government’s energy and ambition for our countryside seems to be almost entirely focused on anything other than domestic food production.

“Whether it’s reintroduction of species; an ambition to set 30 percent of our land aside, or a payment system almost in opposition to food production.”

She also warned the sustainable farming incentive, which the Government hopes will see 70 percent of farmers take up as an environmentally-friendly farming replacement for the European Union subsidy scheme, will be under-funded.

The Government has said a third of the total budget for the “environmental land management scheme” (Elms) would go to the sustainable farming incentive.

In addition, another third is being aimed at large-scale nature schemes including rewilding, with the remaining third being directed to farm-level wildlife projects.

But Ms Batters warned: “This country needs a strategy and a clear vision for what we expect from British farming.

“Do we want and expect different things from our land than the rest of the world?

“A pretty park at home while we tuck into imported food produced in extremely intensive ways with huge environmental impact somewhere else.

“Are we turning a blind eye to the impact of global food production while we pursue a domestic vision of a chocolate box countryside?” she asked.

Shadow Environment Secretary Jim McMahon told the conference ministers must should use the Elms scheme, which was “entirely within the Government’s control”, to help farmers with issues they are experiencing with post-Brexit trade, labour shortages and high inflation.

Following Brexit, the Tories are moving the £2billion a year paid to English farmers from a subsidies-based system largely based on the amount of land farmed to the new Elms programme.

But this has left the farming community have been left furious, with payments under the old scheme already being reduced.

He commented: “There is money in the system to say to farmers, we can give you a bit of breathing space to go through this uncertain time on cost-of-living, on Brexit, come through the pandemic, that will just give you a bit more time to settle.

“We’ll then look to reform, on a more transitional basis, Elms that helps our biodiversity and our nature. That would be a pragmatic thing to do.”

Mr McMahon also took a swipe at the Government over the labour shortage issue, saying it could be solved “today” but raging its latest attempt had been “clouded with incompetence”.

22/02/2022 Politics Comments Off on Farming outrage: Boris accused of dropping ball on Brexit as British produce thrown aside
Markets