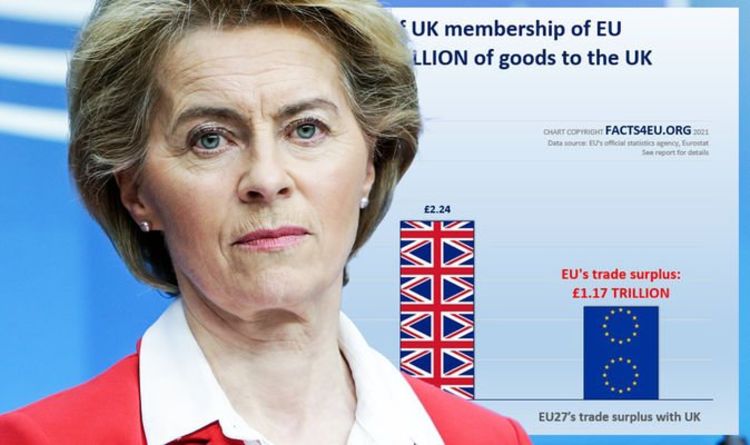 And the Facts4EU’s report also underlines the fact that the EU sells more to Britain than almost 200 other nations combined. The pro-Brexit think tank used figures from Eurostat, the EU’s own statistics division, to highlight the bloc’s trade surplus with the UK between 2006 and 2020, which marked the end of the post-Brexit transition period.

During that time, the EU sold exported goods worth £3.41trillion, with goods worth £2.24trillion going the other way – a surplus of £1.17trillion.

The value of goods sold to the UK is more than the total sold to 190 other nations combined, and exceeds exports to the United States, China, Russia, Japan, or to any other single country in the world.

Leigh Evans, chairman of Facts4EU, said the report proved beyond all doubt that Britain really does deserve the nickname “Treasure Island”.

The EU’s Single Market has benefited the EU, not the UK

He added: “The EU’s Single Market has benefited the EU, not the UK.

“Let’s be clear: The EU’s Single Market has always been about the trade in goods, not services.

“It involved the elimination of tariffs on goods, and our report shows quite clearly how the EU has profited from having the United Kingdom as a member.”

Some 80 percent of the UK’s economy was based on services, Mr Evans pointed out.

He added: “The EU did of course pay lip service to services, partly because its second-largest member – the UK – has such a strength in this area.

“Nevertheless, the Single Market has never worked in any meaningful sense for services.

DON’T MISS
Afghanistan LIVE: Johnson makes urgent plea to save trapped Britons [WORLD]
When you will have to self isolate as rules change for double jabbed [UK]
BBC viewers ‘switch off’ as they slam Team GB Homecoming Concert [TV]

“Just ask any British plumber, electrician, accountant, architect, or lawyer how easy it is to do any business in the EU.”

Mr Evans added: “If any Rejoiners are still in any doubt, they may wish to question why the EU refused to discuss services as part of the ‘UK-EU Trade and Cooperation Agreement’ which the Prime Minister signed last year.

“That ‘trade deal’ only involves goods. Financial services – where the UK is a world-beater in so many areas – was deliberately excluded by the EU.”

Commenting on Facts4EU’s report on its website, Martyn Owers said: “For 43 years, the UK paid for the privilege of subsidising and buying German manufactured goods and French agricultural products.

“That’s the UK’s membership of the EU in a nutshell.”

Facts4EU’s report follows on from another earlier this week examining the relative benefits of membership, in terms of trade in goods and services with other EU countries as a percentage of overall GDP, using the bloc’s European Commission’s Single Market Scoreboard 2020 – the last to feature the UK – as a yardstick.

Sir John Redwood, the MP for Wokingham, as well as being a member of the European Research Group (ERG) said: “The more revealing figures show the UK’s growth rate fell after we joined the EEC and fell again once they completed the single market in 1992.

“That was why some of us campaigned to leave the Single Market as well as leaving the EU.

“The Single Market was designed against us and promoted continental exports to us to replace our home production.”