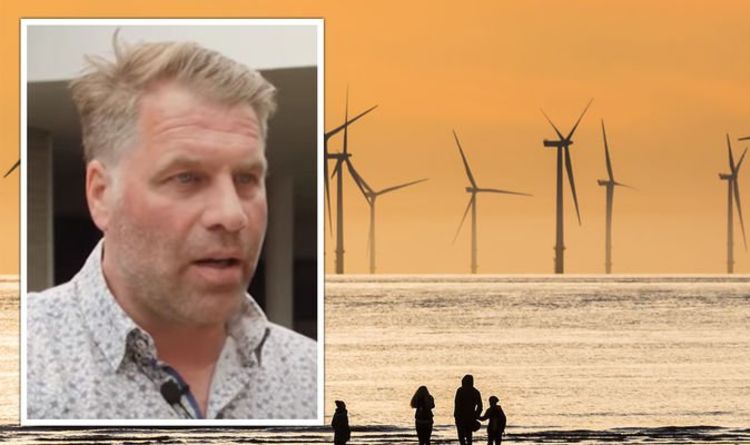 Mayor of De Panne Bran Degreick has hit out at France’s eco-friendly plans as the imposing wind farm will restrict views of the horizon and upset homeowners who bought a house for the ocean view. Belgian Justice minister Vincent van Quickenborne said: “A complaint will be lodged with the European Commission because our country has not been consulted about the location of the area, while European directives require it.”

Speaking to RT, Mr Degrieck said: “Since it is very close to the border, about 10km, it will be very from our beaches.

“This landscape and the feeling we have of liberty and seeing the horizon is actually our main product.

“For France, it is a very important project but doesn’t mean that you have to put all the burdens on the neighbours and take all the advantages as a nation.”

It comes as coastal and rural communities should be paid for hosting offshore wind farms to prevent a similar backlash to fracking, the Government has been urged.

Former energy secretaries Dame Andrea Leadsom and Amber Rudd have called for compensation for communities where onshore infrastructure such as underground cables, pylons and substations has to be built to connect offshore turbines to the grid.

They also say they support an offshore wind “ring main” where neighbouring farms in the sea work together to reduce the burden of infrastructure on communities.

They make their comments in the foreword of a report by think tank Policy Exchange, which calls for the Government to introduce mandatory “offshore wind wealth funds” for all new offshore wind farms.

It also calls for a package of reforms, which includes moves to improve coordination on new infrastructure that could save £3-£6 billion by 2050, warning that the current rules were likely to increase energy bills.

Funding from the wealth fund should pay for upgrades to community facilities, enhancing local services and improving people’s skills in the area, with a typical one gigawatt (1GW) offshore wind farm providing around £2 million a year to local projects for the first 15 years.

Without action, the report warns that offshore wind farms will increasingly face local backlash, similar to that seen for onshore wind farms and shale gas extraction through controversial fracking.

Local opposition including court challenges could hamper efforts to meet the Government’s ambition to establish 40 gigawatts of offshore wind by 2030, limiting jobs and slowing down emissions cuts, it said.

Despite being out at sea, and therefore having less impact than onshore wind or fracking operations, each offshore farm currently builds its own connection to the onshore network.

This can require significant infrastructure such as substations, in some cases the size of Wembley Stadium, digging up the countryside for laying cables, and new pylons, the report said.

Planned new farms are already causing significant concern in East Anglia and could lead to similar concerns in North Wales, Humberside and the east coast of Scotland as more offshore wind farms are developed, it said.

In the foreword, Dame Andrea and Ms Rudd said: “Local communities are rightly concerned about the sheer amount of infrastructure built by individual offshore wind companies and the Government must act.

“The Government should urgently carry out an audit of all outstanding plans for onshore infrastructure relating to offshore wind farms and consider ways to minimise the damage to precious inland areas.”