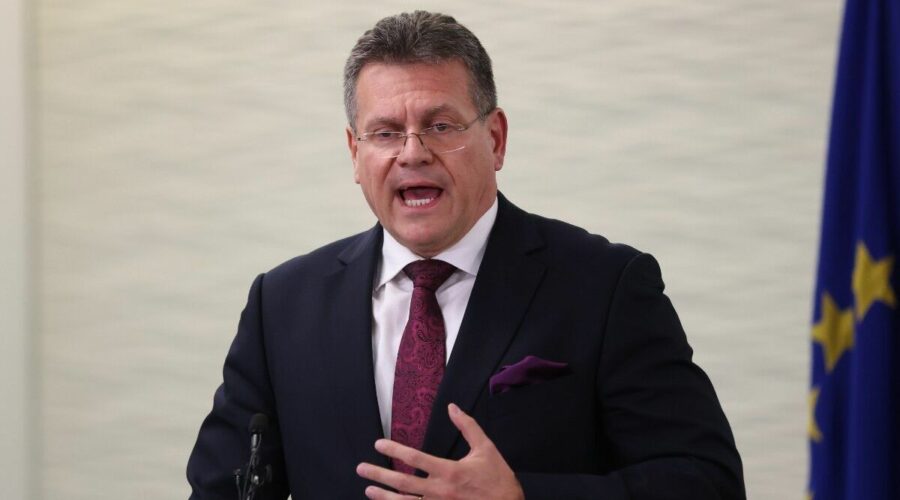 The European Union fears that a break from the Northern Ireland protocol by the British Government would result in “horror scenarios” for Brussels, BBC’s Europe editor has argued. Katya Adler believes the EU fears that the European single market would be left “vulnerable” in the event the Brexit trade rules agreed upon between London and Brussels were to be torn up by Boris Johnson’s Government.

Ms Adler told BBC’s Newscast: “There has been talk of, as you know, the EU is still trying to punish us the UK over Brexit and what Brussels says is no, this is not about punishing the UK.

“This is because if the protocol breaks, it leaves us with horror scenarios in the EU.

“Or the EU says the whole of the single market would be left vulnerable and that would you know, damage its reputation and therefore its value.”

It came as the  Foreign Secretary defended controversial plans to scrap parts of the post-Brexit deal on Northern Ireland, insisting the action to address the “very severe” situation in the region cannot be delayed.

The EU has threatened to retaliate with “all measures at its disposal” if the UK proceeds with new legislation overwriting sections of the Northern Ireland Protocol, as announced on Tuesday.

Liz Truss told the Commons she intends to bring forward the Bill within weeks, in an effort to reduce “unnecessary bureaucracy” and protect the Good Friday Agreement.

Asked about the move on Wednesday, she said it would be “very positive” if the UK and EU could negotiate a solution in parallel to the Bill’s progression through Parliament, and write this into the legislation.

Brexit ‘going to get messy and painful’ warns Adler

But she said the plans to rewrite parts of the deal to address the “very severe” situation in the region cannot be delayed.

Ireland’s deputy prime minister Leo Varadkar has said the British Government’s intention to publish legislation that would disapply of parts of the Northern Ireland Protocol is “not very respectful” to the British people.

Speaking on RTE Radio, minister for enterprise Mr Varadkar said that 59 of the Stormont Assembly’s 90 MLAs do not want to disapply the protocol, and the British public voted for the Brexit deal that is currently in operation, which includes the protocol.

He said: “This departure is not very respectful of the British people either because they voted for this in an election.

“They must understand what the consequences are for the Union.

“If they keep trying to impose on Northern Ireland things that Northern Ireland doesn’t want, that drives more people towards nationalism and away from support for the Union. And it just seems a bit puzzling.”

“Any modification of the protocol we can discuss,” Mr Varadkar added, but not the removal of it entirely.

He said a trusted trader system “is a possibility”, but added that there are “risks” to that proposal.