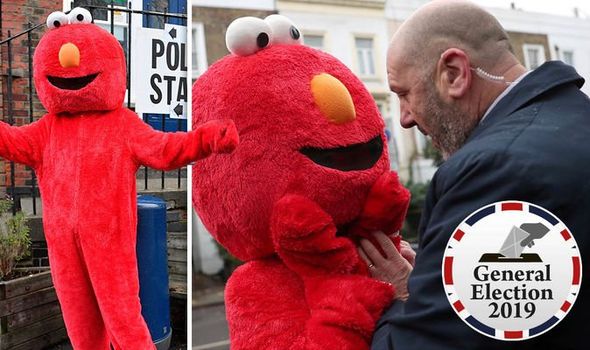 Voters across the UK are visiting their local polling stations to cast their votes in December’s election. While some are bringing along their pets, a rather odd character arrived at Labour leader Jeremy Corbyn’s consistency.

Mr Corbyn arrived at Pakeman Primary School in Islington this morning and was greeted by a small number of supporters as he arrived to cast his vote.

However, there was rather an odd addition to the crowd, a protester dressed as Sesame Street character Elmo.

As the woman in fancy dress argued with security and police, Mr Corbyn said: “Hello guys, can we stop the arguments please.”

The protester dressed as Elmo was restrained by security guards as she tried to approach Mr Corbyn as he entered the polling station.

Mr Corbyn later posed for photographs with well-wishers outside the polling station. 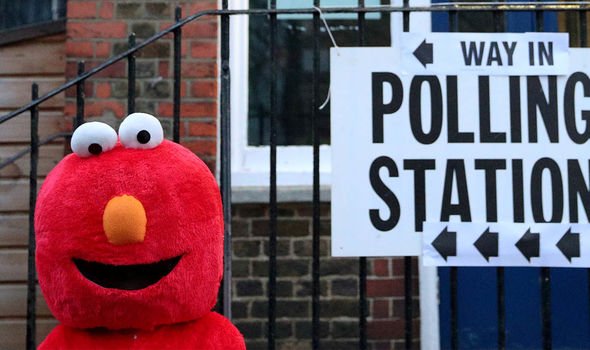 Elmo is a muppet from the children’s show Sesame Street. He is a furry red monster with a falsetto voice who hosts the segment “Elmo’s World”.

This isn’t the character’s first brush with British politics.

In the 2017 general election a man named Bobby ‘Elmo’ Smith was a candidate.

He tried to become the Member of Parliament (MP) for Maidenhead but lost out to former Prime Minister Theresa May. 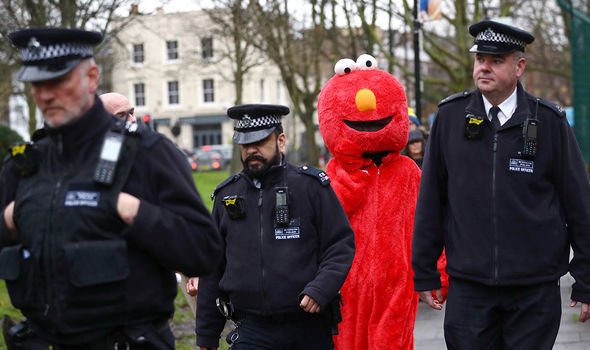 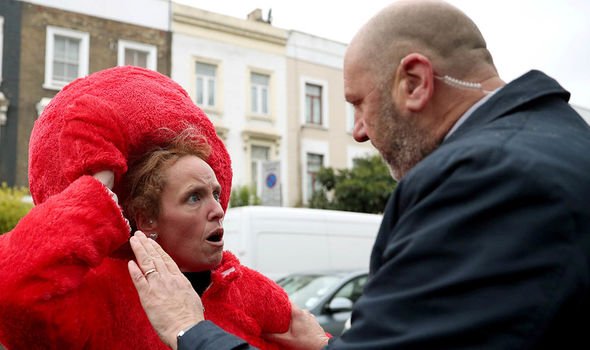 Dressed up as Elmo and bearing an Elmo rosette on his chest, Mr Smith only managed to get three votes.

Another weird but wonderful candidate in Mrs May’s constituency that year was Lord Buckethead.

Elsewhere former Liberal Democrat leader Tim Farron had a rather odd opponent in his Westmorland and Lonsdale constituency – Mr Fishfinger.

Almost anyone can put themselves forward to become an MP, however, there are certain criteria they must meet.

Polls across the country opened this morning at 7am, and will remain open until 10pm

Results are expected to start being announced in the early hours of Friday morning, and there will be an exit poll an hour or so after polls close.

Queues have been reported this morning at polling stations across the country, as voters brave the cold and wet weather.

Members of the public in a number of London constituencies have had to queue around street corners to vote in some of the busiest conditions they have seen.

Craig Fordham, 45, from Putney, who had to wait for 15 minutes said: “I’ve voted at the same station and time for eight years, but have never had to queue before,”

Chris Schofield queued for 20 minutes in the Bermondsey and Old Southwark constituency.

“Atmosphere is very London: orderly queueing and no-one is talking to each other!”

Mr Schofield said there were over 70 voters waiting outside, adding that there were at least three officers working at the station but only one taking addresses from voters.

Asked why he thought there were so many queuing, he said: “I think it’s the election of a lifetime for many of us.”

12/12/2019 Politics Comments Off on Election 2019: Who is Elmo? Who is Sesame Street character at Corbyn constituency
World News