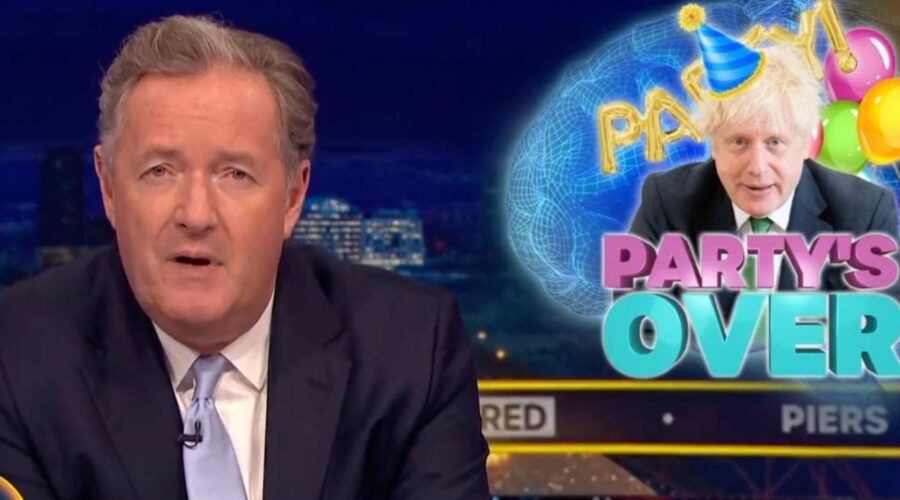 UK Prime Minister Boris Johnson has come under fire for having double standards when it comes to applying coronavirus rules with the 10 Downing Street staff and the rest of the country. The latest party gate photos show Boris Johnson raising a toast with at least six other staff members in Downing Street on 13 November 2020 when the rest of the country was abiding by strict lockdown rules. Talk TV presenter Piers Morgan went at him and Downing Street for taking the British public for fools and for lying repeatedly about their wrongdoing.

Speaking to Talk TV viewers, a seething Piers Morgan lashed out: “Tonight, one thing is crystal clear about party gate.

“We can’t trust a word that comes out of the Downing Street frat house about this whole tawdry affair.

“It’s now pretty clear that Boris Johnson has not only lied to the British people and the media, he’s also lied to Parliament.

“Whatever happened, the guidance was followed. And the rules were followed at all times”, Boris Johnson said.

Mr Morgan asked: “We all heard him, right? He said very clearly when asked whether there was a party on November 13, no.

“He said that to Parliament, to the country. And he said the rules were followed at all times.

“Now, remember the time when the country was in its second lockdown? Pubs were closed. Gatherings of two people or more were banned.

“Yet here is Boris Johnson, the Prime Minister, the man who made the rules, a glass raised in toast, bottles of booze and party food on the table.

“And there next to him, a government red box with all his prime ministerial papers. What was in that box?”

“Yet here is Boris Johnson, the Prime Minister, the man who made the rules, a glass raised in toast, bottles of booze and party food on the table.

“And there next to him, a government red box with all his prime ministerial papers. What was in that box?

“More details of new pandemic lockdown laws for the rest of the British public to obey.”

Speaking to the House of Commons, Boris Johnson said: “Mr Speaker, we expect everybody in this country to obey the law.

“Apart from him and all his staff at Downing Street.

“It’s now very clear that a lot of people in the corridors of power of number 10 Downing Street led by the guy at the top ignored their own rules and broke the law.

“And we now also know that two weeks ago, he had a secret meeting with Sue Gray, the very woman charged with investigating him and his staff.

“And when the meeting was exposed, one they hadn’t bothered to tell us about, Downing Street briefed it was all her idea.”

“And today Downing Street admitted: actually, it was their idea”, Mr Morgan continued.

“So, they lied again about a meeting that Boris Johnson wanted with the woman investigating him, just before the report comes out.

“And we’re supposed to believe this isn’t an independent report.

“Well, Sue Gray must now publish the report in full, including every one of the 500 photographs of parties she said to have collected.

“Let the public judge with our own eyes and make up our own minds”, Mr Morgan concluded.