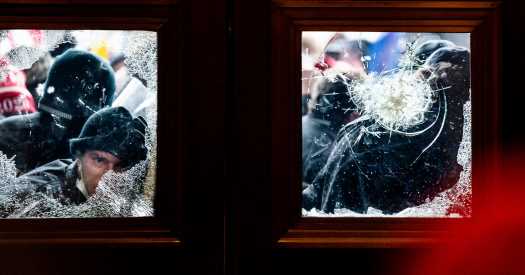 WASHINGTON — Scrutiny increased on Monday on how President Trump sought to foment anger at a rally of his supporters and then dispatched them to the Capitol shortly before they rioted last week, as House Democrats on Monday unveiled an article of impeachment accusing him of inciting an insurrection.

Here is an overview of some of the broader forms of legal jeopardy the president may be facing.

If a grand jury were to be persuaded that Mr. Trump intentionally incited his followers to violence, several statutes could come into play.

For example, Section 373 of Title 18 of the United States code makes it a felony to induce or even to try to persuade someone to engage in the criminal “use of physical force against property or against the person of another.”

The main federal statute against inciting a riot, Section 2101 of that same title, is complicated by requiring a tie to interstate travel or commerce. But the District of Columbia has a criminal law — Section 1322 of Title 22 of its code — that makes it a crime to incite a riot without any discussion of interstate issues.

Is there any chance Mr. Trump might be charged with a crime while he is president?

No. Although nothing in the Constitution says a sitting president is immune to prosecution and no court has ever ruled so, the Justice Department, dating to the Nixon administration during Watergate and reaffirmed by the Clinton administration during the Whitewater-Lewinsky scandal, has taken the position that presidents may not be charged with a crime while in office.

Would it be easy to charge Mr. Trump after he is no longer president?

No. Beyond steep political obstacles that the Justice Department would face under President-elect Joseph R. Biden Jr., there would also be severe legal challenges.

Because of First Amendment protections for freedom of speech, prosecutors would have to meet a particularly high burden of proof. The main Supreme Court precedent, the 1969 ruling Brandenberg v. Ohio, held that even advocating the use of force and violating the law is protected speech “except where such advocacy is directed to inciting or producing imminent lawless action and is likely to incite or produce such action.”

“Saying things that foreseeably move some audience members to act illegally isn’t enough,” Eugene Volokh, a law professor at the University of California, Los Angeles, who specializes in First Amendment law, wrote in a blog post for the libertarian magazine Reason.

“Speaking recklessly isn’t enough,” he added. “The court was well aware that speech supporting many movements — left, right or otherwise — that merely moves the majority to political action may also lead a minority of the movement to rioting or worse. It deliberately created a speech-protective test that was very hard to satisfy. And that test of course applies equally to all speakers, politicians or otherwise.”

Mr. Trump used a lot of violent imagery and insinuations as he whipped up anger among his followers, directed them to “fight much harder” and sent them to march on the Capitol, but he never expressly directed them to commit crimes. And he also stated, “I know that everyone here will soon be marching over to the Capitol building to peacefully and patriotically make your voices heard.”

Still, there has been agreement across ideological lines that Mr. Trump incited the riot.

Even former Attorney General William P. Barr, who was one of Mr. Trump’s most important enablers and allies before he resigned last month, has interpreted his conduct as “orchestrating a mob to pressure Congress,” calling Mr. Trump’s actions “inexcusable” and “a betrayal of his office and supporters.”

Was Trump’s speech an official act?

Jack Goldsmith, a Harvard Law professor, flagged another potential hurdle for prosecutors: The Justice Department’s Office of Legal Counsel — including Mr. Barr, when he ran it in 1989 — has written several legal policy memos holding that laws sometimes do not apply to a president engaged in official acts unless Congress has made a “clear statement” that it intended that.

That legal policy raises difficult questions for Justice Department prosecutors — and, potentially, the courts — including whether Mr. Trump’s speech to supporters about a political issue counts as an official act.

“The whole thing is, in truth, clouded with uncertainty,” Mr. Goldsmith said.

Could Mr. Trump end up barred from future office?

The post-Civil War 14th Amendment to the Constitution bars from future office people who “engaged” in an insurrection or rebellion even if they previously took an oath to uphold the Constitution as a lawmaker or federal officer. However, by itself this principle lacks a mechanism for determining what counts or for enforcing it.

But the article of impeachment that House Democrats unveiled on Monday cites that provision as context. Accusing Mr. Trump of “incitement of insurrection,” lawmakers sought not only his removal from office but also his disqualification from holding any future federal office.

It appears unlikely that there will be any Senate trial or vote before Mr. Trump’s term ends. Still, the prospect of barring him from future office would keep a post-presidency impeachment trial from being moot; in 1876, the Senate tried and convicted a former secretary of war, William Belknap, who had resigned just before the House impeached him.

Separately, the penalty for violating Section 2383 of Title 18 of the United States code, which makes it a felony to incite an insurrection, is not only prison time but making the convict “incapable of holding any office under the United States.”

Notably, this law separately covers the act of giving aid or comfort to people who have engaged in insurrection. In a video he posted on Twitter amid the violence, Mr. Trump offered the rioters reassurance rather than condemnation. He repeated his false claims about a stolen election that they invoked as their justification. While saying “we need peace” and urging them to go home, he added: “We love you; you’re very special.”

What about other speakers?

Before Mr. Trump spoke at the “Stop the Steal” rally, other speakers warmed up the crowd by angrily repeating false claims that the election had been stolen, making assertions that have come under scrutiny in light of the subsequent violence.

Representative Mo Brooks, Republican of Alabama, shouted, “Today is the day American patriots start taking down names and kicking ass!” Donald Trump Jr. warned Republican lawmakers who did not back his father’s effort to overturn the election: “We’re coming for you.” And Mr. Trump’s personal lawyer Rudolph W. Giuliani declared, “Let’s have trial by combat” — a practice from the Middle Ages of settling disputes by fighting.

The New York State Bar Association said on Monday that it was opening an inquiry about whether to remove Mr. Giuliani from its membership, citing a bylaw against membership by people who advocate using force or other illegal means to try to overthrow the government.

11/01/2021 Politics Comments Off on Does Trump Face Legal Jeopardy for His Incendiary Speech Before the Riot?
World News