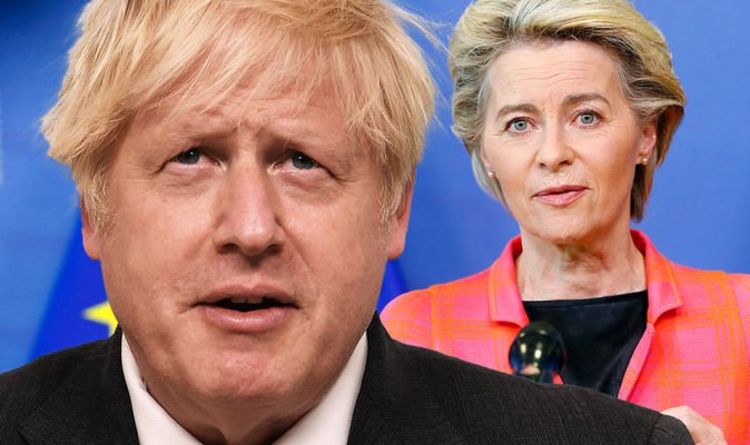 Brexit: Barnier says things will be 'more difficult' for UK

The European Commission has tabled the amount as what it believes Britain owes as part of its Withdrawal Agreement from the EU. But the Treasury has hit back, insisting eurocrats have over-inflated their estimates by up to £5.8billion. UK officials are adamant that the Brexit bill remains within their central range of £35bn-£39bn, with them set to publish an updated estimate next week.

The EU’s figures first emerged in the bloc’s annual accounts for 2020, and reported by Express.co.uk last week.

As part of this, Britain is set to hand over £5.8billion to Brussels in its first full year outside the EU.

The final bill would have been higher, almost £43billion, if it wasn’t for Brussels owing the UK some £1.5billion for its share of fines imposed by the bloc before the end of the Brexit transition period.

The Brexit divorce bill was agreed as part of the UK’s split from the EU, covering the country’s financial commitments made while it was still a member and during the transition out of the bloc, which finished at the end of December.

It was one of the preconditions then Prime Minister Theresa May was forced to sign up to after the 2016 vote to leave the EU.

The final figure set to be handed over by Britain has always infuriated Conservative eurosceptics.

The sum, due to be paid up to around 2064, covers projects signed up to by Britain as well as pension contributions for our former MEPs and eurocrats.

A Home of Commons library paper on the divorce bill said there was “no definitive cost to the settlement”.

But the Office for Budget Responsibility said the net cost to the UK could be as high as £34billion.

The Commons paper, produced in December 2020, shows UK payments to Brussels falling from around £9billion a year in 2020 to £1billion in 2025.

Under the divorce deal, the UK agreed to pay into the EU budget as if it were a member state until the end of the transition period on January 1, 2021.

The EU plans to provide a twice-yearly report to the UK on the actual amounts due, with payments set to follow on a monthly basis.

The Government has claimed these figures are an accounting estimate rather than an accurate figure that would be paid.

A spokesman said: “This is just an accounting estimate, and does not reflect the exact amount the UK is expected to pay to the EU this year.

Brexit: Jones urges UK to do 'whatever necessary' to fix 'problem'

“We will publish detail on payments to and from the EU made under the financial settlement in the EU Finances Statement later this year.”

In our final year of EU membership, British taxpayers sent over £14.4billion to the bloc – with the bill slashed by £4.5billion due to the rebate won by former PM Margaret Thatcher in 1984.

A similar amount was handed over last year while we stayed in the EU’s single market and customs union during the post-Brexit transition period.

09/07/2021 Politics Comments Off on Did you use a calculator? UK anger at EU’s new £40bn Brexit bill – OWN figure put forward
Markets