Florida schoolchildren are required to undergo more than a dozen vaccinations over their years in the classroom and must obey dress codes detailing such things as the width of the straps on their tank tops ― but will not, if Gov. Ron DeSantis gets his way, ever have to get a COVID-19 shot or wear a mask.

“Let the parents make the decision that’s best for their kids,” DeSantis said Wednesday at an event promoting the use of monoclonal antibodies for treating coronavirus patients.

Florida parents, however, are already mandated by state law to vaccinate their children against diphtheria, tetanus, acellular pertussis, polio, measles, mumps, rubella, chicken pox and hepatitis B ― totaling at least 16 different shots ― before they can enroll them in either public or private schools.

Preschoolers, both public and private, are also required to have shots for haemophilus influenzae type b and pneumococcal conjugate.

Further, local school districts can and do impose rules regarding what children can and cannot wear. Girls, for example, are typically forbidden from wearing skirts shorter than a certain length or spaghetti-strap tops.

Mac Stipanovich, a longtime Republican consultant who served as Gov. Bob Martinez’s chief of staff and ran Jeb Bush’s first campaign for governor in 1994, said the state’s intrusion into parental rights is even more foundational: “We don’t even trust parents to send their kids to school,” he said. “We have a law that makes them send them to school.” 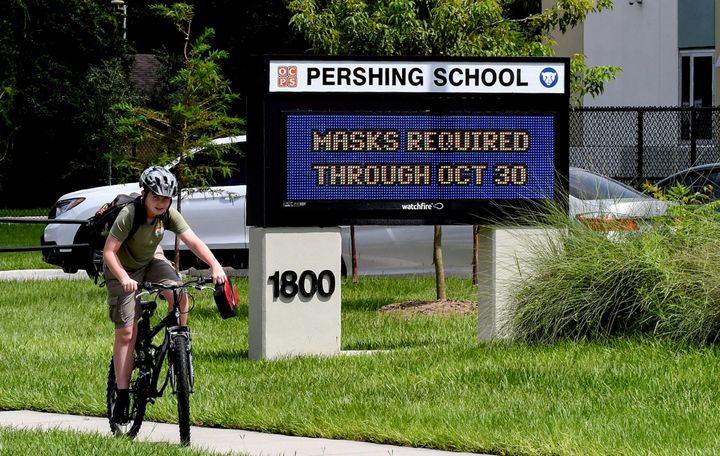 Other Florida laws require parents to use car seats for young children when driving and install fences around home swimming pools to keep children from drowning ― again imposing the state’s wisdom in decisions on how parents can raise their children.

DeSantis spokeswoman Christina Pushaw said none of those comparisons is valid. “You are attempting to compare apples to oranges,” she said.

She said children are at very low risk for catching a serious case of COVID-19, so that the risk of side effects from the vaccine ― only Pfizer is approved thus far for children as young as 12 ― outweigh the benefits from taking it.

She also claimed that the current surge in serious COVID-19 cases, almost exclusively among the unvaccinated, shows that vaccines are not accomplishing the generally accepted theory of “herd immunity.”

“There is no government intervention proven to stop the spread of respiratory viruses,” she said ― even though most medical experts have said that requiring face masks, for example, does exactly that. “The collectivist argument that ‘my vaccine protects you,’ if ‘you’ are unvaccinated, is not factual. It is irresponsible to claim otherwise.”

In fact, many of her, and DeSantis’, assertions are untrue and have been disputed by medical experts, including Dr. Anthony Fauci, the director of the National Institute of Allergy and Infectious Diseases.

When the vaccines first became available, DeSantis pushed hard to get the state’s significant elderly population vaccinated. While the efforts disproportionately focused on white, wealthier neighborhoods, his work was instrumental in getting a large percentage of the state’s 65-and-older residents inoculated by the first few months of 2021.

That interest, though, had already appeared to have waned by the time he opened the Conservative Political Action Conference in late February in Orlando. There, he concentrated on the “freedom” from lockdowns and mandates Florida offered, and how he had kept the state’s economy “open” through much of 2020.

“We are in an oasis of freedom in a nation that’s suffering from the yoke of oppressive lockdowns,” he said.

Since then, he has aggressively opposed mask mandates in schools, even threatening to fine school administrators who imposed them over his objections. A lawsuit has, at least temporarily, blocked his executive order, and President Joe Biden ― in a Thursday White House speech that appeared to single out DeSantis without mentioning him by name ― promised that the federal government would reimburse any educator so punished by a governor. 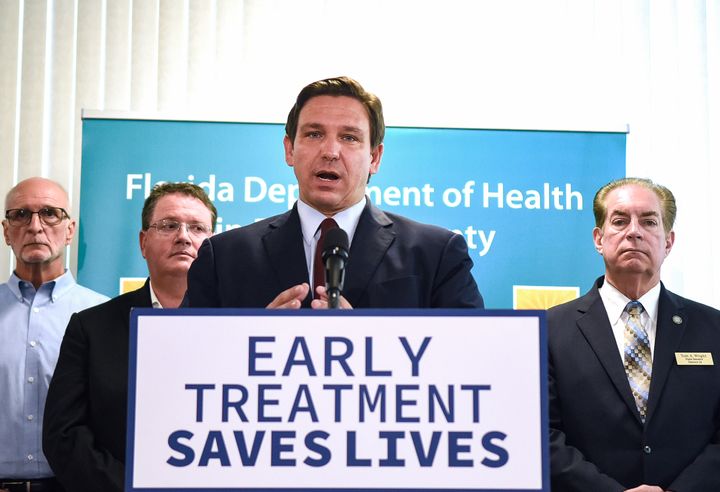 DeSantis’ critics, both Republicans and Democrats, say the reason for this approach is simple: a desire to pander to the large segment of former President Donald Trump’s supporters who continue to believe his claims that the disease is not that serious and who reject the vaccines.

“It’s all performative politics. It’s gaslighting on a grand scale,” Stipanovich said. “It’s all about politics and appealing to the MAGA base.”

Both Democrats running for the opportunity to face DeSantis next autumn said he has abdicated leadership and is instead catering to likely voters in a 2024 GOP presidential primary.

“It’s so strange and so hard to comprehend that an intelligent human being cannot understand why getting a vaccine and wearing a mask is not a good idea during a pandemic,” said Charlie Crist, once a Republican governor of Florida and now a Democratic congressman from St. Petersburg.

Nikki Fried, the state’s agriculture commissioner who in 2018 became the first Democrat to win a statewide Cabinet office in a dozen years, said DeSantis is completely missing the public health aspect of vaccines and masks.

“There are certain things that you have to do to be part of society. You have laws on the books. You can’t drive down the road at whatever speed you want. You can’t drink and drive. You have to wear seat belts. You have to put your child in a car seat,” she said, adding that DeSantis made an active choice to stop pushing the vaccine after the elderly and his political donors had gotten their shots.

“He just moved on. He felt that he could show there was a win in Florida, and stopped talking about it,” she said. “He’s almost annoyed that he has to talk about COVID again.”

Pushaw denied that DeSantis has ended his vaccine advocacy. “At every one of his 20-plus press conferences on monoclonal antibodies in the past month, Governor DeSantis has reminded Floridians that vaccination has proven to be effective in preventing serious illness,” she said.

Stipanovich, though, said DeSantis effectively undermines that message by suggesting the vaccine is not reliable ― much the way Trump undermines his recommendation for people to get vaccinated by immediately pointing out that they have the “freedom” not to.

“The following sentence is always something that undercuts the message,” Stipanovich said of DeSantis. “He says get a vaccine, but says it won’t stop you from getting sick, and then you should get monoclonal antibodies.”