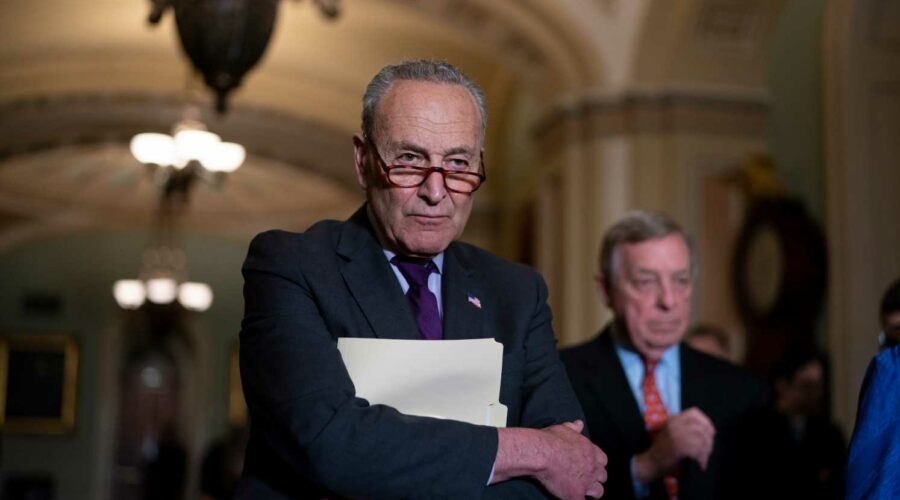 WASHINGTON – The White House and congressional Democrats are preparing to go it alone on a massive infrastructure package, saying they’ll know by next week whether Republicans will join them or whether they’ll fly solo on a bill modernizing the nation’s transportation systems and addressing the threat of climate change.

Senate Republicans are “either going to choose to work together with us to get things done, to supercharge our economy or they will choose the way of (GOP Leader) Mitch McConnell, which has consistently been obstruction today, obstruction tomorrow, obstruction forever,” House Democratic Caucus Chairman Hakeem Jeffries, D-N.Y. told reporters Tuesday. “And if they choose the obstruction pathway, then we are prepared to do what is necessary to  get the American Jobs Plan over the finish line.”

Jeffries spoke following a meeting with House Democrats and White House officials, including counselor for the president Steve Ricchetti, to discuss the path ahead on infrastructure amid what they see is a dwindling timeframe for action.

Ricchetti relayed that the White House plans to “take stock” in seven to 10 days of where infrastructure talks stand with the bipartisan group of senators, according to a White House official. Democratic leaders said they expect the infrastructure bills would reach both the House and Senate floors over the next few weeks in time for final approval before Congress recesses in August.

Democrats are pursuing a “two-track” strategy to enact Biden’s American Jobs Plan that would pour tax dollars not only into highways, bridges and airports but also broadband, electric vehicle charging stations and new housing while also accelerating the nation’s conversion from fossil fuels to clean energy.

On one hand, Democrats said they would negotiate with Republicans on a bill that focuses on traditional transportation. If a deal can’t be reached, Democrats would fold those programs into a larger climate bill using “budget reconciliation,” a parliamentary strategy that bypasses the filibuster process and allows a simple majority to pass legislation.

The American Jobs Plan had an initial price tag of $2.25 trillion. Biden has come down from that number to $1.4 trillion while a bipartisan group of 10 senators unveiled a $1.2 trillion package last week that focuses on traditional infrastructure such as roads, bridges and waterways.

The White House has said little about the proposal other than press secretary Jen Psaki saying Sunday that “we’re still taking a look.”

Even if there’s agreement on the transportation elements of infrastructure, Democrats are proceeding on a second track that would cover elements not only of Biden’s American Jobs Plan but also bring in pillars of his $1.8 trillion American Families Plan that includes “human infrastructure” such as free community college tuition, universal pre-school, and child care.

Biden and Republicans remain at odds on infrastructure. 4 charts break down how far apart they are

Senate Majority Leader Chuck Schumer, D-N.Y,. told reporters Tuesday, he would meet Wednesday with Democrats on the Senate Budget Committee to map out a budget resolution spelling out a reconciliation pathway.

Both are moving forward: the bipartisan track and the track on reconciliation,” Schumer told reporters Tuesday. “And both we hope to get done in the month of July.”

Progressives say they’re willing to support transportation-only bill on the condition that climate legislation is advanced as well.

“Were saying that there absolutely has to be a guaranteed deal that climate is built into these infrastructure bills and that it matches the problem that has to be solved,” said Sen. Ed Markey, D-Mass., a co-sponsor of the Green New Deal. “We can’t have dessert before the main course.”

Republicans have resisted a bill that goes beyond traditional transportation programs, calling Biden’s infrastructure proposal nothing more than “a liberal wish list” that would bankrupt the country.

McConnell told reporters Tuesday that he won’t support any bill that tries to repeal parts of the 2017 tax cuts (which Biden has proposed) or is not paid for fully.

“I would love to see us get an outcome on infrastructure. It’s important. The country needs it,” he said. And “we have a history of doing infrastructure on a bipartisan basis.”