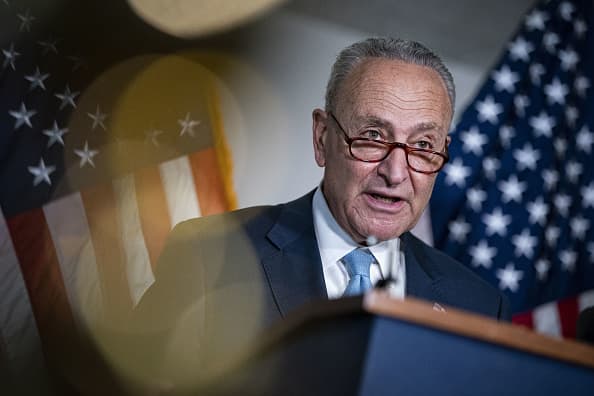 These days, it can feel like there are very few issues Democrats and Republicans agree on. That is, of course, unless someone's proposing a bill aimed at challenging Beijing's growing global influence.

The United States Innovation and Competition Act of 2021, a wide-ranging piece of legislation expected to cost about $200 billion, seeks to do just that.

Assembled by Senate Majority Leader Chuck Schumer, D-N.Y., the bill has united senators on both sides of the political aisle behind a bundle of provisions to boost American research and technology manufacturing deemed critical to U.S. economic and national security interests.

The scope of the bill, the end result of input from at least six Senate committees, reflects the many fronts in the U.S.-China rivalry, as well as the urgency of a global semiconductor shortage that has clobbered automakers, home appliance manufacturers and phone producers.

The proposal, subject to final changes, would:

The largest part of the 1,400-page plan is a proposal previously known as the "Endless Frontier Act."

Now an amendment, that provision from Schumer and Sen. Todd Young, R-Ind., would give new life to the National Science Foundation, appropriate $81 billion for the NSF between fiscal 2022 and 2026, and establish a Directorate for Technology and Innovation.

The directorate would ensure NSF funding is funneled to the development of critical technologies, including artificial intelligence, high-performance computing, robotics and semiconductors.

"This legislation will set our country on the path to out-innovate, out-produce and out-compete the world in the industries of the future," Schumer said from the Senate floor Monday.

"So far, this bill has flown a bit under the radar. But it is an incredibly important piece of legislation," he added. "At its core, the U.S. Innovation and Competition Act is about maintaining America's role as the global economic leader. Few issues could be more important."

Some senators believe Schumer's timeline is ambitious given a raft of Republican requests for changes and haggling over some existing provisions, though the bill is widely expected to clear the chamber at some point in the coming weeks.

Sen. Rand Paul, R-Ky., for example, has expressed support for an amendment to bar any American funds going to research in China that involves increasing the deadliness of viruses, an implicit acknowledgment of theories that Covid-19 escaped from a lab in the Wuhan province.

Despite the last-minute gripes, Schumer remained optimistic as of Monday that the upper chamber will be able to pass the measure by the end of the week. The Senate is scheduled for a recess next week, so if they can't finish by Friday work on the legislation will be paused until the week of June 7.

Its seemingly inevitable journey to the House is yet another reminder of the near-universal goal between the Biden administration and lawmakers to keep the U.S. competitive in its economic and geopolitical feud with China.

Earlier this year, the White House embarked on a government-wide review of key supply chains, directing much of the executive branch to assess how reliant the U.S. is on a crucial group of Chinese exports.

Many technologies deemed critical to the future of U.S. enterprise — electric vehicles, smart cities, faster computers and cutting-edge weaponry — are made possible in large part thanks to shipments of rare earths mined in China.

Apple, for example, uses rare earths in its speakers and cameras and to make its phones vibrate.

China supplied 80% of the rare earths imported by the United States between 2016 and 2019, according to the U.S. Geological Survey.

Should economic competition accelerate, or geopolitical tensions worsen in the South China Sea, national security advisors say it's essential for the U.S. to be able to continue to produce these technologies absent trade with China.

China has for years attempted to assert its sovereignty over the South China Sea and the Paracel Islands, where Beijing has built missile bases, radar facilities and an airfield. The U.S., seeking to challenge China's encroachment, frequently sends Navy ships through the region to show off its firepower.

While China does not hold a technological advantage in the manufacturing of semiconductors, its geographic proximity to those that do is also a potential problem.

Foundries that use the most advanced manufacturing processes, known as the 5-nanometer node, are operated exclusively by Samsung in South Korea and by Taiwan Semiconductor Manufacturing Company in Taiwan.

That's likely a leading reason why the Senate bill also includes $52 billion in incentives for semiconductor companies to build new factories in the U.S., a priority backed by Sens. Mark Warner, D-Va., and Cornyn.

The bill would create a grant fund managed by the Commerce Department that would, to an unspecified extent, match financial incentives offered by states and local governments to chipmakers who improve upon or build new factories.

"If a state were to provide some sort of benefit to a company to build a foundry there, the federal government would then match that," said Clete Willems, a partner at law firm Akin Gump whose clients include members of the chip industry.

Willems, a former trade official in the Trump and Obama administrations, said that chipmaker Intel does have extensive chip manufacturing capabilities in the U.S. but that it tends to produce for its own established supply chains.

Modern chip factories can cost tens of billions of dollars to construct and need to be furnished with machines able to imprint circuits just several atoms wide. Though the final amount the federal government will make available for such semiconductors grants is still being finalized, Willems said it could be around $10 billion.

While Schumer may have an easier job mustering support for the plan thanks to the inclusion of so many senators, the legislation could face a slightly tougher time in the House.

That's because, while some sections do a better job of pivoting their distaste for the Chinese government into pro-American objectives, other senators took a more aggressive tone.

The Strategic Competition Act, for example, authorizes $1.5 billion over five years for the "Countering Chinese Influence Fund to counter the malign influence of the Chinese Communist Party globally."

Authors Sens. Robert Menendez, D-N.J., and Jim Risch, R-Idaho, of the Foreign Relations committee have been clear that their target is disinformation spread by the Chinese government and material efforts to undermine the U.S. and its allies.

But some progressive Democrats, such as Rep. Ilhan Omar of Minnesota, could object to what they see as a growing trend among U.S. lawmakers to blame China for the country's ills.

"We need to distinguish between justified criticisms of the Chinese government's human rights record & a Cold War mentality that uses China as a scapegoat for our own domestic problems and demonizes Chinese Americans," Omar tweeted on Wednesday. "Racism has no place in policy debates."

Representatives for Menendez and Risch did not respond to CNBC's requests for comment.

The Strategic Competition section also calls for a boycott of the 2022 Beijing Olympics by U.S. officials, not athletes, and demands an end to the Chinese Communist Party's "ongoing human rights abuses, including the Uyghur genocide."

House Speaker Nancy Pelosi, D-Calif., expressed support for a diplomatic boycott last week, saying "we cannot proceed as if nothing is wrong about the Olympics going to China."

Notwithstanding the possibility of objections from a handful of House lawmakers, Willems said large portions of the Senate bill are expected to receive broad, bipartisan support in both chambers.

And that, in contrast to heated and polarizing discussions about infrastructure spending, could represent one of 2021's final glimpses at teamwork on Capitol Hill.

"I think you can still get a coalition for this because it does play with most members," he said Monday morning. "It's all about boosting American competitiveness, vis-a-vis China, but also vis-a-vis the rest of the world."

"Appropriately contextualized, some of these items are still going to be incredibly popular," he added.