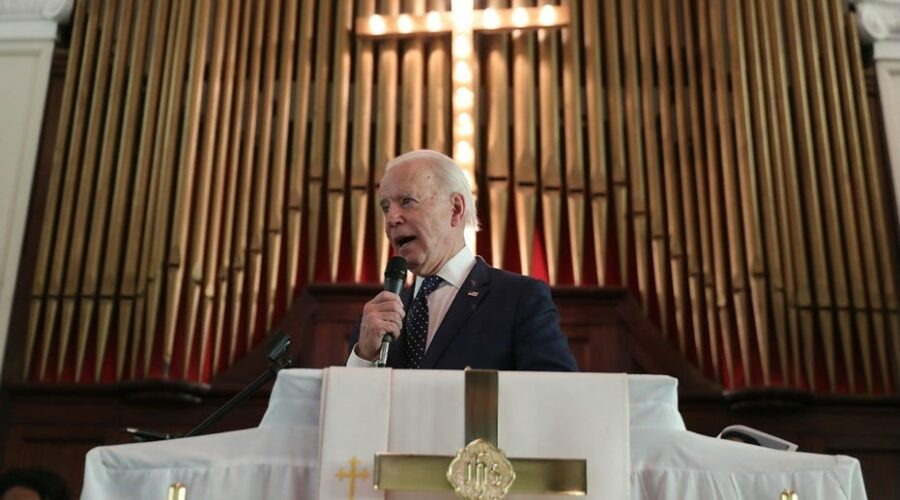 Rep. Ted Lieu went on a rant this weekend against the Catholic Church calling U.S. bishops “hypocrites” and “nakedly partisan” for seeking to update Communion guidance that could rebuke politicians like President Biden and Speaker Nancy Pelosi for supporting abortion policies.

The Catholic California Democrat called out several Republicans, including former House Speaker Newt Gingrich and former Attorney General William Barr, for seemingly violating the beliefs of the Catholic Church, but not being threatened with Communion denial like pro-choice Democrats. Lieu said such hypocrisy could doom church membership.

Lieu then dared the church to deny him Communion for his political beliefs of supporting access to abortion, the right for couples to divorce, same-sex marriage and treatments for infertility.

“Next time I go to Church, I dare you to deny me Communion,” Lieu tweeted.

The Catholic Church is pro-life, meaning it opposes abortion as well as the death penalty. The church has a history of opposing birth control and in vitro fertilization (IVF) treatment for infertile couples. Divorcees also can’t remarry in the church without an annulment of their first marriage.

Lieu questioned why the Catholic Church isn’t targeting Republicans who back the death penalty or those who broke their marriage vows.

“[Y]ou are hypocrites,” Lieu tweeted at the bishops. “You did not tell Bill Barr, a Catholic, not to take communion when he expanded killing human beings with the death penalty. You are being nakedly partisan and you should be ashamed. Another reason you are losing membership.”

The Twitter rant is a result of the U.S. Conference of Catholic Bishops (USCCB) voting overwhelmingly this week to draft a formal document on the meaning of the Eucharist after a contentious debate on whether Biden and other politicians who support abortion policies are worthy of receiving Communion at Mass.

The language of the new Communion document is not finalized, but it’s expected to admonish Catholic politicians and other public figures who disobey church teaching on abortion and other core beliefs. At least two-thirds of the bishops would have to vote to adopt the new language at their next gathering slated for November.

The decision on whether Biden, or any other politician, should be allowed to receive Communion would still be left up to individual bishops, as is standard for all churchgoers, but a new document could inform those decisions.

Asked about the Catholic bishops’ move on Friday and whether he would be denied Communion, Biden said: “That’s a private matter and I don’t think that’s going to happen.”

Lieu, a military veteran and impeachment manager in one of former President Trump’s Senate trials, questioned how the bishops’ actions would trickle down to other churchgoers, including those who have gotten an abortion, who are divorced and who are gay.

“You should be deeply ashamed for politically weaponizing the sacred sacrament of Communion,” Lieu tweeted at the USCCB.