WASHINGTON (Reuters) – At the heart of President Donald Trump’s law-and-order election campaign is Chad Wolf, who as acting secretary of homeland security has defied critics by championing Trump’s message in stark terms, sending U.S. federal forces into some cities and expanding the boundaries of his Cabinet post. 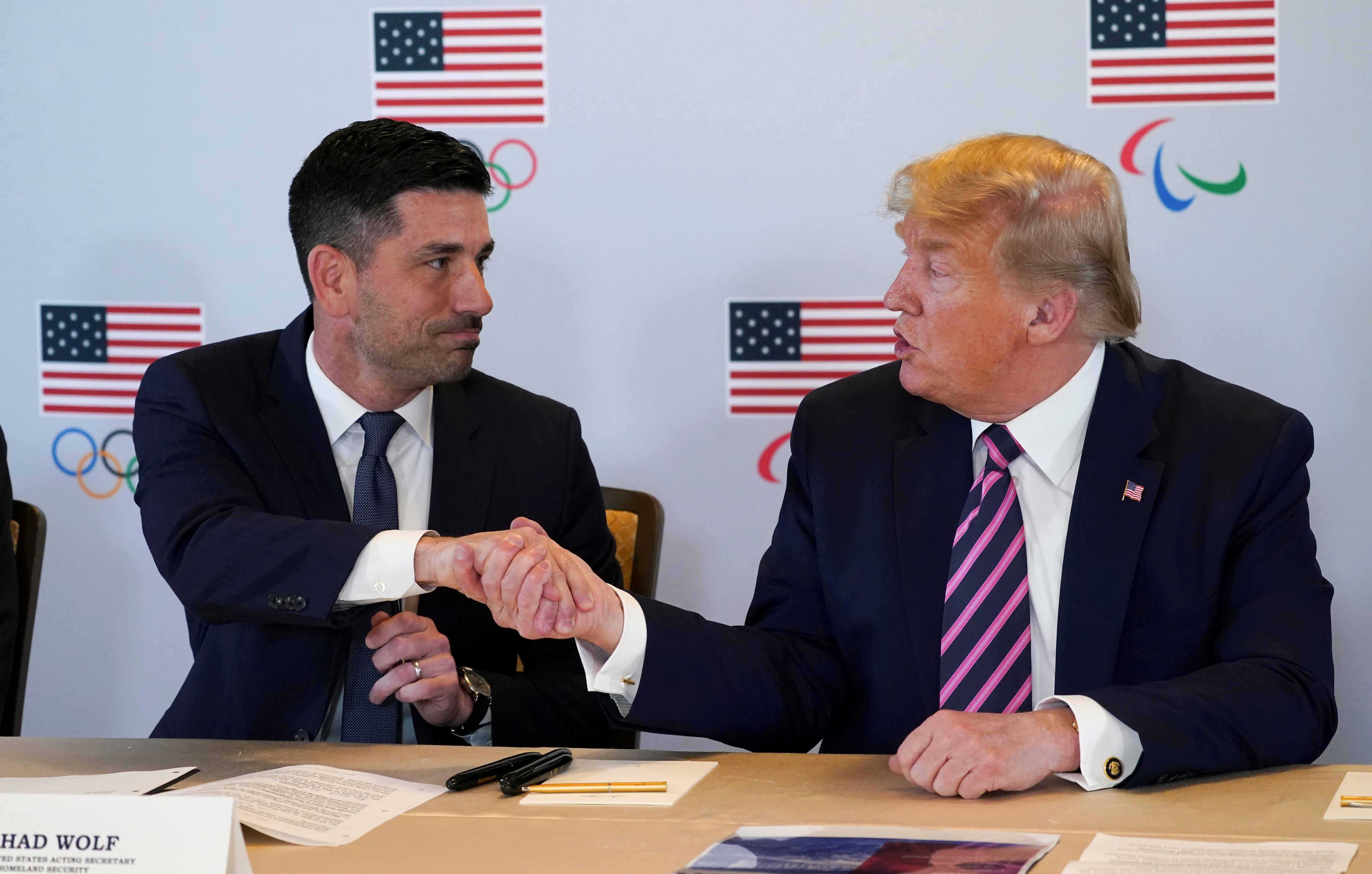 Little known outside Washington until now, Wolf has become one of Trump’s most visible aides. Echoing the Republican president, he paints a dark picture of Portland, Oregon, a city controlled by rival Democrats, as overrun by looters during summer protests against racism and police brutality.

In dozens of appearances on the conservative Fox News Channel, Wolf, 44, has defended Trump, called for police forces to rein in “violent anarchists” and dismissed Democratic presidential nominee Joe Biden as “delusional” for saying Trump’s re-election in November would foster more violence.

Wolf caused an uproar with his deployment of federal agents to quell unrest in Portland because of their unmarked uniforms and use of unmarked cars to pull protesters off the streets.

In Wolf’s defense Alexei Woltornist, a spokesman for the Department of Homeland Security (DHS), wrote in a statement to Reuters that DHS law enforcement officers were under attack and local leadership in Oregon had refused to step in.

“(Acting Secretary) Wolf would have been derelict in his duties to not speak out and take action,” he wrote.

Wolf’s emergence as Trump’s law-and-order messenger surprised some current and former DHS colleagues who said they viewed Wolf as a non-ideological moderate before Trump named him acting secretary in November 2019, the fifth person to head the department during Trump’s tumultuous tenure.

Trump’s previous homeland security chiefs implemented his agenda, especially on immigration, but they did not always embrace his heated language or promote it as regularly in conservative media. Trump last week said he would seek to install Wolf permanently in the role.

But Democrats accuse Wolf of politicizing a department which oversees election security and which could play a pivotal role in the Nov. 3 election when Trump, trailing Biden in opinion polls, hopes to secure a second four-year term.

Protests have swept the United States since late May when George Floyd, a 46-year-old Black man, died after a Minneapolis police officer knelt on his neck for nearly nine minutes. Sporadic violence and looting accompanied some of the protests.

Buoyed by Wolf’s actions, Trump has sought to portray himself as tough on crime and the only person who can halt a descent into anarchy. Wolf has deployed agents from his department to Portland, Seattle and Washington, D.C., where some local Democratic leaders have said they are not welcome.

Despite Trump’s focus on violence, only 8% of Americans view crime as a major problem confronting the country and 53% remain sympathetic to anti-racism protests, according to a Reuters/Ipsos poll released on Wednesday.

Wolf previously served as head of the DHS office of strategy, policy and plans. Before that, he was chief of staff to former secretary Kirstjen Nielsen, who resigned in 2019 amid tensions with Trump over border security.

Having worked as a lobbyist before joining the Trump administration, Wolf never before led a large organization and lacked the stature and experience of some previous DHS secretaries.

“My perception from working with him was that he was a technocrat, he was a subject matter expert,” said David Lapan, a DHS spokesman at the start of the Trump administration who worked closely with Wolf.

“I didn’t see him as an ideologue,” said Lapan, now vice president of communications with the Washington-based Bipartisan Policy Center. “But I certainly see him that way today.”

Wolf did not inject politics into staff meetings during his time running the DHS policy office, according to one current official who requested anonymity to discuss the matter.

“My impression of him had been more part of the ‘adults in the room’ camp, though in a sort of junior way,” the official said. “I’ve been surprised by his whole Portland thing.”

Wolf kept a relatively low public profile during his first few months running the department, even as DHS took a lead role in responding to the spread of the novel coronavirus.

He found his moment as racial justice protests heated up around the country.

Wolf sent DHS personnel to Portland in July as part of a Trump-ordered effort to protect monuments and federal buildings from “violent mobs.”

Last weekend Portland Mayor Ted Wheeler, a Democrat, blamed Trump for violence in the city following the death of a protester affiliated with the far-right group Patriot Prayer.

Wolf then sent a sharply worded letter to Wheeler that accused him of inaction and allowing “senseless violence and destruction night after night.”

Wheeler called that “grandstanding” in a statement to Reuters on Thursday.

A senior DHS official close to Wolf said that his stark language was not ideologically driven.

“It goes back to just doing the job,” the official said. “It’s not like he sought the limelight here, it just so happened that violent rioters and anarchists wanted to attack the cities.”

Democrat Bennie Thompson, chairman of the House of Representatives Homeland Security Committee, has opposed many of Wolf’s actions and urged him to step down.

“Of all the secretaries that I’ve interfaced with – and I’ve been on the committee since its inception – he’s by far the most partisan, least truthful and most resistant to oversight,” Thompson said in an interview.

Thompson said Wolf had ignored a tradition of bipartisanship at the department, transforming it into “the Donald Trump re-election committee.”

In an email, Biden campaign spokesman Mike Gwin accused Trump and Wolf of inflaming tensions and trying to turn federal law enforcement into a tool for Trump’s political gain.

Mick McKeown, a Washington-based consultant and former Trump DHS official, praised Wolf’s performance as acting secretary, saying he had learned to work with Trump, unlike his predecessors.

“He had a first-row seat to everyone else’s failures and he was able to learn from that.”