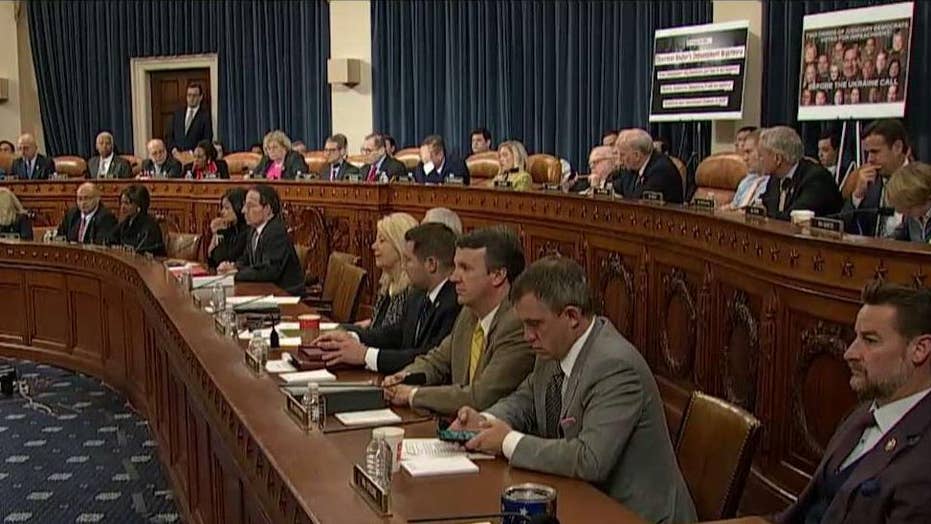 Vote sets the stage for a nasty and partisan battle over impeachment on the House floor; chief congressional correspondent Mike Emanuel reports from Washington.

Earlier this week, House Speaker Nancy Pelosi, D-Calif.., admitted that her deranged impeachment scheme has been going on for two-and-a-half years.

Not only does this make Pelosi a liar – she denied being in favor of impeachment until September – it shows why the Democrats can’t stop the impeachment train now even though it’s headed straight for a derailment.

National Democrats and their allies in the Trump-hating media have invested years and untold sums of money on their partisan attempted coup d’état. To turn back now would amount to an acknowledgment of how wrong they’ve been, time after time after time.

First Democrats came up with the lie that the Trump campaign colluded with Russia to win the 2016 election. Democrats were wrong.

Then Democrats invented the claim of a big conspiracy by Trump, not collusion. Wrong again.

Then Democrats cried obstruction of justice. Wrong yet again.

Then desperate Democrats latched onto Ukraine and the supposed quid pro quo – until President Trump released the transcript of his July 25 telephone call with Ukrainian President Volodymyr Zelensky, showing no such deal.

Then Democrats took a poll, and said never mind that; it’s actually bribery. Unfortunately for the Democrats, the facts don’t support bribery either. U.S. foreign aid flowed to Ukraine and Ukraine did not conduct an investigation of former Vice President Joe Biden or his son Hunter.

Now Democrats are left with the amorphous and flimsy charges of abuse of power and obstruction of Congress against President Trump.

It’s hard to comprehend just how lost leaders of a political party must be to put everything on the line – including the next presidential election and their majority in the U.S. House – for two unserious articles of impeachment that the American people aren’t on board with.

This is called political suicide.

Two highly respected national polls out this week found that a majority of the American people do not want President Trump to be impeached and removed from office.

And in the key battleground state of Wisconsin, this week a Marquette University poll found only 40 percent in favor of impeachment and 52 percent against it.

Pelosi would be wise not to overlook this data. In this divided day and age, any time a measure garners the support of 50 percent or more of those polled it’s significant.

Consider for a moment if the numbers in these polls were flipped. The Democrats would be screaming from the mountaintops that they had the will of the people behind them.

However, the impeachment-crazed Democrats appear to be following in the footsteps of Republicans in 1998 when the GOP made the colossal mistake of ignoring public opinion regarding whether to impeach President Bill Clinton.

As the full House takes up the impeachment question next week, all eyes will be on the 31 Democrats who represent districts that President Trump carried in the 2016 election.

These endangered Democrats will decide whether there is a divisive and all-consuming impeachment trial in the U.S. Senate next year, just 10 months before the 2020 presidential election.

There are currently 431 members of the House of Representatives, due to four vacancies. Those 431 representatives are split between 233 Democrats, 197 Republicans and one independent member – Justin Amash of Michigan.

If Amash votes in favor of impeachment, Pelosi can only afford to lose 18 members of her caucus in order to pass the two articles of impeachment.

If Democrats Collin Peterson of Minnesota and Jeff Van Drew of New Jersey vote against passage of the articles of impeachment – just as they voted against beginning the sham inquiry – Pelosi’s margin for error gets that much smaller.

A vote in favor of the hollow articles of impeachment by any of these swing-seat Democrats will put their reelection prospects in jeopardy and therefore put the Democratic majority in the House in serious danger.

Freshmen Democrats in particular hailing from districts Trump won are playing with fire by voting yes on impeachment.

The odds of these Democrats losing their seats and the Democratic House majority along with it will increase exponentially with an irresponsible vote in favor of impeachment: Lucy McBath of Georgia; Abby Finkenauer and Cindy Axne of Iowa; Jared Golden of Maine: Elissa Slotkin and Haley Stevens of Michigan; Angie Craig of Minnesota; Chris Pappas of New Hampshire; Xochitl Torres Small of New Mexico; Susie Lee of Nevada; Anthony Brindisi and Max Rose of New York; Kendra Horn of Oklahoma; Conor Lamb of Pennsylvania; Joe Cunningham of South Carolina; and Ben McAdams of Utah.

These rookie legislators are sure to get an earful at upcoming town hall meetings in their districts. Time will tell if they will listen to their constituents.

If the impeachment process moves to the Senate, public support will only weaken. It will take little effort by Republican senators to expose House Democrats and their political charade.

Once due process is allowed and witnesses who can tell the whole story are permitted to testify, the American people will be outraged by the reprehensible behavior of the radical House Democratic inquisitors.

Because the facts are on his side, President Trump will be acquitted in the Senate in short order.

This smear campaign against President Trump has all the characteristics of an impeachment inquiry that is doomed to fail. The American people are turning against the witch hunt more and more with each passing day – and for good reasons. It’s rushed; it’s partisan; it’s incomplete; it’s unfair; and most significantly, it’s completely devoid of facts and evidence.

Pelosi’s decision to put an already divided America through this ordeal for selfish political purposes will live in infamy. It will also pave the way for a new Republican majority in the House, along with the overwhelming reelection of President Trump.