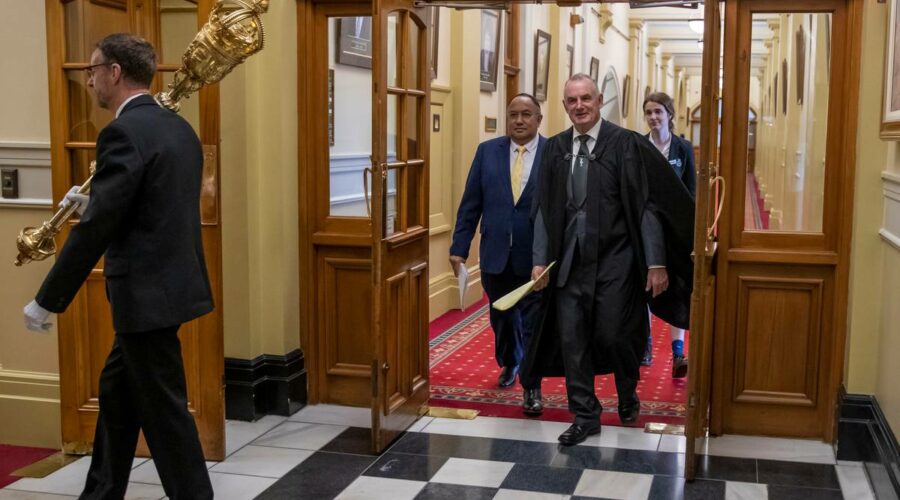 Parliament will return to sit next week in socially distanced form, according to the Act Party.

But that was news to speaker Trevor Mallard who, along with many MPs this morning, found out about Act’s plans via press release.

Act leader David Seymour said he “welcomed the parliamentary business committee decision that a socially distanced Parliament will go ahead next week”.

“Any Act MPs who attend next week will already be in Wellington, be double vaccinated, masked, and taking all precautions,” he said.

But Mallard said Parliament’s business committee had not actually decided anything when it met last night. It had simply not decided to delay Parliament or progress with another plan.

Because the business committee had made no decision, Parliament is technically scheduled to resume as normal next Tuesday.

But Act’s gambit puts the ball in the court of Prime Minister Jacinda Ardern, who can use her powers under parliamentary standing orders to ask Mallard for another delay to the sitting of the House.

The Government’s preferred option is for a digital Parliament to return. This would allow scrutiny via Question Time. The Government could also pass legislation.

Ardern needs to pass a budget by the end of September and she can only delay Parliament for three more weeks without all the other parties agreeing.

Mallard said that the business committee had not “decided” anything.

“There has certainly been no decision from the business committee that a socially distanced Parliament will go ahead next week,” Mallard said.

He said a proposal for a virtual Parliament was rejected by the committee at a meeting on Friday night.

“That was rejected by the National Party and by Act and therefore we revert to the status quo that Parliament will sit,” Mallard said.

Ardern can request a further delay to MPs returning up until Parliament is scheduled to return on Tuesday at 2pm.

She must first get advice from director general of health Ashley Bloomfield that the House was unable to sit.

National’s shadow leader of the House Michael Woodhouse said National would like to see a return of the socially distanced Parliament seen last year under alert level 3.

Wellington will move to alert level 3 on Tuesday at midnight.

“A very small number of senior staff would permanently relocate to Wellington for the duration of level 4 and 3,” Woodhouse said.

This last week, parliamentary select committees ran instead of the normal sitting ofParliament.

Act and National are also keen for the return of the Epidemic Response Committee, which can only be established once Parliament returns.

“We believe it’s critical at times like this that Government scrutiny is enhanced, and we will be calling for Parliament to resume the Epidemic Response Committee when it sits on Tuesday,” Seymour said.

Seymour has been in Wellington for the last two weeks, meaning he would not have to travel to attend Parliament.