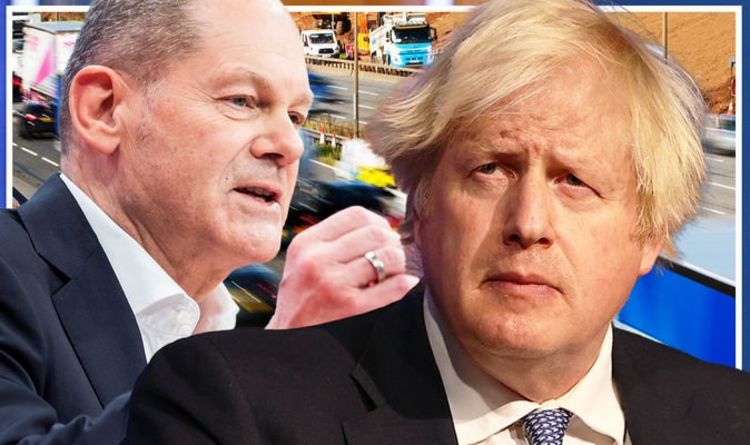 Nearly a year after the UK left the EU, a study from the Prognos Institute found Bavarian exports to Britain fell sharply after Brexit. It comes after a German bank hailed the UK’s economy after its withdrawal from the EU.

Economists from the Prognos Institute shared that in the first three quarters, Bavarian exports to Britain fell by three percent.

Overall exports increased by a total of fifteen percent, but imports from Britain fell even more sharply.

The Prognos Institute then warned trade with the UK could become even more difficult despite the agreement signed by Britain and the EU due to expected differences in technical norms and standards.

Their study said, using cars as an example, the European and British vehicle type approval certificates are no longer mutually recognised.

Economists warned new barriers to trade are therefore also emerging in many other areas, for example due to different product regulations, a lack of mutual recognition of professional degrees and qualifications, and different rules in food law.

Bertram Brossardt, VBW Managing Director, said that while the trade agreement prevented the worst consequences of Brexit, “there can be no talk of trouble-free trading”.

He added: “In the trade in goods, we urgently need regulations for the mutual recognition of product regulations.

“In the service trade it is important to replace the hotchpotch with regulations from a single source. And we need to simplify the barriers to mutual recognition of qualifications.

“The aim must be to return to constructive cooperation as quickly as possible.”

In November, an article published in the corporate blog of German bank IKB Deutsche Industriebank on Wednesday highlighted that despite predictions of post-Brexit chaos, the British economy has not collapsed.

They added that in Britain investments have proven to be robust and neither corporate nor consumer confidence have noticeably deteriorated.

Dr Klaus Bauknecht, chief economist at IKB, noted most of Britain’s current economic woes can be pinned not on Brexit but on the Government’s response to Covid.

Given this, he adds that many of the same problems – for example, a reduction in potential growth – can also be seen in Germany.

Dr Bauknecht wrote that, for the most part, Brexit did not worsen the financial struggles met by the UK Government during the Covid pandemic.

He said: “Brexit did not make the [NHS staff shortage] situation worse, as the number of doctors in Great Britain did not decrease between 2016 and 2020.”

Dr Bauknecht also noted: “The slump in GDP a year and a half ago initially seemed to confirm the pessimists.

“But the British economy is now in relatively good shape again – especially compared to the German economy.

“That is why the Bank of England is already considering the first rate hikes, especially since estimates of potential growth support the thesis that the negative consequences of Brexit could remain manageable.”

It comes as data from the Office for National Statistics (ONS) and Bank of England (BoE) showed the UK’s trading prospects have shrunk on a global level.

The ONS and BoE released data showing the UK’s trading habits over the last 24 years.

British GDP from trade reached its highest since 2006 in 2019 when it hit around 62 percent.

At the same time, the EU maxed out at roughly 75 percent, its highest in recorded history.

Both suffered losses when the pandemic hit in 2020, but only the EU has recovered while the UK has not seen trade recover since leaving the bloc.

A Government spokesperson told Express.co.uk: “It is too early to draw firm conclusions on the long-term impact of our new trading relationship with the EU and the rest of the world due to the impact of the pandemic and its restrictions on trade.

“We have secured over £760billion worth of trade deals with 70 countries plus the EU, and as an independent trading nation, we will go further and faster in 2022 as we launch negotiations with India, Mexico, Canada and the Gulf, as well as securing accession to the £8trillion-plus, CPTPP free trade bloc.

“Our trade strategy is securing valuable financial investment that boosts our world-class exports and brings prosperity to every part of the UK, and we also look forward to seeing our ambitious deals with Australia and New Zealand coming into force next year.”