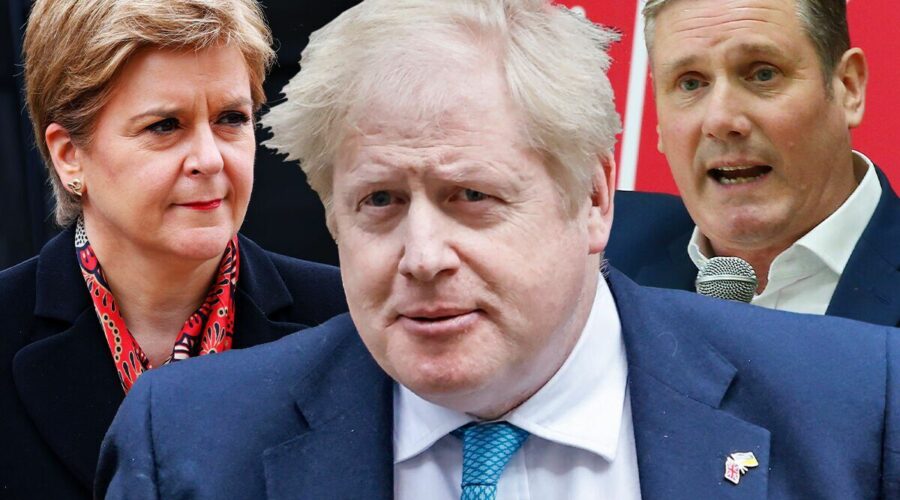 Keir Starmer questioned over his silence on failures of Brexit

Boris Johnson has faced repeated calls from the Labour Party and SNP leaders after being fined for attending a party at Downing Street when strict national lockdown rules were in place. During a tense two-hour session in the House of Commons on Tuesday, the Prime Minister apologised to MPs 35 times over his attendance at the event on June 19, 2020. A raging Sir Keir Starmer once again furiously attacked Mr Johnson over breaking the lockdown rules his Government imposed, demanding he resign.

But Nile Gardiner, a foreign policy expert and former aide to Margaret Thatcher, claimed these calls from opposition parties are a “cynical ploy” to oust the Prime Minister and “ultimately reverse Brexit”.

He tweeted: “Make no mistake. The Labour/SNP/Liberal calls for @BorisJohnson to resign have one goal.

“To turn the clock back, turf out a PM with a huge electoral mandate, and ultimately reverse Brexit.

“The vast majority of Conservative MPs will see through this cynical ploy and reject this.”

When the Partygate investigation began at the start of this year, Mr Gardiner warned Brexit could be destroyed by Sir Keir and Ms Sturgeon in a destructive Labour/SNP plot if Mr Johnson is ousted as Prime Minister.

He argued that, if the Tories are beaten at any early general election, the two opposition parties could form a tight coalition that would “defy the will of the British people and tear Brexit to pieces”.

“The Left hate Boris because of what he achieved with Brexit over anything else.

“They see toppling the Prime Minister as an opportunity to bring down the entire Brexit process.”

Mr Gardiner further warned: “There could be an early general election, and the polls show Labour with a significant lead.

“This is a very cynical exercise to try and remove Boris from power and force an early general election and undo the entire Brexit project.

“If Labour and the SNP formed a tight coalition, they would both defy the will of the British people and tear Brexit to pieces.”

Following the Brexit referendum in June 2016, both Labour and the SNP frequently voiced their strong opposition towards the UK leaving the EU.

Sir Keir campaigned for a second referendum on Britain’s membership of the bloc under the Labour Party leadership of Jeremy Corbyn.

Under the Labour leadership of Mr Corbyn, the then-Shadow Brexit Secretary was at the forefront of a campaign for his party to support Remain in any second EU referendum.

He had said: “In the aftermath of the local elections and particularly the EU elections, there are many in the Labour Party who feel we need to be very clear about a second referendum and about making the case for Remain.

“That’s certainly what I’m advocating. Discussions are going on at the moment. I hope we can resolve it pretty soon, and that will be a material step in the right direction as far as I’m concerned.”

Sir Keir, who has been tight-lipped on Brexit since becoming Labour leader in April 2020, has since admitted there is little chance of the UK rejoining the EU.

SNP leader Ms Sturgeon also frequently voiced her fury towards Brexit, using it as a reason why a second referendum on Scottish independence must be held.

Despite the UK voting in favour of Brexit during the June 2016 referendum, 62 percent of Scots voted for Britain to remain in the EU.

When the UK Government signed a post-Brexit trade deal with the EU in December 2020, Ms Sturgeon raged: “People in Scotland voted overwhelmingly to remain in the EU, but their views have been ignored.

“This is a far harder Brexit than could have been imagined when the EU referendum took place, damaging and disrupting this nation’s economy and society at the worst possible time.

“We are doing everything we can to mitigate against the consequences of the UK Government’s actions – but we cannot avert every negative outcome.

“We know that businesses are already struggling under the burden of COVID-19, and are now faced with the need to prepare for this hard Brexit in little more than a week’s time.”

She added: “Scotland did not vote for any of this and our position is clearer than ever. Scotland now has the right to choose its own future as an independent country and once more regain the benefits of EU membership.”

20/04/2022 Politics Comments Off on Brexit CHAOS: Starmer and Sturgeon in ‘cynical ploy’ to oust Boris and ‘reverse’ EU exit
Markets