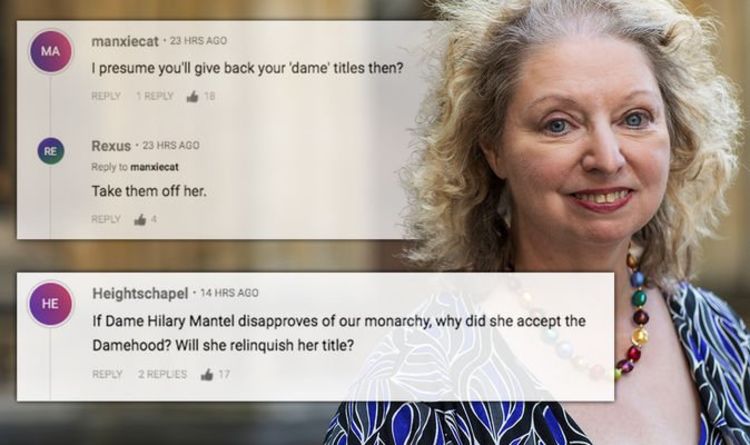 Hilary Mantel hits out at Dominic Raab over holiday

The Wolf Hall author, a frequent critic of Britain’s decision to quit the EU, told Italian newspaper La Repubblica she hoped to gain Irish citizenship, was “baffled” by the popularity of the Royal family, and believed Prime Minister Boris Johnson “should not be in public life”. She also claimed Home Secretary Priti Patel’s immigration rhetoric as “ugliest side of the new ‘global Britain’ post-Brexit”.

However, her remarks were given short shrift by Express.co.uk readers, many of whom highlighted her appointment as a Dame Commander of the Order of the British Empire in the 2014 Birthday Honours List for services to literature.

Ed Buscall told Express.co.uk: “Hilary Mantel appears to very much anti-English, but she was happy to be made a Dame.

“If she moves to Ireland and becomes an Irish Citizen and therefore a European as she desires, will she return her DBE, the same way that John Lennon returned his MBE?”

Others commenting on Express.co.uk’s story yesterday made similar points.

One said: “Mantel hates the Monarchy, hates Brexit, so she should move somewhere else just asap and then we might be spared her whinging and whining.

“Funny how she was happy to accept a Damehood, though.”

Another bluntly observed: “The UK IS EUROPEAN you womble. We voted to leave the EU.

The UK IS EUROPEAN you womble

“Leave your Damehood behind before the door you leave through before it hits you on the behind.”

Likewise, another reader asked: “If Dame Hilary Mantel disapproves of our monarchy, why did she accept the Damehood? Will she relinquish her title?”

Similarly, another posted: “I presume you’ll give back your ‘dame’ titles then?”, prompting another to state: “Take them off her.”

Plenty were concerned by Ms Mantel’s plans to relocate, with one reader saying: “Off you trot love!”

However, not everybody was as unsupportive.

One reader said: “She’s not the only one. As many of these angry, ill-informed responses show, many of the people who voted for this incompetent government and this xenophobic, disastrous Brexit are embarrassingly ignorant. Mantel is a brilliant novelist.”

Ms Mantel published The Mirror and the Light, the final book in her acclaimed Wolf Hall trilogy charting the rise and fall of Thomas Cromwell last year.

The Derbyshire-born 69-year-old, both of whose parents were Irish, told La Repubblica: “I don’t want to think that people are naturally slavish, and actually enjoy inequality, though I understand that they prefer change to continuity.

“I might breathe easier in a republic, and may be able to arrange it.

“I hope to loop back into my family story and become an Irish citizen.”

She added: “Our projected move has been held back by Covid, but much as I love where I live now, in the West Country, by the sea, I feel the need to be packing my bags, and to become a European again.”

She also dismissed the United Kingdom as “an artificial and precarious construct”.

Speaking of Mr Johnson, whom she said she had met several times, she stressed: “He should not be in public life. And I am sure he knows it.”

Speaking about the attempts of migrants to cross the Channel from France to the UK, she added: “We see the ugly face of contemporary Britain in the people on the beaches abusing exhausted refugees even as they scramble to the shore.

“It makes one ashamed. And ashamed, of course, to be living in the nation that elected this government, and allows itself to be led by it.”