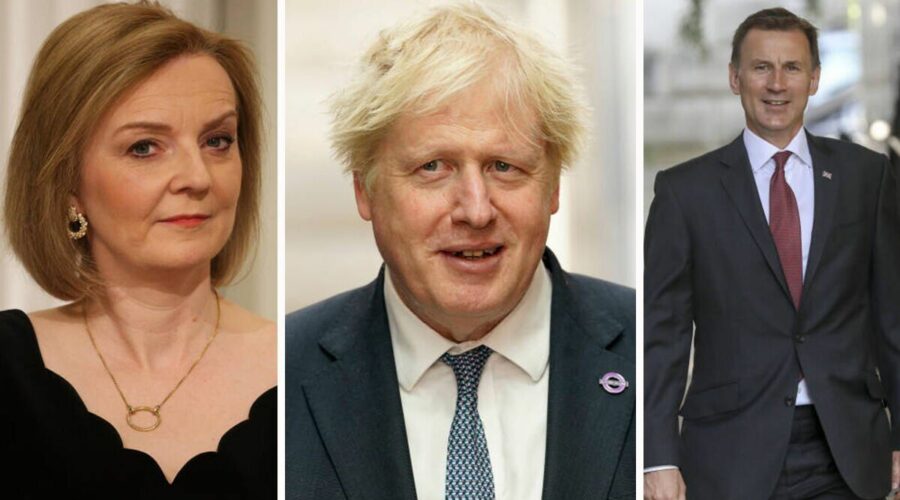 Sir Keir Starmer’s Labour Party is leading the calls from opposition MPs for Prime Minister Boris Johnson to resign without delay. Mr Johnson is facing fresh accusations that he lied to Parliament after ITV News published photos of the PM attending a lockdown party at Downing Street. Express.co.uk takes a look at the five Tories who are favourites to take up his role.

The Betfair Exchange has awarded odds of 11/5 that Mr Johnson will leave as PM by the end of 2022.

So, if he were to resign from office, who are the top Tory candidates that could replace him?

Foreign Secretary Liz Truss has emerged as the joint-favourite to replace the incumbent PM, after Chancellor Rishi Sunak’s popularity plummeted in the past two months.

She has become a more prominent name to the wider public following her appointment as Lord David Frost’s successor to the role of the UK’s chief negotiator on Brexit.

Ms Truss is a favourite among the Conservative Party’s grassroots members, and has served as an MP since 2010.

Jeremy Hunt is tied with the Foreign Secretary as the favourite to succeed Mr Johnson.

Mr Hunt ran against Mr Johnson in the 2019 leadership election and currently holds the position as Chair of the Health and Social Care Committee.

He views himself as a “John Major” figure who could “come up through the middle” and is seen by some as “a soothing antidote to Liz Truss”, reported the Sunday Times.

A veteran of the war in Afghanistan, Tom Tugendhat was tipped as a “rising star” and touted as a “possible future Tory leader” by Andrew Gimson on Conservative Home in 2017.

He’s well-respected within the party and is the Chair of the Foreign Affairs Select Committee.

But having served little more than seven years in politics, it would be somewhat of a shock to see Mr Tugendhat become the next PM.

According to Politics Home, trade minister Penny Mordaunt is emerging as a “dark horse” candidate to replace Johnson.

As the MP for Portsmouth North, she is viewed as a popular figure within the Conservative Party.

In 2019, Ms Mordaunt was appointed secretary of state for defence, becoming the first woman to hold the post.

Defence Secretary Ben Wallace holds one of the most senior positions in the Government and has worked as an MP for more than 20 years.

Since Russia’s invasion of Ukraine last February, he has become a more familiar face with the public, often explaining how Britain is supporting Kyiv’s war efforts.