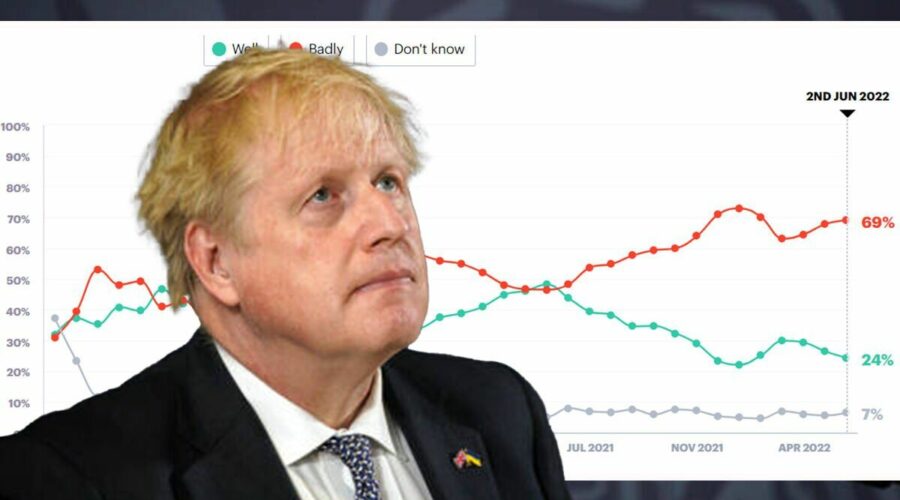 Boris Johnson says 'I'm going to get on with my job'

Prime Minister Boris Johnson has endured a tough past month, owing to recent developments in the Partygate scandal. The PM has faced a backbench rebellion of his own MPs, which led to a vote of confidence, earlier this week. Though he emerged victorious from it, calls from all parties for Mr Johnson to resign have only grown in their intensity.

What is Boris Johnson’s approval rating?

Mr Johnson has an approval rating of 24 percent – correct as of June 2 – according to YouGov.

Compared with last month, the PM’s score has dropped by two percentage points.

The number of participants who thought he was doing “badly” in the role grew from 68 to 69 percent.

And the amount of people who were “unsure” also increased by one percentage point to seven percent.

In total, between 1,623 and 3,326 British adults were surveyed as part of the monthly tracker.

Mr Johnson’s score is now just two percentage points away from the lowest score he’s ever recorded with the pollster.

Back in January 2022, the incumbent PM registered an approval rating of 22 percent.

A separate poll by Conservative Home has found that Mr Johnson now has the worst approval score of anyone in his Cabinet.

Its research was published on May 30 and identified that the PM’s rating stands at minus 15.

But the score was not the lowest Mr Johnson has ever posted with the site. Five months ago he recorded a ranking of minus 34.

Douglas Ross, leader of the Scottish Tories, and the party’s co-Chairman, Ben Elliot were the only other Conservative MPs that were listed with negative ratings.

Defence Secretary Ben Wallace, holds the highest score in the “Cabinet League Table”, with a ranking of 85.

He is closely followed by Education Secretary, Nadhim Zahawi (66.2) and Anne-Marie Trevelyan, the International Trade Secretary, who was awarded a score of 64.6.

Why has Mr Johnson’s rating dropped?

Last month Sue Gray was able to make public all of the findings from her investigation into Government lockdown parties.

The report was heavily critical of Mr Johnson’s Government, and confirmed that he had been present at eight of the 12 parties she looked into.

Though the PM was only fined for attending his Downing Street birthday party, in June 2020, he has been accused of wilfully misleading MPs – a claim he vehemently denies.

Criticism has also been levelled at the Government for the level of support it’s so far offered families, to stave off effects from the cost of living crisis.

British inflation is now at its highest level for 40 years, while soaring energy bills and fuel prices are further compounding finances for Britons.