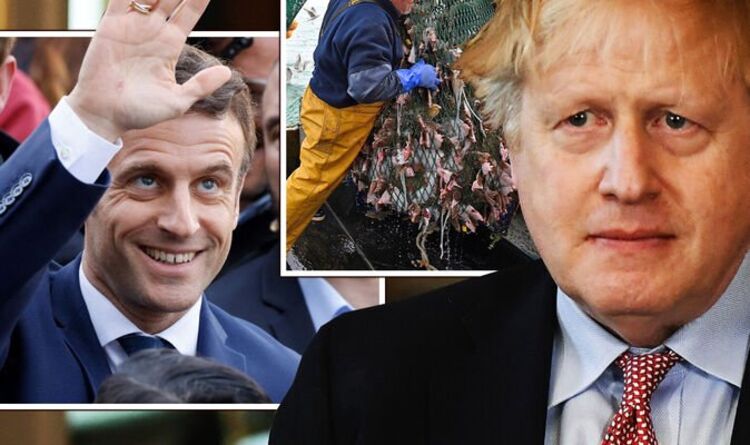 The feud appears to have ended after the European Union fishing commissioner said all licences requested by French boats to operate in UK coastal waters had been granted, with around 70 permits outstanding. The Brexit deal signed at the end of 2020 ensured the UK’s share of fishing quotas in its waters jumped by 25 percent from 2021 to 2026 but in territorial waters 6-12 miles from the coast, Britain had granted permission for French vessels who had previously fished there to continue.

The two countries have been feuding over the issue ever since, which has seen French boats blocking the harbours in Jersey and France threatening to ask the EU to take legal action over the matter.

But in a major twist, EU fishing commissioner Virginijus Sinkevicius told the Financial Times: “The commission fully intends to continue building a successful and constructive relationship with the UK.

“We managed to achieve most of the licences that have been requested.”

This has sparked a furious reaction from Brexiteer and former Brexit Party MEP Ben Habib, who accused Mr Johnson of surrendering the UK’s fishing rights.

He told Express.co.uk: “It is the typical Boris Johnson and UK Government approach to all our dealings with the EU – lots of bluster, lots of apparent resistance, a big public spat but then we capitulate.

“That’s what we did in the run-up to the Withdrawal Agreement in 2019, the Trade and Cooperation Agreement in 2020 and we’re busy capitulating on the Northern Ireland Protocol.

“This was the last bit of defence we had on fishing but in all respect, we had already surrendered that anyway and we have surrendered these last bits too.

“All I see is a Government unable and incapable of standing up to the EU.”

Mr Habib accused the Prime Minister of breaking promises around the fishing rights of UK fishermen, describing the “major capitulation” as an “utter disaster”.

He continued: “This fishing truce is the last little bit of major capitulation.

“The Prime Minister has not taken back control of fishing like he said he would, this has so far not been subject to annual negotiations like he said in the House of Commons in December 2019.

“He said it would be annually set by us depending on what British needs are.

“The French rattled our cage by threatening to cut off electricity supply to Jersey, they rammed our fishing boats and impounded our ships in their harbours.

“The whole thing is an utter disaster. I don’t know what is wrong with our Prime Minister.”

Last week during a visit to Brittany, Emmanuel Macron insisted the French Government had kept its promise to protect its fishermen and 90 per cent of licences had been retained.

A British official told the Financial Times: “We haven’t heard anything from France for weeks. The dispute has gone quiet.”

In November, Mr Sinkevicius had brokered talks between the UK and France, with the number of outstanding licences dropping to around 70.

He said permits granted in 2021 have been renewed for 2022, with a few additional permits obtained from the UK.

Additionally, 131 French vessels have permits to fish around Jersey and 44 around Guernsey.

Mr Sinkevicius said: “Throughout the year a spirit of good neighbourliness and then relations based on mutual co-operation and respect have generally prevailed.

“We have to understand France and especially those regions who, basically from their shores, can see Jersey and Guernsey. They always had a relationship with them.

“They used to fish in each other’s waters and really live well with each other and then Brexit really reshuffled this relationship.

“When it comes to the commission side, we will always support our fishermen and will always stand behind them.”

11/04/2022 Politics Comments Off on ‘Boris has surrendered!’ Brexit fury as PM CAVES on fishing and hands major win to France
Markets