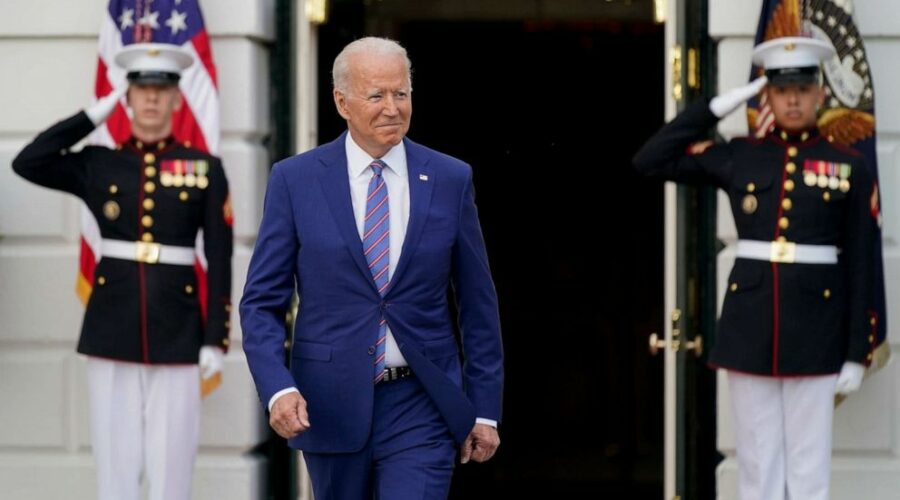 The nation is not quite where President Joe Biden wanted it to be when it comes to vaccinations and the recovery from COVID-19.

But it’s getting there — “America is coming back together,” the president said on the Fourth of July — albeit with some trepidation about what might come next. How it proceeds from here is inextricably linked to Biden’s political sway, in ways that reach far into the potential for his agenda to become law.

The latest ABC News/Washington Post poll shows how vital COVID recovery is to Biden’s standing. His approval on handling the pandemic stands at 62% — 12 points above his overall approval rating, at a time of growing dissatisfaction with his handling of issues including crime and immigration.

It appears as if his handling of the pandemic is propping Biden up, in something of a reverse of how his predecessor’s handling weighed him down.

On Tuesday, Biden’s first post-holiday events include a briefing on COVID and an afternoon speech on recovery and vaccinations. The White House is pushing dual-track messaging, emphasizing the need for vigilance and vaccinations in defeating the virus, alongside advocacy for major new economic investments.

“While the virus hasn’t been vanquished, we know this: It no longer controls our lives. It no longer paralyzes our nation,” Biden said Sunday.

This critical summer for the pandemic coincides with a critical legislative stretch for the president’s agenda. Biden and his party are banking on progress in both areas in the months to come.

We’re getting closer to knowing the victor in the seemingly endless New York Democratic mayoral primary.

Though polls closed two weeks ago, Tuesday is the day more than 125,000 absentee votes and affidavit votes will be factored into the ranked-choice vote tabulation, offering the clearest picture yet of who could be the next mayor of the nation’s largest city.

The election night totals and the first ranked-choice vote tabulation have shown Brooklyn Borough President Eric Adams leading and Sanitation Commissioner Kathryn Garcia coming in at a close second — but absentee and affidavit votes add a layer of unpredictability to the drawn-out race.

Adams, Garcia and Maya Wiley, former counsel to Mayor Bill de Blasio who came in third in the last tabulation, have all filed petitions in court calling for the Board of Elections to preserve ballots and correct errors in the count after a New York City BOE blunder caused dummy test votes to be included in the ranked-choice tabulation.

If Garcia, takes the lead after the absentee and affidavit tally is calculated she could be the city’s first female mayor. Adams could be the city’s second black mayor. The winner will face Republican primary winner Guardian Angel Founder Curtis Sliwa, though the Democratic candidate is widely expected to replace lame-duck Mayor de Blasio.

The TIP with Alisa Wiersema

The first half of 2021 put Texas at the forefront of Republican politics and now, the race to decide who will lead the Lone Star State going into the next presidential cycle is heating up.

Over the holiday weekend, Allen West, who recently resigned from his post as Texas GOP Chairman, announced plans to challenge sitting Republican Gov. Greg Abbott. Although West did not mention Abbott directly in his campaign announcement video, he’s been a staunch critic of the incumbent governor throughout the pandemic and frequently attempted to push the party farther to the right.

In addition to West’s high-profile bid, speculation continues to grow over whether Texas native son and actor, Matthew McConaughey, is preparing to announce a gubernatorial run of his own. While it’s unclear which party the actor would run under if he joined the contest, McConaughey’s apparent interest in the nation’s well-being was put on display in a cryptically patriotic video posted to Twitter on July Fourth with the caption, “happy 245th birthday America – lets rock.”

“Let’s also remember that we’re babies as a country. We’re basically going through puberty in comparison to other countries’ timeline, and we’re going to go through growing pains,” he said before adding that Americans need to maintain hope as the country evolves “because the alternative sucks.”

At 96, Jimmy Carter is the oldest-living American president and the longest-living president in this country’s history. He and his wife have known each other most of their lives — they lived close by in their hometown of Plains, Georgia, and Rosalynn Carter was best friends with Jimmy Carter’s little sister, Ruth. Amid the pandemic, “We have hardly left our house,” the 39th president said. “Before that we had not been together all that much — ordinary family travel and so forth.” | “It was just Jimmy and me,” Rosalynn Carter said. “And it was really wonderful.” Watch ABC News’ Steve Osunsami’s interview of the couple ahead of their 75th wedding anniversary on Hulu Tuesday. https://abcn.ws/3dM6Ju7

FiveThirtyEight’s Politics Podcast. On Thursday, the Supreme Court began its summer recess with a 6-3 conservative majority on the bench, giving some insight into its new ideological orientation after the addition of Justice Amy Coney Barrett in October. Analysts have described the court this term as largely avoiding a hard right turn, with more unanimous decisions and idiosyncratic splits than expected. In this installment of the FiveThirtyEight Politics podcast, FiveThirtyEight contributor Laura Bronner shares what the data can tell us about the ideological direction of the court, and legal scholar Kate Shaw digs into some of the specifics of the term’s major cases, particularly on election law. https://53eig.ht/2UmC3IV