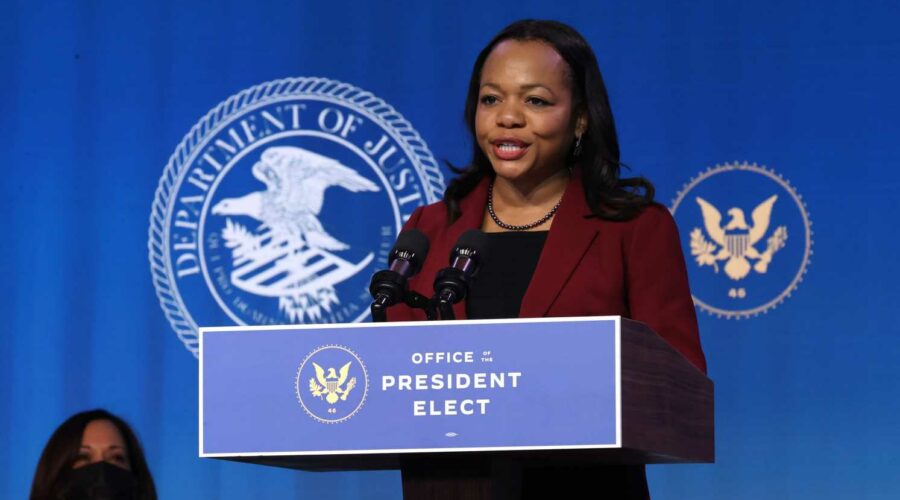 WASHINGTON – Kristen Clarke, President Joe Biden’s pick to be the Justice Department’s civil rights chief, is promising to make racial equality a top priority, drawing on her experiences as a longtime civil rights attorney and the mother of a Black teenager.

“As I look to my own son … I remain committed to the promise of working every day to build a world of equal opportunity for all,” Clarke said in a prepared opening statement. “A world where no 16-year-old is the target of hateful language. A world where no young man is racially profiled. I dream of a world that values his mind, his heart … and does not push him aside because of the color of his skin. I dream of that for every child in America.”

Clarke’s confirmation hearing, which is expected to be contentious, begins on Wednesday.

If confirmed, Clarke would be the first Black woman to fill the post. She is expected to play a pivotal role in the Biden administration’s efforts to reinvigorate the Justice Department’s investigations of police departments, as well as in the prosecution of hate crimes and enforcement of voting rights laws.

Her nomination follows a summer of social justice protests prompted by deaths and injuries of Black men and women during police encounters, including George Floyd and Breonna Taylor. This week, protests erupted in Minneapolis after a police officer shot and killed Daunte Wright during a traffic stop.

COVID-related hate crimes against Asian Americans have also escalated, and conservative states have started an aggressive effort to pass laws that advocates say would make it harder for minority voters to vote.

Since her nomination, Clarke, president of the Lawyers’ Committee for Civil Rights Under Law, has been accused of anti-Semitism by critics drawing from an incident 25 years ago, when Clarke’s student group at Harvard University hosted an author accused of promoting anti-Semitic views. Clarke has said she regretted inviting the author, Tony Martin.

Conservative media outlets have also honed in on a nearly three-decade old letter that Clarke co-wrote for the Harvard Crimson when she was president of the Black Students Association at the university. Clarke, responding to the 1994 book “The Bell Curve,” which links race and intelligence, wrote that melanin in their skin gives Blacks “superior physical and mental abilities.”

In a recent interview with the Forward, Clarke said her intention in claiming Black superiority was “to express an equally absurd point of view – fighting one ridiculous absurd racist theory with another ridiculous absurd theory.”

Clarke and Vanita Gupta, another Biden nominee for a top job at the Justice Department and also a woman of color, have drawn unusually bitter criticisms from Republicans and conservative groups before their confirmation hearings. Sen. Mike Lee, R-Utah, has signaled he intended to explore Clarke’s views and question her suitability to lead the Civil Rights Division.

In her opening statement, Clarke touted her experience in advancing civil rights. “In every role I’ve held, I have worked with and for people of all backgrounds – regardless of race, national origin, religion, or disability status,” she said.