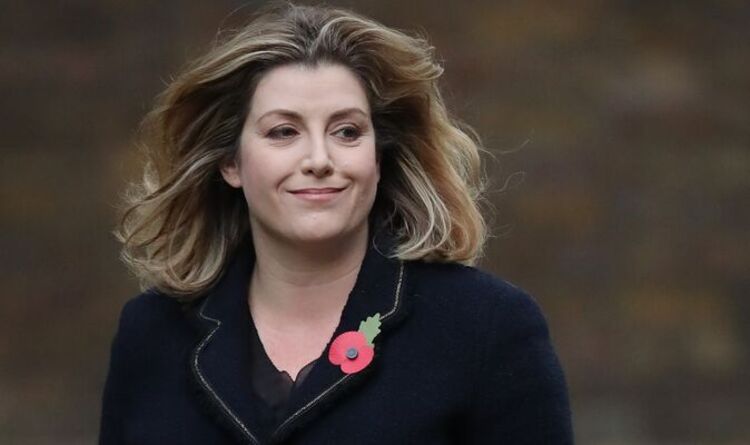 Penny Mordaunt hits out at the EU over Northern Ireland

UK ministers have moved to strike “mini” trade deals with individual US states after Joe Biden, 79, suggested he had little interest in pursuing a full trade agreement between Brexit Britain and America. The Brexit-backing Trade Minister Penny Mordaunt, 48, has travelled stateside to rally up support for new deals.

Ms Mordaunt, tipped by many as a dark horse in a leadership contest if 57-year-old Boris Johnson is ousted from office, visited California, Georgia, Tennessee, Oklahoma and South Carolina.

Trade Secretary Anne-Marie Trevelyan, 52, is also expected to visit the US later this year.

A Department for International Trade insider told the Sun: “From York to New York, Birmingham in the Midlands to Birmingham Alabama – we want to turbo boost UK and US businesses.

“When you look at the numbers, the wins on offer by bagging trade agreements with individual states are massive.

“California’s economy alone is larger than the economy of the whole of France.”

State-by-state deals could remove barriers on the services sector, which accounts for 64 percent of the total export market to the US at £83.7billion.

However, imposing and removing tariffs on goods remains a power exercised by the American executive.

A source told the Times: “People get excited about tariffs on goods but both Britain and America have huge service economies.

“Anything we can do to make that trade easier will be hugely beneficial.”

A spokesperson from the Department for International Trade added: “We already have a thriving economic relationship with the US, our single largest trading partner, but there’s a wealth of opportunities to build even deeper ties at both a federal and state level.

“We want to make it easier and cheaper for UK and US businesses to work together.”

While sources claim they are yet to give up hope of signing a trade deal, many Remainers are quick to mock Brexiteers for failing to sign a trade deal with the USA and have reminded Brits that Barack Obama, 60, warned the UK would be at the “back of the queue” during the referendum.

Mr Biden seems to agree with his former running-mate and is said to have made it clear privately that the US will not go into negotiations until issues over the Northern Ireland Protocol are resolved.

Critics of Brexit have cited comments made by Eurosceptic campaigners in 2016 lauding the potential transatlantic deal as a benefit of leaving the Brussels bloc.

The Vote Leave campaign website claimed while a member of the EU: “We have no power to make free trade deals with fast growing economies like India and China – or even key allies like Australia and New Zealand.

Since severing ties with the Brussels bloc, Brexit Britain has signed bespoke agreements with Australia, New Zealand, Japan and the European Union.

It has also rolled over more than 60 additional agreements, stretching from Kenya to Kosovo and Switzerland to Singapore.

Cornelius Clarke, from the global financial services firm Ebury, suggested the UK could look to benefit from further Brexit gains despite issues since the transition period ended.

He said: “Evidently the end of the Brexit transition period has impacted trading relationships that many UK businesses have with their EU counterparts.

“Other factors at play were the restrictions faced by lorry drivers in response to the Alpha variant at the start of 2021 alongside global supply chain bottlenecks.

“The ongoing free-trade negotiations with India could also present a significant opportunity for UK importers too in lowering costs and barriers to trade with a rapidly growing global economic superpower.”