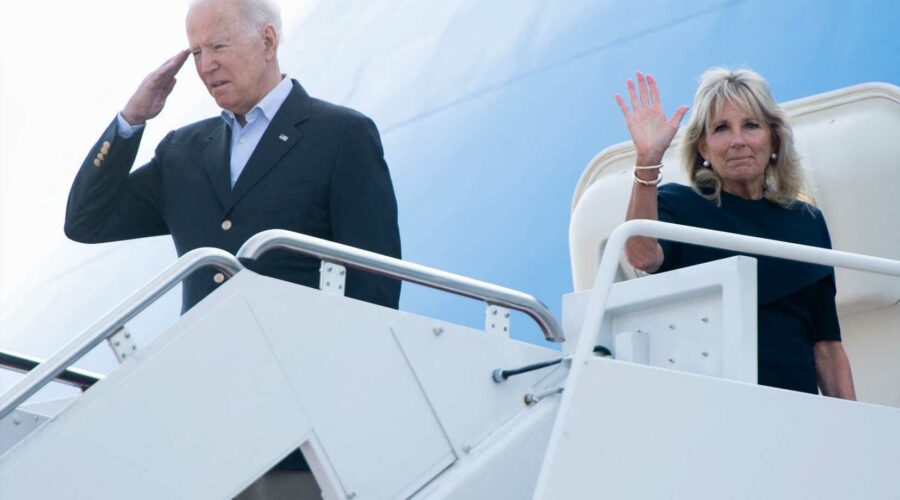 President Joe Biden and First Lady Jill Biden arrived in Surfside, Florida Thursday to visit with families and first responders near the site of a deadly condominium tower collapse.

The president and first lady will offer comfort to families who are growing desperate for news of their loved ones, eight days after the 12-story Champlain Towers South condominium tower collapsed suddenly early Thursday morning.

In addition to the in-person meetings, Jean-Pierre said Biden wants to ensure that state and local officials have all the federal resources they need.

Early this morning, the Federal Emergency Management Agency deployed 60 staff and an additional 400 personnel across five search and rescue teams at the request of local officials, said Jean-Pierre.

Those teams would be on site today, she said, with two additional urban rescue teams on standby to rapidly deploy if needed.

FEMA has also awarded $20 million to the state's Division of Emergency Management for emergency measures, Jean-Pierre told reporters, and the federal government is ready to support local and state unbudgeted costs associated with the disaster.

As of early Thursday, 18 people were confirmed dead and 147 were unaccounted for, according to local officials.

In recent days, a growing body of evidence has come to light indicating that the 40-year-old condominium building showed signs of major structural damage as far back as 2018.

A newly uncovered video taken the night of the collapse shows water pouring into the parking garage of Champlain Towers.

On Wednesday evening, the National Institute of Standards and Technology announced it had launched a federal investigation into the causes of building collapse.

"We are going in with an open mind," Judith Mitrani-Reiser, associate chief of the materials and structural systems division at NIST, told reporters Wednesday at a press conference near the site of the collapse.

"With any building collapse, we would want to understand how the building was designed, constructed, modified and maintained," she said.

Several lawsuits have already been filed on behalf of the families of victims, some of whom are still missing.

But the question of who, if anyone, is at fault for the collapse is not likely to be resolved in the near future.

James Olthoff, the director of NIST, told The Miami Herald the federal investigation would not seek to assign blame for the collapse.

"This is a fact finding, not fault finding, type of an investigation," he told the Herald. "It will take time, possibly a couple of years."