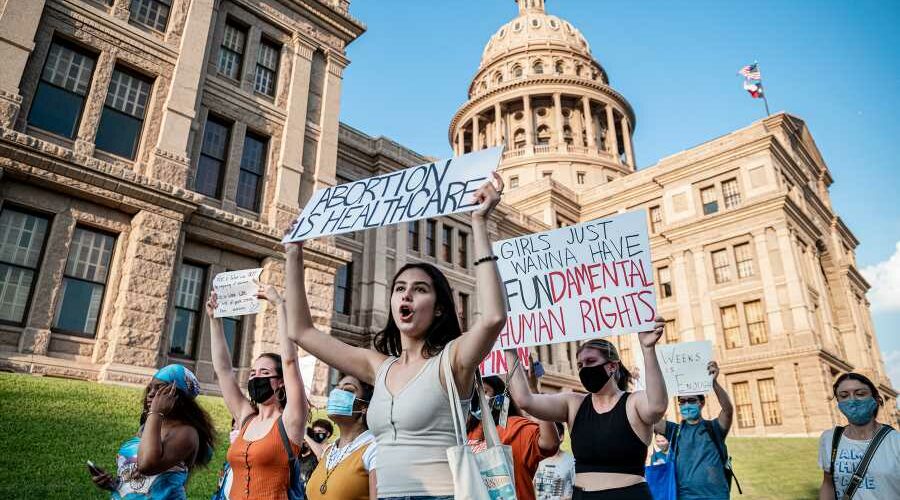 The Biden administration filed suit against the state of Texas on Thursday to stop enforcement of the Texas Heartbeat Act, the law that effectively ended abortion care in the state when it went into effect earlier this month.

Speaking from Austin, U.S. Attorney General Merrick Garland called the law “clearly unconstitutional under long-standing Supreme Court precedent.” Garland went on to call the law, S.B. 8, an “unprecedented scheme” designed to do an end run around the Constitution by deputizing private citizens, rather than Texas officials, to enforce the ban.

In the lawsuit, lawyers for the Justice Department asked for S.B. 8 to be declared “invalid, null, void,” and for an immediate injunction stopping enforcement of the law in the interim.

Chaos has reigned at clinics across the state since the law went into effect on September 1st. The arbitrary nature of the Texas’ law — which bans abortions after “cardiac activity” can be detected in an embryo, or at roughly six weeks — has been difficult to navigate even for patients who schedule an abortion as soon as they learn they are pregnant. One patient recently arrived for an appointment at a Planned Parenthood Gulf Coast health center and submitted to a state-mandated ultrasound, but when she returned to the clinic 24 hours later to have the procedure, she was told that the doctor could no longer perform it — during the state-mandated waiting period, the embryo had begun exhibiting cardiac activity. Instead of performing the abortion, workers at the health center had to pivot to help the woman seek care out of state. A spokeswoman for Planned Parenthood Gulf Coast called it the “nightmare scenario.”

Since September 1, calls to Planned Parenthood’s Texas clinics have more than quadrupled in length, from five minutes to more than 20, as patients struggle to understand what options are available to them, depending on their circumstances.

Legal experts expect the DOJ suit, which calls for an injunction against the state of Texas — “its officers, employees, and agents, including private parties who would bring suit under S.B. 8,” to make its way to the Supreme Court in fairly short order. The Court previously declined to intervene and stop the law from going into effect, citing provisions that don’t apply to the new case, giving advocates hope that a different outcome may be possible.

The suit is a bright spot for advocates demoralized over the Supreme Court’s decision allowing the law to go into effect. (One lawyer, who has been working in the field for more than 20 years, told Rolling Stone that in the wake of the Texas law, and the Supreme Court’s response, access has never felt so tenuous — “It’s really frightening.”)

But on Thursday afternoon, Nancy Northup, president of the Center for Reproductive Rights called the suit  “a game-changer,” hailing the Department of Justice for joining the “battle to restore constitutionally protected abortion access in Texas and disarm vigilantes looking to collect their bounties.” Adrienne Kimmell, acting president of NARAL, said the suit sends “a strong message to anti-choice lawmakers across the country who are racing to enact copycat versions of SB 8 in their own states.”

Unlike other state laws that have attempted to outlaw abortion at six weeks, the new Texas law deputizes private citizens to police abortion access in the state by offering a $10,000 bounty for anyone who is found to have “aided or abetted” an abortion, whether that’s a physician, a clinic worker, a pastor, a romantic partner — anyone who provided support.

In the days since the law went into effect on September 1st, abortion providers in Texas, wary of a torrent of lawsuits, and the potential impact such litigation might have on their malpractice insurance — each suit generates an automatic report to the medical board that impacts their medical license — have stopped providing abortions after the point that cardiac activity can be detected, in compliance with the new law. No one is known to have filed a case under the new law at this point.