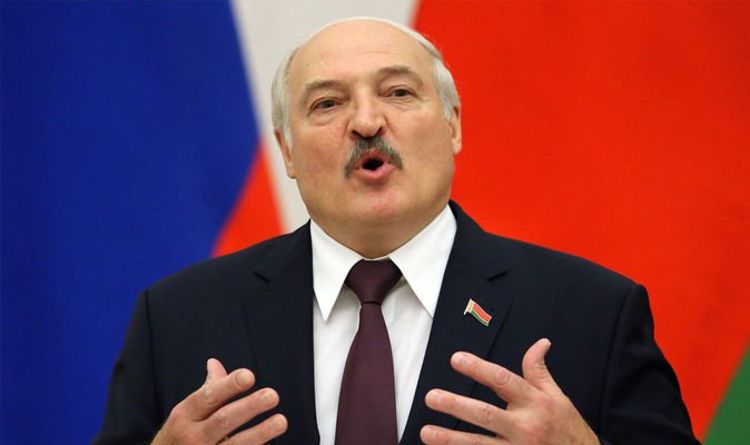 Alexander Lukashenko vows he will 'not stop' migrants crossing

The UK is readying to deploy additional troops to Poland and Lithuania as the migrant crisis along their shared border with Belarus continues. The Ministry of Defence (MoD) announced that 140 military engineers will be sent to Poland, adding that a separate team has also been sent to Lithuania. In a statement, the MoD said: “Poland and Lithuania, along with their Baltic neighbour Latvia, have been under significant pressure from migration originating from Belarus and facilitated by the Lukashenko regime for a number of months.”

Migrants began making their way to Belarus’ western border — which doubles as the EU’s eastern frontier — since this summer.

Many believe that Mr Lukashenko allowed the build up in reaction to a number of sanctions slapped on Belarus after allegations of human rights abuses, and after a RyanAir flight was diverted to Minsk.

Onboard the flight was opposition journalist Raman Pratasevich and his girlfriend Sofia Sapega, both of whom were arrested.

Since the first migrants reached the border, thousands have made similar journeys, attempting to cross into the EU and claim asylum.

Most, however, have been stuck at the border which is covered in dense forest and, unable to cross, are currently living in freezing and inhumane conditions.

Professor Matthew Longo, a political scientist at Leiden University in the Netherlands, suggested that the influx of migrants and their ease of passing through Belarus could be Mr Lukashenko’s way of saying “f*** you to the West”.

He told Express.co.uk: “The cynical view says we have been using borders as a way to hurt states forever.

“We’ve loved the fact that these places that we frankly don’t care about have to deal with the problem of migration, and ideally stop migration from getting to us.

JUST IN: Varadkar to rage at ‘disgraceful’ Brexit plan

“It’s not remotely weird that an inspired autocrat would basically say, ‘F*** you to the west: no, you’re going to play this game too. If you’re going to make this into a buffer zone, let’s flip the metaphor and say that now, we’re going to turn ourselves into a highway — we’re going to be the superhighway for people to get from wherever they are to you.’

“Why? Because in the Belarusian case, what is Lukashenko doing? He’s basically angry at the world and the international organs for saying that his election was fake, that his rule is illegitimate.”

Leaders in Brussels have since met to discuss whether to curb some migrants’ rights to ward off what the bloc has described as a hybrid attack by Minsk.

The European Commission has proposed that Poland, Lithuania and Latvia be given powers to restrict the rights of those crossing into their countries, and by extension the EU.

Ministers meeting in the European Parliament have condemned Mr Lukashenko, urging him to end what they say is a mass humanitarian crisis.

Nancy Faeser, Germany’s new interior minister, said of the Belarusian President: “He capitalises on the distress of the people to play for a domestic audience.”

She added that migrants’ fundamental rights needed to be respected, and said: “It is important that legal standards are upheld at the border, which is why I would welcome a deployment of (the EU’s border agency) Frontex there, and it is just as important that aid organisations have access (to the migrants) at all times.”

The UK’s plans to deploy more troops along the Polish and Lithuanian borders comes amid increased tensions with Russia over its military presence near the Ukrainian border.

Foreign Secretary Liz Truss said on Wednesday that it would be a “strategic mistake” for Russia to ramp up aggression against Ukraine.

Mr Lukashenko has in Russia and Vladimir Putin a close ally.

This week, Russia delivered a new batch of BTR-82A combat vehicles to Belarus.

According to the Belarusian Defence Ministry, they will enter service with the mechanised brigade stationed in the western Grodno Region — an area that borders both Poland and Lithuania.

In a press release, the Ministry said: “A train with BTR-82A armoured personnel carriers has arrived from the town of Arzamas in the Russian Federation to the Grodno garrison for the 6th separate Guards mechanised brigade.

“This is a planned delivery of military hardware from the Russian Federation under the planned rearmament of the armed forces of our state.”