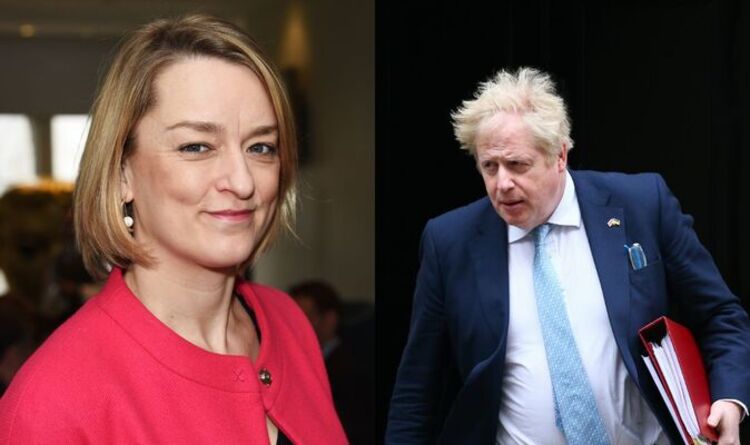 Laura Kuenssberg believes if Prime Minister Boris Johnson is to be fined for lockdown breaches, “there are going to be lots of Conservative MPs who will be thinking again” about whether the Prime Minister can be trusted to lead the country. The BBC’s political editor asked if it is really tenable to have a “lawbreaker as a lawmaker” as the Prime Minister was unable to abide by his own Covid-19 precautions.  The allegations against the Prime Minister have made many members of the public “see red” as they were forced to follow the very rules their leader is accused of breaching.

The BBC News political editor made clear that Boris Johnson will “inevitably [face] some kind of political consequences”.

Ms Kuenssberg explains how the accusations and ongoing investigation have presented “a very nasty box of embarrassment for Boris Johnson”.

While she did not speculate on the legal outcome of the case, Ms Kuenssberg did suggest that “if he is fined” his new position as a “lawbreaker” would undermine the powerful political position he currently holds.

She also suggested much of the Conservative party would have to reconsider their support for an individual who has acted wrongly and abused a position of high power and influence.

The Prime Minister has faced considerable political backlash, including criticism within his own Conservative party.

She said: “Many Tory MPs contemplated getting rid of Boris Johnson.”

While the political editor acknowledges that “some of them said that publicly”, she highlighted that “more of them were thinking privately about how to make it happen.”

However, the political debate and public fury surrounding the Prime Minister’s actions were somewhat forgotten as the Russian invasion of Ukraine overpowered politics.

“The invasion of Ukraine basically tore up the priority list,” explained Kuenssberg.

While the war in Ukraine “quite rightly and quite understandably” took priority, global political leaders and much of the public were distracted from the investigation surrounding Downing Street.

As a result, there remain many questions regarding the “who, and what and how many people” as critics of the Prime Minister call out for answers.

While the invasion of Ukraine has dominated politics and media considerably over the past few months, the Prime Minister has been unable to escape the accusations against him.

The Prime Minister has already been sent a questionnaire by the Metropolitan police as part of an investigation into the breach of lockdown rules at Downing Street.

The Met police have so far announced they will be issuing 20 fines surrounding lockdown breaches in Downing Street and Whitehall.

The Prime Minister has spoken out to say he has not yet received such a fine from the police and promised that, if he does, he will make this public knowledge.

The political scandal dubbed ‘Partygate’ continues to unfold as the Met investigation continues.