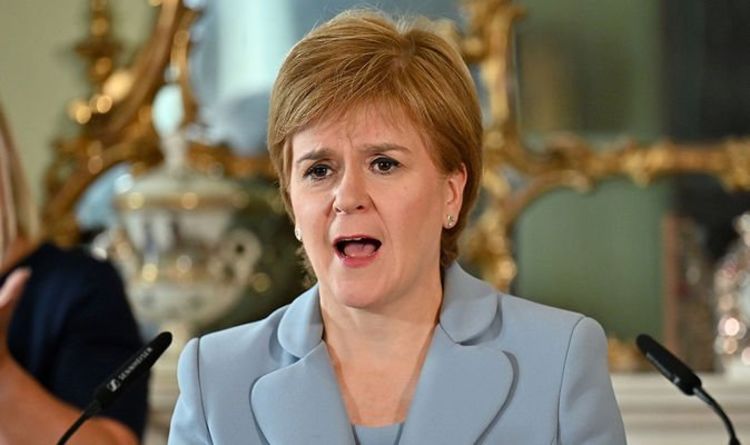 SNP MP Tommy Sheppard was heckled by a BBC audience as he struggled to defend Scotland’s plans for independence. BBC Any Questions host Chris Mason took Mr Sheppard to task after he suggested that “no-one is debating whether Scotland could be independent”. The BBC host pointed to recent news this week that Scotland’s budget deficit ballooned to 22.4 percent.

The SNP Constitutional Affairs Spokesperson at Westminster said: “You can ask whether Scotland should be independent.

“But I don’t think there is a debate about whether Scotland could be independent.

“Scotland is a country that ranks 14th in the world in terms of GDP, it has highly developed social and physical infrastructure, and enormous natural resources.”

Mr Mason interrupted him: “And yet you have 22.4 percent deficit?”

This prompted heckles and boos from the BBC audience, which was taking place in Haddenham Village Hall.

Mr Mason said: “And yet you have a budget deficit of 22.4 percent?

“It has got to be closer to 3 percent to rejoin the EU, which you are keen to.

“And now you are shacked up in coalition with the Greens, who are suspicious of endless economic growth.”

Mr Sheppard blamed the huge rise in the deficit on the coronavirus crisis.

However, Mr Mason pointed out that prior to the outbreak of Covid, Scotland’s deficit was still one of the highest in Europe at 8.6 percent.

On Friday, the SNP and the Scottish Greens agreed to hold an independence referendum within the first half of the five-year parliamentary term.

Nicola Sturgeon announced that the SNP and Greens will co-operate at Holyrood on key areas like the environment and economic development.

Kate Forbes, Scotland’s finance secretary, insisted the latest data on the deficit would not stop the SNP from turning its focus back to independence after the coronavirus crisis.

She said: “It is not an obstacle to making the case for independence because deficits across the world have risen exponentially.”