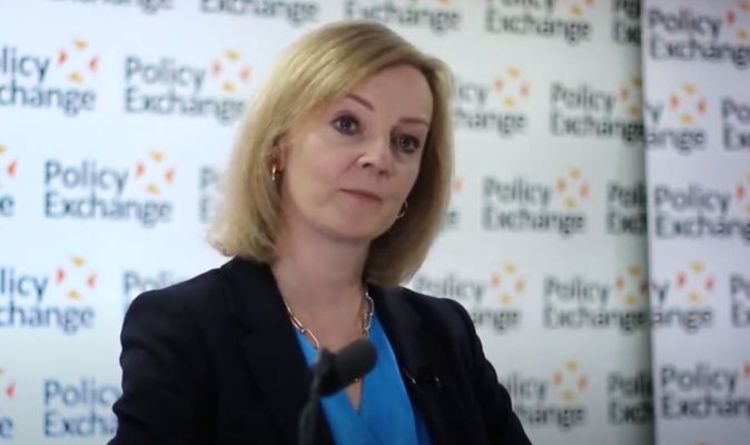 Liz Truss: Trade deals are being set up at the 'right speed'

Amid a period of strained relations, Ms Truss insisted trade with China “must be reliable” during a speech today. She also warned any trade with the state must be done in accordance with international rules. During her speech, hosted by Policy Exchange, Ms Truss insisted the UK is also working with allies to challenge any unfair trading practices.

In conclusion, she insisted the UK’s values cannot be “undermined” by any trade the country does with China.

“What I want to make sure is that trade with China is reliable, it’s stable and is in accordance with international rules.

“We are having a direct conversation with China about that and our allies to stop things such as unfair subsidies.

“I talked earlier on how important it is the trade we do underpins our values of free-trade and democracy.

“What we can’t have is those values being undermined by the trade we do.

“Trade with China is important, we want to make sure it’s reliable but we don’t want to become strategically dependent on China.”

Ms Truss’s comments come at a time where the EU has been forced to delay its investment deal with China.

According to figures from the UK Government, China stands as the fifth-largest destination of exports.

In further figures from the Office for National Statistics, the UK imported more goods from China than any other country since quarter 2 in 2020.

Imports of goods from China accounted for 16.1 percent of UK goods in quarter 1 of 2021.

In the Department for International Trade’s Global Trade Outlook published on Tuesday, it found the centre of global economic gravity is moving away from Europe.

By 2030, it found three of the four largest economies will be in the Indo-Pacific region.

Now free from the shackles of the EU, Ms Truss called on the UK to jettison some of our outdated assumptions.

She said: “In order to get those opportunities, we do have to jettison some of our outdated assumptions and attitudes.

“We have spent 50 years in the EU and it is natural that, whether it is business, whether it is people employed by the Government and others, there are certain ideas that have been shared and promulgated and are still present in some quarters.

“Sometimes there can be a lack of self-belief.”