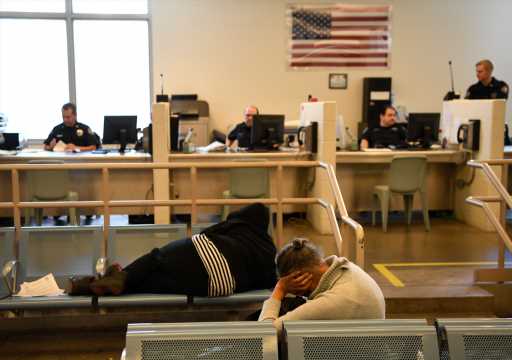 The Denver County Sheriff’s Department wants to hire a private company, Aramark, to serve meals to its inmates. But inmates in Jefferson and Arapahoe county jails — not to mention state prisons across the country — have complained of Aramark’s rotten and expired food, food that’s been stored at improper temperatures and too-small portions.

The sheriff’s department said there aren’t enough low-level offenders at Denver’s jail and downtown detention center anymore to work in the kitchen, which is why they asked for bids this spring. Aramark won the $9 million, two-year proposed contract that starts July 1 and ends June 30, 2023, according to city documents.

Two Denver City Council members say they are now examining the company’s history before they vote whether to approve the contract. Just this year in Mississippi, the state ended its agreement with Aramark, something Michigan did in 2015.

In a presentation to the city council earlier this month, Denver Sheriff’s Department’s Chief Vincent Line praised Aramark for how it treats its employees and said it focuses on “culinary excellence.” Line, who previously worked with Aramark during his 19 years at the Arapahoe County Sheriff’s Office, said he was unfamiliar with the widespread complaints about the company and had not personally seen any issues with its work.

“I certainly have confidence in our ability to oversee what is occurring with food service,” Line told The Denver Post. “I have no concerns moving forward.”

If the council approves the contract Monday night, the Philadelphia-based Aramark will serve an average of 1,380 inmates each day and handle the management and supervision of all facets of food service in the county jail and downtown detention center. The proposed contract requires Aramark to meet basic health standards and portion sizes, but it does not specify what actions can be taken by Denver officials or inmates if those requirements are not met.

Aramark has had problems in jails across the country. The Michigan Department of Corrections fined the company hundreds of thousands of dollars after reports that staff had improper contact with inmates, served rotten food crawling with maggots or food that had been thrown in the trash and gave inmates cake that had been partially eaten by rodents. State officials in Mississippi hired a different food vendor this year after reports that Aramark served rotten and spoiled meals.

Aramark did not return three days of requests for comment about its possible contract with Denver or its history at other places in Colorado and across the country.

“We are sentenced to jail not hunger,” one Jefferson County Jail inmate wrote in his 2020 lawsuit. A different inmate in the same jail also sued last year after he reportedly found metal shavings in a brownie that Aramark staff served him.

Jefferson County Sheriff’s Office spokesman Mike Taplin confirmed metal shavings had been found in food due to a broken machine in the kitchen. He also said that while inmates have complained about not receiving enough food, “Aramark has a nutritionist who puts the meals together and bases the meals on a 2,900-calorie-per-day amount.”

Health inspectors typically examine the jail’s food and kitchen twice a year but those inspections were suspended during the pandemic, Taplin said. The American Correctional Association and National Commission on Correctional Health Care also inspect the jail once every three years.

In a third lawsuit filed last year against Littleton, Arapahoe County and Aramark officials, among others, an Arapahoe County Detention Center inmate called the food served by Aramark “unfit for human consumption.”

Judges dismissed all three lawsuits and several others for technical reasons; the inmates had filed those lawsuits without the help of attorneys.

The Arapahoe County Sheriff’s Office has been doing business with Aramark for at least 15 years, said spokesman John Bartmann. The contract has been renewed every five years, because each time the work is put out to bid Aramark comes in as the low bidder.

Inmates complain about the food sometimes, Bartmann said, and when that happens the administration works directly with Aramark to solve whatever problem arose. However, he said there is no available documentation to verify those complaints or how they were resolved.

No “significant” concerns vs. lots of concerns

Line said he has no areas of “significant concern” with Aramark and noted that the company offers these services in 22 countries and to about 400 domestic clients.

In his experience, Line said inmates will occasionally complain about food regardless of the provider. Not only will someone within the sheriff’s department ensure that Aramark’s work is up to the city’s standards, but a third-party auditor will examine the company, he said.

During Line’s June 16 presentation to the city council, members asked Line about the cost of the agreement and other details — but not Aramark’s track record in jails and prisons across the country.

Councilman Kevin Flynn told The Post that city officials must closely examine reports surrounding Aramark’s poor performance before voting on the contract, and Councilman Paul Kashmann said he is researching the company.

A local criminal justice reform advocate, Apryl Alexander, said she saw Aramark’s work close up when she worked with kids in a juvenile detention center in Montgomery, Ala. The food quality was so poor that some kids refused to eat, said Alexander, who is also an associate professor of psychology at the University of Denver.

“It’s cheap and that’s why people are going for it,” she said. “It’s not humane, sustainable or nutritious.”

Alexander urged city officials to examine other options before signing with Aramark.

Denver civil rights attorney Jason Flores-Williams said his clients’ experience with Aramark across the country and in Jefferson County have been bad across the board. Some of those clients haven’t been convicted because of the pandemic, but they can’t afford bail either, so they’re eating Aramark food while being held, he said.

“They’re eating that Aramark food for over two years and you can noticeably see how these guys are becoming sick,” Flores-Williams said. It’s pretty grotesque.”