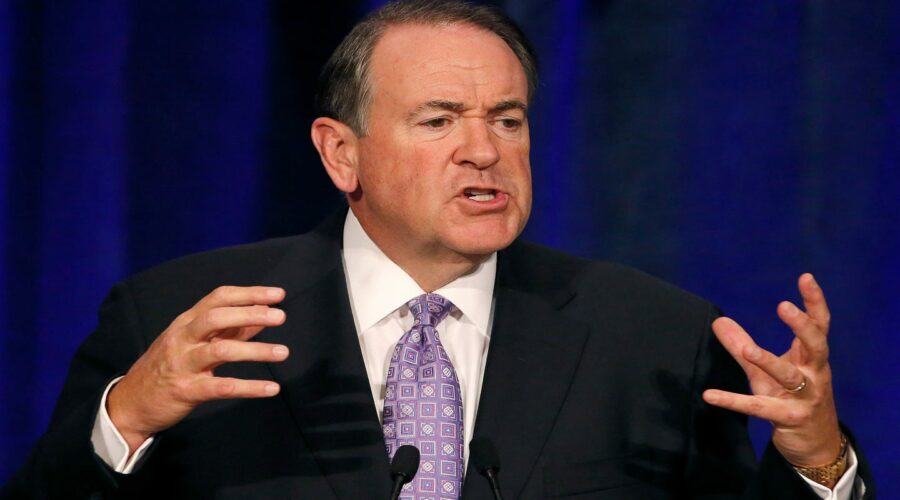 “I’ve decided to ‘identify’ as Chinese. Coke will like me, Delta will agree with my ‘values’ and I’ll probably get shoes from Nike & tickets to @MLB games. Ain’t America great?” Huckabee wrote.

Huckabee’s tweet, which he published amid a year of rising hate crimes against Asian Americans, was quickly condemned as racist, as many Asian Americans and anti-hate speech advocates have pointed to anti-Chinese rhetoric as a key driver in rising anti-Asian hate in the U.S.

Mike, I’ve shared a meal with you at your beautiful table. I’ve heard you profess Christ as Lord. This is entirely antithetical to the gospel.

Huckabee, a former Baptist pastor, responded to claims that he had violated Christian doctrine a day before Easter Sunday, saying “I don’t take Twitter or myself that seriously but I do take gospel seriously. I truly wish you only joy & continued blessings.”

Dear @SarahHuckabee: You defended the former President’s use of racist phrases like Kung Flu. Do you condone Mike Huckabee adding fuel to anti-Asian hate? Asking on behalf of Americans everywhere who drink Coke, fly Delta, wear Nikes and watch baseball.#StopAsianHatehttps://t.co/Zs9spYu9GL

Huckabee’s criticism was also part of a larger backlash against MLB after the professional sports league decided to move its All-Star Game from Atlanta in response to Georgia’s controversial new election law. Huckabee also echoed the conservative ire toward large businesses either headquartered or heavily invested in the Peach State – including Coca-Cola, Delta Airlines and Microsoft – that have openly opposed the law. Major financial institutions such as Citi and JPMorgan Chase have also expressed concern about the law.

Last month, the state’s Republican Legislature and governor passed a voting law that reduced voting access and added more stringent voting requirements. Critics claimed the law was the imposition of a “New Jim Crow” for its disproportionate impact on minority voters, while advocates defended the law’s provisions as necessary security measures.They also say the criticism is overblown and misrepresents the actual contents of the law.

Republican lawmakers in the state and across the country have consequently shot back at the firms and voting rights advocates. Many drew comparisons between corporate treatment of the situation in Georgia and many companies’ responses to human rights violations occurring in China.

“Dear GOP: @MLB caves to pressure & moves draft & #AllStarGame out of Georgia on the same week they announce a deal with a company backed by the genocidal Communist Party of #China,” Sen. Marco Rubio, R-Fla., said in a tweet responding to MLB’s decision.

“Why are we still listening to these woke corporate hypocrites on taxes, regulations & anti-trust?” the senator said.

“Hey @MLB, how many days of early voting are allowed in China?,” Sen Tom Cotton, R-Ark., asked in a tweet.

“Or are you just into hurting Atlanta small businesses that were planning on the all-star game? Americans are sick of this woke BS. @MLB is a disgrace.”

Georgia lawmakers have been fiercely divided over the issue with Democrats arguing that the decisions of MLB and major corporations are an unfortunate but justified response to an unjust law, while Republicans argue the decisions are unfounded.

“Just as elections have consequences, so do the actions of those who are elected. Unfortunately, the removal of the @MLB All-Star game from GA is likely the 1st of many dominoes to fall, until the unnecessary barriers put in place to restrict access to the ballot box are removed,” Atlanta Mayor Keisha Lance Bottoms, a Democrat, wrote on Twitter.

“Georgians – and all Americans – should fully understand what the MLB’s knee-jerk decision means: cancel culture and woke political activists are coming for every aspect of your life, sports included. If the left doesn’t agree with you, facts and the truth do not matter,” the governor claimed.

[email protected]: “It is my hope that businesses, athletes, and entertainers can protest this law not by leaving Georgia but by coming here and fighting voter suppression head on, and hand-in-hand with the community.” #gapolpic.twitter.com/N6Nqf3hVpW

“Businesses and organizations have great power in their voices and ability to push for change, and I respect the decision of the players to speak out against this unjust law,” Sen. Raphael Warnock, D-Ga., a fierce critic of the bill, said in a statement.

“It is my hope that businesses, athletes, and entertainers can protest this law not by leaving Georgia but by coming here and fighting voter suppression head on, and hand-in-hand with the community,” the senator continued.

The Atlanta Braves baseball team was “saddened” by the decision to move the All-Star Game, the organization said in a tweet, but said the Braves would “continue to stress the importance of equal voting opportunities” and that Atlanta has always “been known as a united in divided times and we will miss the opportunity to address issues that are important to our community.”