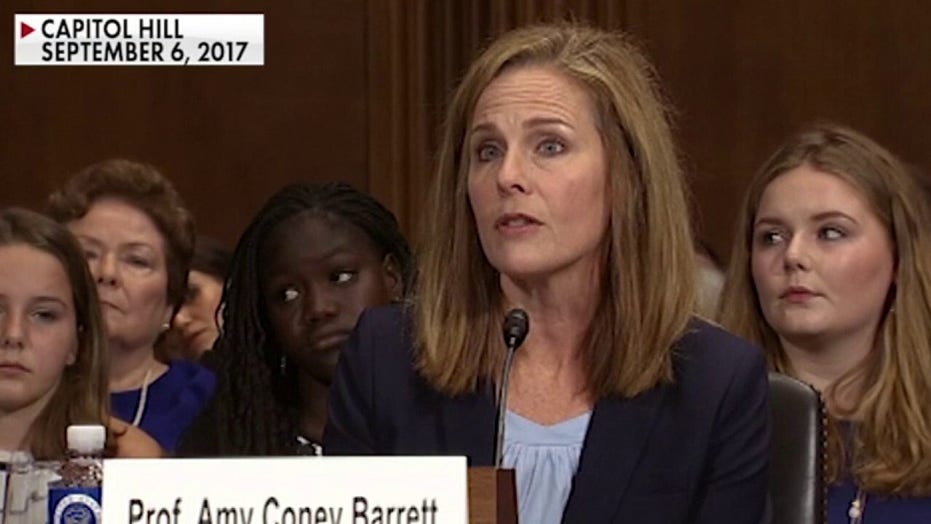 Friend of Amy Coney Barrett: She’s committed to the rule of law

Rick Garnett, friend and former co-worker of Amy Coney Barrett, previews what he expects to hear in her Senate confirmation hearings on ‘Fox &amp; Friends.’

Well, we finally have the answer of Joe Biden, Kamala Harris, top Democrats and their media notetakers on the great question of whether they plan to pack the Supreme Court. No, no, they’re not providing a good-faith response to the question. They are redefining their terms.

To borrow from page-one of  Today in Torturing the Text, by Bill Clinton, “It all depends on what the definition of packing is.”

In a flourish that would have greened George Orwell with envy, the media-Democrat complex now proclaims that Democrats are merely intent on depoliticizing thice Supreme Court because Republicans have been “packing” it for four years.

This, of course, turns on its head the commonsense, historical understanding of court-packing that has been universally accepted – and, indeed, invoked by such Democrats as [checks notes] Joe Biden – for decades.

JOHN YOO: IF SENATORS ATTACK AMY CONEY BARRETT'S FAITH, HERE'S THE REPLY SHE MUST GIVE

To “pack” the Supreme Court means to enact legislation to expand the size of the tribunal in order to achieve constitutionally dubious political outcomes that the Court’s legal rulings are frustrating.

The concept arises out of President Franklin D. Roosevelt’s threat to pack the Court because its decisions were invalidating New Deal legislation. This was during the Great Depression. Notwithstanding that FDR had won a historic landslide victory in 1936 and enjoyed super-majority Democratic support in Congress, his own party slapped his proposal down, forcing the 20th Century’s most powerful president to beat a hasty retreat.

That happened because Depression-era Democrats, unlike today’s Democrats, not only grasped but feared the implications.

Expanding the Court and filling the new slots with progressive ideological allies, as FDR intended to do, would irrevocably convert the non-political judiciary into a politicized super-legislature. It would eviscerate the rule of law, which courts are presumed to enforce without partisanship, substituting the ideological preferences – the brute political will – of the party that happened to be dominating the political branches at that point in time.

Those Democrats understood that times change. If they packed the Court, the Republicans at their next opportunity would expand the number of seats and array their own politically-driven lawyers in judicial robes.

The Court would have become a super-legislature. That would destroy the Court as an institution. The legitimacy of the tribunal’s rulings – the reason its decisions are accepted by the public as law – is that they are presumed to be driven by the remorseless logic of jurisprudence, not the wheeling-and-dealing of politics.

The destruction of the judiciary as a non-political institution would inexorably destroy our framework of government. The Constitution sets up a system based on separation-of-powers: The division of authority that prevents any actor in the system from accumulating too much power. The Framers, as students of Locke and Montesquieu, believed would lead to tyranny.

Among the system’s key checks and balances is the judiciary’s insulation from politics. This enables it to preserve the Constitution and statutes as written, pushing back against majoritarian political impulses that would otherwise overrun minority rights and individual liberty – our system’s ideal.

If the Supreme Court became a nakedly political institution, then it would be the tool of the majority party in power. In sum, it could no longer perform the function for which it was created: To serve as a bulwark between Americans and government oppression, protecting the former’s rights to free speech, worship, self-defense, property, privacy, due process and equal protection under the law.

To be clear, it is not packing the Court for the elected president and Senate to fill vacancies that arise under existing law.

As a matter of constitutional law, there are only two rules for filling a vacancy: The president must appoint, and the Senate must consent. Historically, when the presidency and Senate are controlled by the same party, the president’s nominees (assuming they are professionally and ethically qualified) get confirmed. If they are controlled by different parties, the Senate often does not consent and thus nominations are defeated.

Contrary to media-Democrat talking points, The Republicans have not packed the Court these last four years. They have controlled the filling of vacancies that arose in the tribunal, which has had nine members since 1869.

When Justice Antonin Scalia died in 2016, the last year of President Obama’s term, the White House and Senate were in control of different parties, and the Senate did not consent to Obama’s nominee, Merrick Garland. An election intervened, Donald Trump won the presidency, and with the same party now in control on both ends of Pennsylvania Avenue, the Senate consented to Trump’s nominees, Neil Gorsuch and Brett Kavanaugh, to fill, respectively, the vacancies caused by Justice Scalia’s death and Justice Anthony Kennedy’s retirement.

Justice Ruth Bader Ginsburg recently passed away while Trump was still president, which he will lawfully be until at least January 20; and while Republicans still controlled the Senate, which they will lawfully do until at least January 3. Trump has thus nominated the highly qualified Judge Amy Coney Barrett, and the Senate is poised to confirm her.

That is not “court-packing.” It is the Constitution in action.

And don’t kid yourself: If a Supreme Court justice had died a week – maybe even a day – before President Obama’s term ended, and if Democrats had controlled the Senate, they would have raced to fill the vacancy. They would have moved heaven and earth not to leave it for Republicans to fill. You know that as sure as you’re reading this.

There is nothing magic about the number nine. The Constitution makes Congress the master of the Supreme Court’s size. It started out with six members after the Judiciary Act of 1789. Over the next 80 years, the number varied between five and ten justices. Since 1868, it has been set at nine. That has proved a prudent number for resolving tough issues while making sure all legitimate legal positions are effectively considered.

It was one thing to vary the Court’s size when the nation was growing, the Court’s role was evolving, and the work of the federal judiciary was expanding. As FDR found, however, it would be a very different thing, a ruinous thing, to expand the court to achieve political outcomes.

That would not only destroy the Court as an institution; it could be a mortal blow to our constitutional system.

12/10/2020 Politics Comments Off on Andrew McCarthy: No, Joe Biden, it is not packing the Court for the president and Senate to fill vacancies
World News

Who is Frank Bough's wife Nesta Howells and did they have any children?

Who is Frank Bough's wife Nesta Howells and did they have any children?