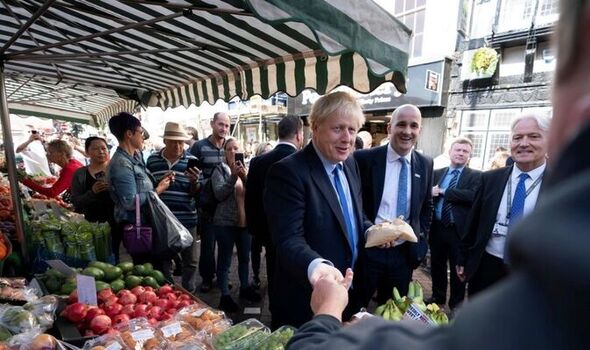 The “common sense” move has been backed by Tory MPs as taking advantage of Brexit freedoms and an apparent attempt to garner support among Brexiteers amid fallout from the Sue Gray report.

Currently, the UK uses a mix of imperial and metric measurements but the Prime Minister is expected to announce next week that British shops could now sell products in pounds and ounces.

The announcement is set to coincide with Jubilee celebrations for the monarch’s 70th year on the throne.

EU rules state that all goods sold in Europe have to display metric weights and measurements and traders are legally required to use metric units for the sale by weight or measure of fresh produce.

While it was still legal to price goods in pounds and ounces, these had to be displayed alongside the price in grams and kilograms.

On Friday, the Government are expected to publish proposals to repeal the law.

Meanwhile, ministers are also planning to restore the crown symbol on pint glasses after EU rules required the use of an EU-wide ‘CE’ mark on the glasses.

However, the European Commission rejected the idea that EU rules ever stopped the Government from printing the crown stamp on glasses.

Speaking about the restoring of imperial measurements, a Government spokesperson said: “We Brits measure our walks in miles and our beer and milk by the pint. And nobody knows what a 4.5kg baby looks like, but we all know a 10-pounder is a whopper.

“It’s time we held our heads high about our long history of traditional measures.

“And what better way to celebrate Her Majesty’s Platinum Jubilee than restoring the crown emblem back onto the side of pint glasses so that we can toast her health and service to this country.”

The Government’s proposal will review the advantages of reintroducing imperial measurements for both customers and businesses.

There is understood to be a number of possible options but it is unlikely that metric measurements will the scrapped completely, according to a Government source.

The decision is more likely to see traders making their own choice on whether they wish to sell goods in pounds and ounces, similar to how pubs sell pints of beer.

Only three other countries – the US, Myanmar and Liberia – are believed to use the imperial measurement system on a daily basis.

With the US being one of the UK’s biggest trading partners, Mr Bone said: “I welcome the move. We had the nonsense of traders being charged for not using metric measurements”.

David Jones, the deputy chairman of the European Research Group of MPs, said: “The British people have never really warmed to metric measurements. They still buy pints in pubs and measure speed in miles per hour.

“There is no reason at all why they should not be able to buy a pound of apples if they wish to do so.”

29/05/2022 Politics Comments Off on ‘All know 10-pounder is a whopper!’ Imperial measurements face shop return in Brexit move
Markets