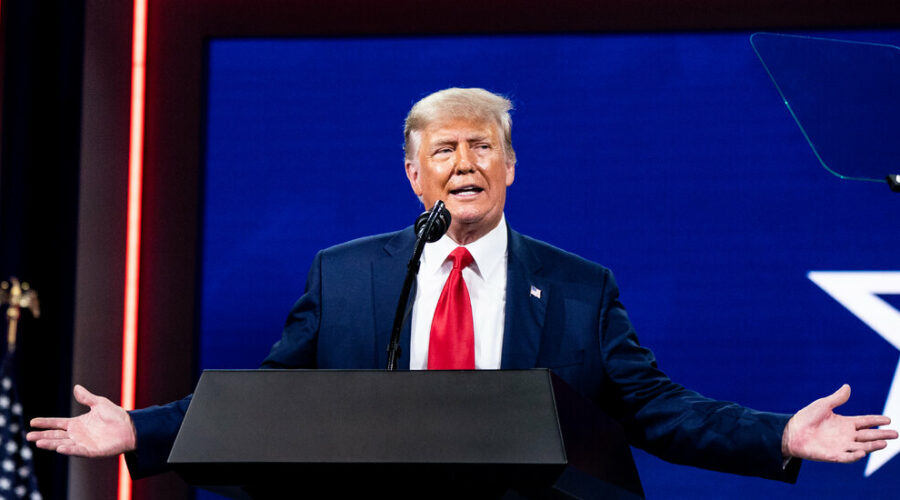 The first spring donor retreat after a defeat for a political party is typically a moment of reflection and renewal as officials chart a new direction forward.

But with former President Donald J. Trump determined to keep his grip on the Republican Party and the party’s base as adhered to him as ever, the coming together of the Republican National Committee’s top donors in South Florida this weekend is less a moment of reset and more a reminder of the continuing tensions and schisms roiling the G.O.P.

The same former president who last month sent the R.N.C. a cease-and-desist letter demanding they stop using his likeness to raise money will on Saturday evening serve as the party’s fund-raising headliner.

“A tremendous complication” was how Fred Zeidman, a veteran Republican fund-raiser in Texas, described Mr. Trump’s lingering presence on the political scene.

The delicate dance between Mr. Trump and the party — after losing the House, the Senate and the White House on his watch — will manifest in some actual shuttle bus diplomacy on Saturday, as the party’s top donors attend a series of receptions and panels at the Four Seasons Resort before traveling to Mar-a-Lago, the former president’s private club, to hear Mr. Trump speak.

Mr. Trump’s insistence on leading the party “affects every member,” Mr. Zeidman said, as lawmakers and would-be elected officials jockey for a Trump endorsement that is as powerful in a Republican primary as it can be problematic in a general election.

“He’s already proven that he wants to have a major say or keep control of the party, and he’s already shown every sign that he’s going to primary everybody that has not been supportive of him,” Mr. Zeidman said. “He complicates everything so much.”

Among other things, Mr. Trump is considering running again in 2024. Though few of his allies believe he will follow through, his presence could have a chilling effect on other potential candidates.

“The party is still very much revolving around” Mr. Trump, said Andrea Catsimatidis, chairwoman of the Manhattan Republican Party and a donor who will be at the retreat. “He was the one who very much revived the party when we weren’t winning.”

Also inescapable is the fact that Mr. Trump has quickly built a political war chest that rivals that of the R.N.C. An adviser to Mr. Trump said he currently had about $85 million on hand, compared with nearly $84 million for the R.N.C.

“Send your donation to Save America PAC,” Mr. Trump urged supporters last month, not to “RINOS,” the derisive acronym for “Republicans in Name Only.” Mr. Trump has appeared as passionate about punishing Republicans who crossed him, especially those who supported his second impeachment, as he has about taking back the House and Senate in 2022.

For party officials, the goal is keeping the energy that has propelled Mr. Trump to success inside the Republican tent while not entirely allowing the former president to dominate it. Ronna McDaniel, the R.N.C. chairwoman whom Mr. Trump supported for a second term, has vowed to remain neutral in a potential 2024 primary should Mr. Trump run again.

“It is a difficult balancing act,” said Bill Palatucci, a Republican National Committeeman from New Jersey who has been critical of Mr. Trump.

“The president certainly has devoted followers,” Mr. Palatucci said, “but he also more than offended a lot of people with his conduct since the November election, which culminated in his helping to incite the riot on Jan. 6.” 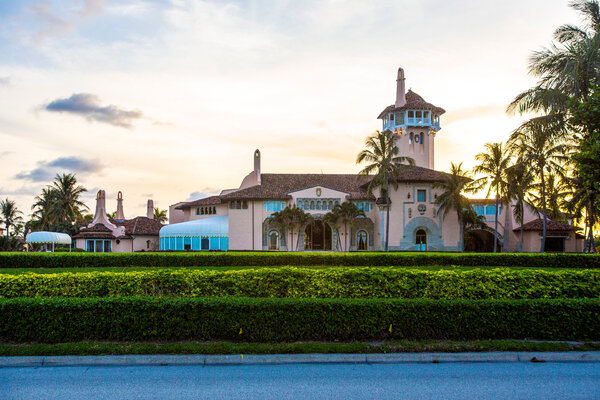 Several Republicans who are considered likely to run for president in 2024 — including Senator Tom Cotton of Arkansas, Gov. Ron DeSantis of Florida and Gov. Kristi Noem of South Dakota — were scheduled to speak to the R.N.C.’s donors at the Four Seasons. Mike Pompeo, the former secretary of state and C.I.A. director who served under Mr. Trump, had been scheduled to speak on Friday but did not attend the gathering.

Some donors are hoping to quickly move past Mr. Trump, but they are also focused on the current Oval Office occupant.

“It is very important the Republican Party puts Donald Trump as far into the past as possible,” said William Oberndorf, an investor in California who has given millions to G.O.P. candidates but fiercely opposes the former president.

“However, if Joe Biden does not ensure that major pieces of legislation have bipartisan support, it is he who will bear more responsibility than any group of Republican donors ever could for resurrecting Mr. Trump’s political future and fortunes,” he added.

Among donors, the jockeying for favor and financing extends beyond Mr. Trump and the R.N.C.

On Thursday and Friday, a separate but overlapping gathering for Republican contributors was held at Mr. Trump’s private club: an “investors meeting” of the Conservative Partnership Institute (C.P.I.), a nonprofit organization. Mark Meadows, who served as Mr. Trump’s chief of staff, is now a senior adviser for the group, and Caroline Wren, who used to fund-raise for the former president, is raising money for it.

Donors are being pitched on a dizzying array of Trump-adjacent projects, including Mr. Pence’s group and new entities being started by Ben Carson, Mr. Trump’s former housing secretary; Stephen Miller, his former White House adviser; and Russell Vought, the former director of the Office of Management and Budget.

Corey Lewandowski, Mr. Trump’s first campaign manager in 2016, is said to be involved with efforts to start a Trump-aligned super PAC, as well.

Mr. Trump, who continues to talk privately about a future campaign of his own in 2024, spoke to donors for the Meadows-linked group for more than an hour on Thursday, also at his private club.

“All Republican roads lead to Mar-a-Lago,” said Jason Miller, an adviser to Mr. Trump. “Trump is still the straw that stirs the news cycle. His influence will be central to every speech and story line this week.”

Those who have trekked there to meet Mr. Trump in recent months include Sarah Huckabee Sanders, his former press secretary and a candidate for governor of Arkansas; Senator Rick Scott of Florida, the chairman of the National Republican Senatorial Committee; and Representative Kevin McCarthy, Republican of California and the House minority leader.

The R.N.C. had initially planned for its entire retreat to be held nearby in Palm Beach, but organizers moved the final Saturday evening events to Mr. Trump’s resort, meaning the party will again be paying the former president’s private club to use its space.

During Mr. Trump’s White House tenure, his political campaign, the R.N.C. and his allies spent millions of dollars at Trump businesses, including his hotel in Washington near the White House and a resort property in Miami, where yet another pro-Trump group also held a conference this week.

Party officials maintained that donors and a number of party activists were happier being at Trump-branded properties than they were anywhere else.

Still, the Trump branding of official Republican events had alienated what was once the Republican establishment.

“This is all about the Trump circle of grift,” said former Representative Barbara Comstock of Virginia, who is close to another high-profile Republican — and a frequent target of Mr. Trump’s — who was also notably absent: Representative Liz Cheney of Wyoming.

Ms. Comstock said that the Republicans keeping their distance were wise to “build their own coalitions” and “not get sucked into Trumpism, which has a limited and short-term appeal with demographics dying in this country.”

Henry Barbour, an influential R.N.C. member from Mississippi, said that the party was still in a transitional phase since Mr. Trump’s loss.

“When you lose the White House, you kind of figure it’s going to take a little bit of healing, and I think probably first quarter has hopefully got us moving on a better path,” Mr. Barbour said. Mr. Trump, he said, is a “big force in the party, but the party is bigger than any one candidate including Donald Trump.”

With Mr. Trump’s priorities differing from those of other party leaders, the tension remains palpable. On Friday, the super PAC for Senate Republicans, which is aligned with Senator Mitch McConnell of Kentucky, announced its backing of Senator Lisa Murkowski, Republican of Alaska, who infuriated Mr. Trump by voting to impeach him. (Some Trump 2020 advisers are working for Ms. Murkowski’s Republican challenger, Kelly Tshibaka.)

Last month, Mr. McConnell privately boasted of the super PAC’s fund-raising in a meeting with Senate Republicans, bragging that it had raised more than Mr. Trump’s super PAC had in 2020. He even distributed a card to hammer home the point: “In three cycles: nearly $1 billion,” the card said. Below that were Mr. Trump’s super PAC statistics: “Trump: $148+ million,” referring to the group America First.

But the Republican small donor base remains very much enamored with Mr. Trump.