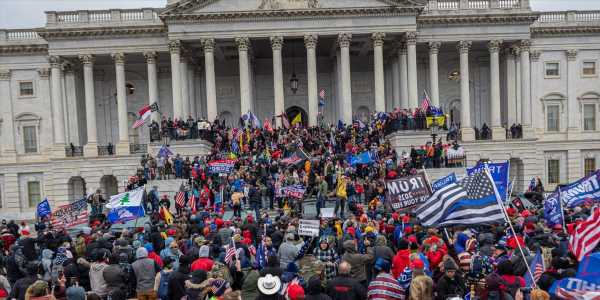 The day before pro-Trump rioters stormed the US Capitol building, people received an encouraging phone call from a group of Republican attorneys general telling them to "march," NBC News reported.

The group — the Republican Attorney General Association — is made up of some of the nation's highest-ranking law enforcement and legal officers.

Its fundraising arm, the Rule of Law Defense Fund, disseminated robocalls to people urging them to head to the Capitol on January 6, according to NBC News.

"At 1 p.m., we will march to the Capitol building and call on Congress to stop the steal," a voice on the call said, NBC reported.

There was no direction in the call to storm the Capitol building, according to NBC News. Violence was also not advocated.

The Rule of Law Defense Fund is closely tied to the Republican Attorney General Association, NBC News reported. The two share offices and funding. Staff members collaborate and work on the same projects.

Steve Marshall, the Alabama attorney general who is in charge of the arm, said he was unaware these calls went out.

"I was unaware of unauthorized decisions made by RLDF staff with regard to this week's rally," Marshall said in a statement to NBC News. "Despite currently transitioning into my role as the newly elected chairman of RLDF, it is unacceptable that I was neither consulted about nor informed of those decisions. I have directed an internal review of this matter."

The Republican Attorney General Association did not immediately return a request for comment from Business Insider.

The riot, which began after President Donald Trump encouraged his supporters to protest the results of the election, has been characterized as an attempted coup. Rioters stormed the Capitol building as lawmakers were meeting inside to certify the results of the 2020 presidential election.

Five people, including one police officer, died. Members of the Proud Boys, which is classified as a hate group by the Southern Poverty Law Center, were reportedly present at the Washington, DC, riot.

Many lawmakers began to shelter in place upon notice that the riot broke out. Many evacuated the Capitol building. A quick-thinking Senate aide secured the boxes containing the electoral votes, rescuing them from possible damage.

The vote to certify President-elect Joe Biden went on as planned hours after the riot ended.

A day after the riot, Trump said there would be "an orderly transition" on January 20, Inauguration Day.

The riot spurred calls to once again impeach Trump, this time on a charge for "incitement of an insurrection." Senate Majority Leader Mitch McConnell circulated a memo to Republicans saying Trump cannot logistically be removed from office before Inauguration Day.

22/01/2021 Politics Comments Off on A day before the riot at the Capitol, people received a call from a group of Republican attorneys general urging them to 'march:' report
Markets