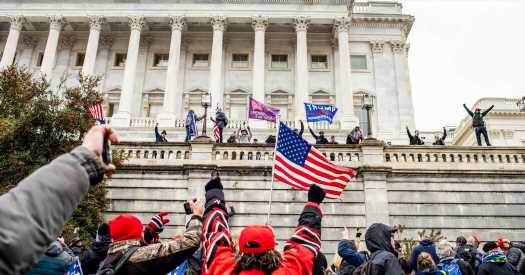 Federal prosecutors filed a wide-ranging conspiracy indictment on Thursday accusing six California men said to be connected to a radical gun rights movement called the Three Percenters with plotting to assault the Capitol on Jan. 6, in the first charges lodged against anyone involved with planning any of the political events held the week of the attack.

The 20-page indictment was also the first to be brought against a group of alleged Three Percenters, a loosely organized movement that takes its name from the supposed 3 percent of the U.S. colonial population that fought against the British. The new charges, filed in Federal District Court in Washington, came on the same day that Christopher A. Wray, the F.B.I. director, testified in front a House committee that prosecutors were pursuing additional conspiracy charges against some of the rioters who stormed the Capitol.

Investigators have said for months that several extremist groups were involved in the attack, but while the Three Percenters have been occasionally mentioned in court filings, most accused extremists have come from two other groups: the Oath Keepers militia and the far-right nationalist group the Proud Boys. The new charges could suggest that prosecutors have started to pay attention not only to those who directly took part in the Capitol attack, but also to those who helped foment the assault. 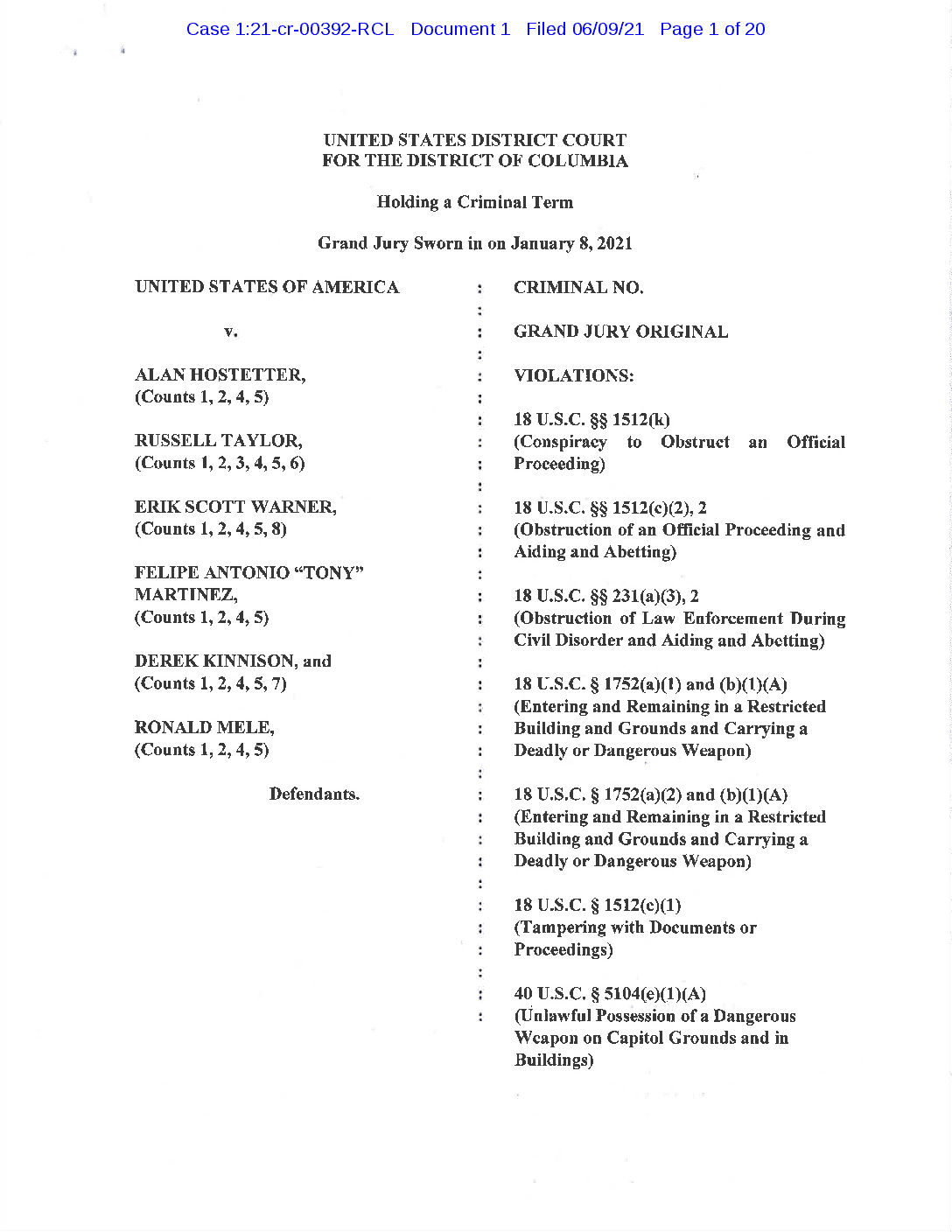 The two top defendants in the indictment — Alan Hostetter, 56, a former police chief turned yoga instructor; and Russell Taylor, 40, a wealthy graphic designer with a taste for red Corvettes — were already under scrutiny by the government after the F.B.I. raided their homes in January. Mr. Hostetter and Mr. Taylor were leaders of a group called the American Phoenix Project, which was founded to fight the “fear-based tyranny” of coronavirus-related restrictions. The group later embraced former President Donald J. Trump’s lies about a stolen election, and helped organize a well-attended rally outside the Supreme Court on Jan. 5, where the speakers included Roger J. Stone Jr., a former adviser to Mr. Trump.

Mr. Hostetter’s wife, Kristine, a schoolteacher, also attracted national attention this year after she attended “Stop the Steal” rallies in Washington, setting off a furor in their hometown, San Clemente, Calif., that prompted an investigation by the school board into whether she had attacked the Capitol. She was cleared by the district in March.

Yet despite the attention from law enforcement, the news media and neighbors in Orange County, neither Mr. Hostetter nor Mr. Taylor had been publicly linked to the Three Percenters before they were charged on Thursday. 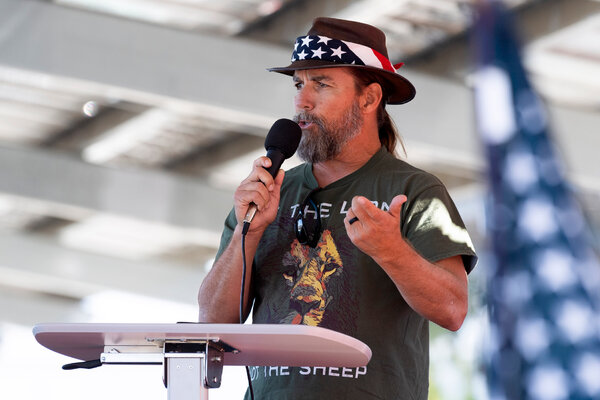 Starting shortly after the election, the indictment said, Mr. Hostetter used the American Phoenix Project “to advocate violence against certain groups and individuals that supported the 2020 election results.” At the end of November, for example, he posted a video on the group’s YouTube channel in which he accused those who had not challenged the results of committing treason. “Some people at the highest level,” he said, “need to be made an example of with an execution or three.”

The following month, at a rally in Huntington Beach, Calif., Mr. Hostetter gave a speech repeating his death threats against those who doubted Mr. Trump had won. “Execution is the just punishment of the ringleaders of this coup,” the indictment quotes him as saying.

To plan their role in the Capitol attack, prosecutors say that Mr. Hostetter, Mr. Taylor and some of their co-defendants — among them, Derek Kinnison, 39, Felipe Antonio Martinez, 47, and Erik Warner, 45 — used text messages, Facebook and the chatting app Telegram. More than 30 people, the indictment notes, joined a Telegram group chat called “California Patriots-DC Brigade,” a channel that Mr. Taylor described as being for “able bodied individuals that are going to DC on Jan. 6” and are “ready and willing to fight.”

On Jan. 1, prosecutors say, Mr. Taylor sent out a message on the group chat asking its members to reveal whether they had any military or law-enforcement training. “I am assuming,” he wrote, “that you have some type of weaponry that you are bringing with you.”

That same day, in his introductory post to the group chat, Mr. Kinnison wrote that he, Mr. Martinez and Mr. Warner were part of “so cal 3%,” according to the indictment. Prosecutors say Mr. Kinnison attached a photo to the Telegram message of the three men flashing a Three Percenter hand signal.

The connection of Mr. Hostetter and Mr. Taylor to the Three Percenters seemed somewhat more tenuous. On Jan. 3, the indictment says, Mr. Hostetter posted a message on the American Phoenix Project’s Instagram account using language associated with the movement. “Only 3% of Americans actually fought in our War of Revolution,” he wrote. “There will likely be 3% of us again that will fully commit to this battle.”

Mr. Taylor’s lawyer, Dyke Huish, said he had no knowledge of any involvement by his client with the Three Percenters. “That is something I have never heard of,” he added, “even remotely.”

Mr. Hostetter and Mr. Taylor emerged last year as rising star’s in Southern California’s resurgent far fight. Both appear to have been radicalized at the onset of the pandemic, and have helped lead a new generation of right-wing extremists to come out of the beach towns of Orange County, where Richard M. Nixon turned an oceanside villa into his presidential getaway, and John Wayne kept his yacht, Wild Goose.

The area was a cradle of the modern American conservative movement and some of its most virulently racist, anti-Semitic and paranoid offshoots, such as the John Birch Society in the 1960s and neo-Nazi and skinhead groups who flocked to its surf spots two decades later.

Until last year, Mr. Hostetter seemed very distant from that history. A former soldier and police chief, he landed in San Clemente nearly a decade ago and embarked on a third career as a yoga guru who specialized in “sound healing” with gongs, Tibetan bowls and Aboriginal didgeridoos. He was conservative, according to people who know him, but no more so than many others in and around San Clemente.

Then came the pandemic. He quit yoga, declared himself a “patriotic warrior” and founded the American Phoenix Project. The group began organizing protests, and soon attracted Mr. Taylor. Their list of enemies quickly grew to include Black Lives Matter protesters, and Mr. Hostetter at times appeared to embrace QAnon, the conspiratorial movement that falsely claims Mr. Trump was secretly battling devil-worshiping Democrats and international financiers who abuse children.

Prosecutors say Mr. Kinnison and his Three Percenter partners were open about their affiliation with the movement and apparently made plans to bring firearms to Washington on Jan. 6. On Jan. 2, Mr. Kinnison sent a text message to Mr. Warner, Mr. Martinez and another co-defendant, Ronald Mele, 51, containing a photo that showed him wearing a bandoleer of shotgun ammunition, according to the indictment.

After Mr. Taylor spoke at the Supreme Court rally on Jan. 5 — “I am Russell Taylor and I am a free American” — prosecutors say he posted a video on an encrypted chatting app that showed an array of gear on a bed: a bulletproof vest, two hatchets, a walkie-talkie, a stun baton and a knife. The caption read, “Now getting ready for tomorrow.”

Decked out in this equipment, the indictment says, Mr. Taylor marched from Mr. Trump’s speech on Jan. 6 to the Capitol with Mr. Hostetter and someone identified only as Person One. Mr. Kinnison and his group of Three Percenters, prosecutors say, approached the building separately and, at least one of them — Mr. Warner — entered through a broken window.

Prosecutors do not accuse Mr. Hostetter or Mr. Taylor of breaking into the Capitol, though they do allege that both men joined a mob of rioters at the building’s lower west terrace who pushed through a line of law enforcement officers.

“I was pushing through traitors all day today,” Mr. Taylor wrote on a Telegram chat at 6:18 that evening, prosecutors say. “WE STORMED THE CAPITOL! Freedom was fully demonstrated today!”