The President of the European Commission took to the stage alongside Irish Prime Minister Leo Varadkar, EU chief Brexit negotiator Michel Barnier and European Council President Donald Tusk after the EU formally approved Boris Johnson’s Brexit deal. At the EU summit in Brussels Mr Juncker and Mr Tusk were asked ‘what is your message to the 48 percent of British voters who voted to remain in the EU and are still, some of them campaigning to cancel Brexit?’. An uncomfortable Mr Tusk said: “My opinion is I have to agree that it was only 48 and not 52.” 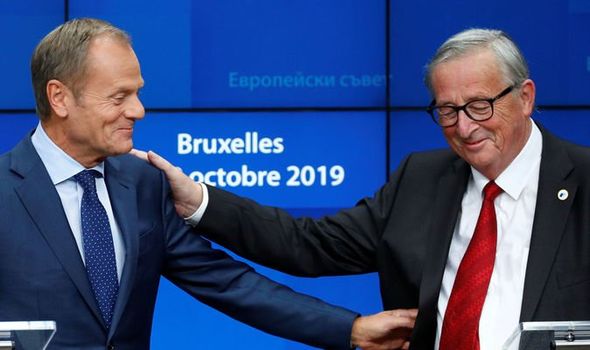 Then Mr Juncker interjected and threw his support behind Remainers, Mr Juncker said: “I would like to say to the 48 that they were right.”

The room in Brussels then erupted into laughter, with Mr Tusk and Mr Varadkar grinning from ear-to-ear struggling to hold back their amusement.

Mr Juncker then proceed to pat Mr Tusk on the shoulder.

Mr Tusk said the deal finalised by the Prime Minster had been “positively assessed” and would “avoid chaos” and “ensure integrity” of the single market.

However the EU chief threw more hope towards Remainers by insisting “our door will always be open”.

The European Council President said: “The new version of the deal has been positively assessed by Ireland. I have said from the beginning that we would always stand behind Ireland and not force a deal unfavourable to Dublin.

“Secondly the deal has been positively assessed by the European Commission. This gives us certainty that it is favourable and safe for the citizens of the European Union.

“The key change in comparison of the earlier version of the deal is Prime Minister Johnson’s acceptance to have customs checks at the point of entry into Northern Ireland. This compromise will allow us to avoid border checks between Ireland and Northern Ireland and will ensure the integrity of the single market.”

This is a developing news story, more to follow.