Although he retired from “The Daily Show” in 2015, Jon Stewart has been keeping busy with a number of unexpected appearances.

He’s defended his former colleagues, called out the media and President Donald Trump, saved a couple of wayward goats, questioned a pony, and entered the ring with John Cena.

Here’s what he’s been up to since he left television.

Last week, Stewart ripped into congressional lawmakers over their lack of support for 9/11 first responders. 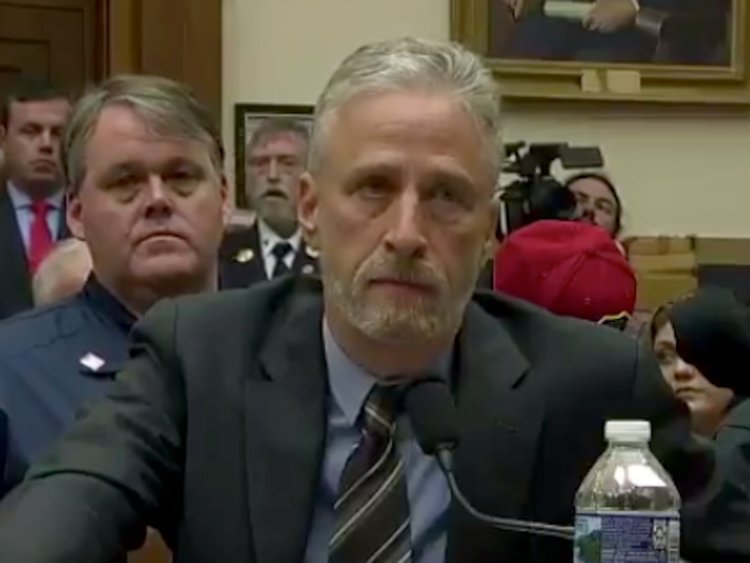 On June 11,Stewart ripped into congressional lawmakers over their failure to ensure that funds to pay for 9/11 first responders’ healthcare don’t run out.

Stewart excoriated lawmakers for their low attendance at a House Judiciary Committee hearing on the 9/11 Victims Compensation Fund, which he’s beenlobbying to make permanent for years.

He mocked Republican Sen. Mitch McConnell of Kentucky for saying he was “bent out of shape.” 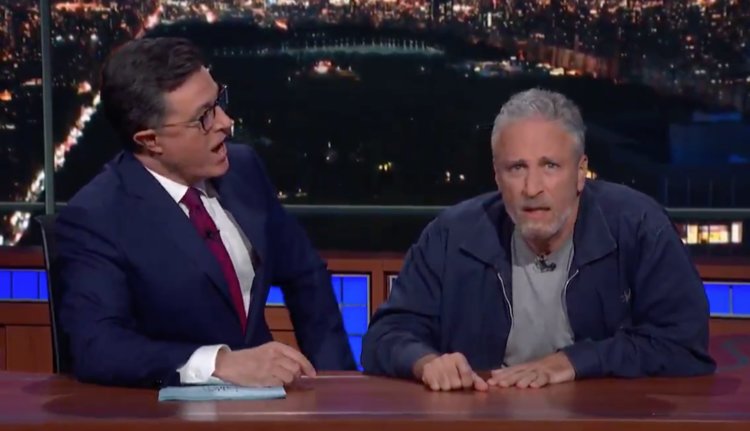 During avisit to “The Late Show with Stephen Colbert” on June 18, Stewart balked at McConnell’s suggestion that he was “bent out of shape” and delivered a scathing monologue at the expense of the senator, Business Insider’s David Choi reported.

Stewart went on a tirade against McConnell and other lawmakers, much like his signature comedic monologues from his 15 years of hosting “The Daily Show.”

“I feel like an ass—-. Now I feel stupid. This is a huge misunderstanding,” Stewart said. “I didn’t know that they were busy. Now I don’t even know what to say. I didn’t mean to interrupt them with their jobs!” 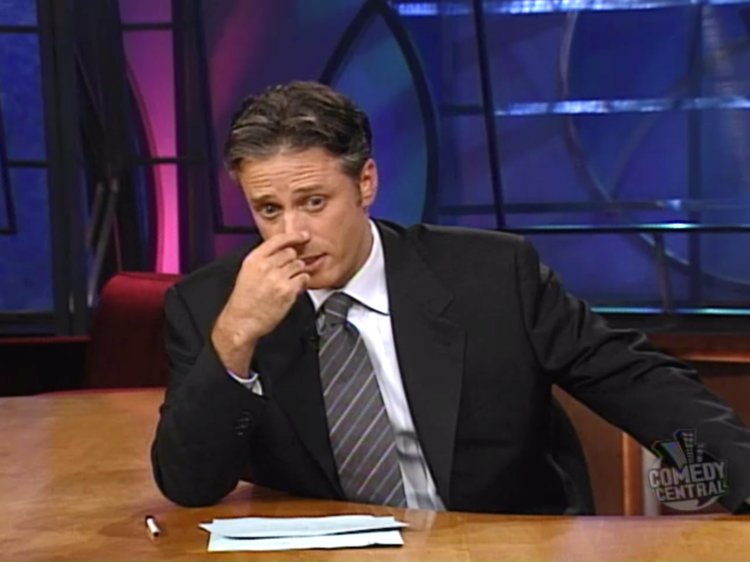 This might have been during his tenure on “The Daily Show”, butthe clip went viral again as Stewart made headlines for his 9/11 first responders work.

On the first episode since the September 11 attacks when the nation was still reeling, Stewart was overwhelmed with emotion during his opening monologue. A lifelong New Yorker, Stewart also filmed the show in New York City.

“They said to get back to work,”he said. “And there were no jobs for a man in the fetal position, under his desk crying, which I gladly would’ve taken. So, I come back here.”

In October 2018, he sat down with CNN to talk about how Trump had been successful in baiting the press. 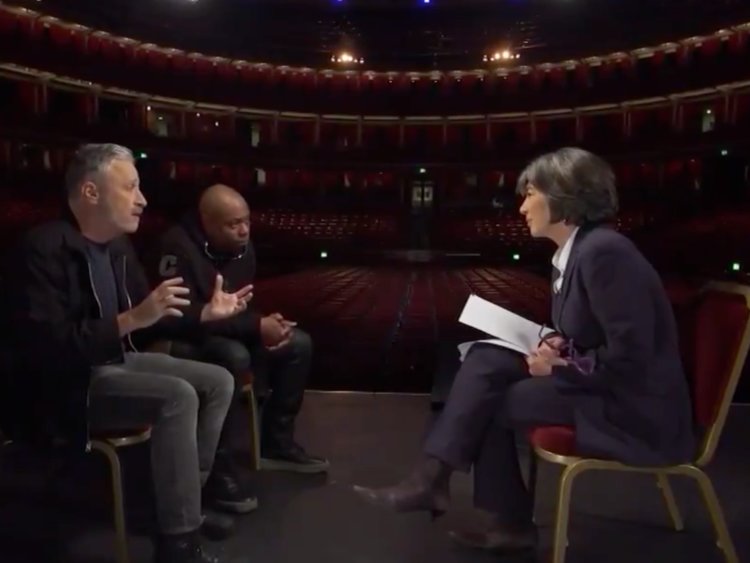 Stewart said Trump was baiting the media by attacking it, distracting from the impact of his policies,Business Insider’s John Haltiwanger reported.

When Trump attacks the press by calling it the “enemy of the people,” for example, Stewart said the media responds by standing up and saying, “We are noble. We are honorable. How dare you, sir!”

In August 2018, he managed to help rescue two goats that wandered onto subway tracks in Brooklyn. 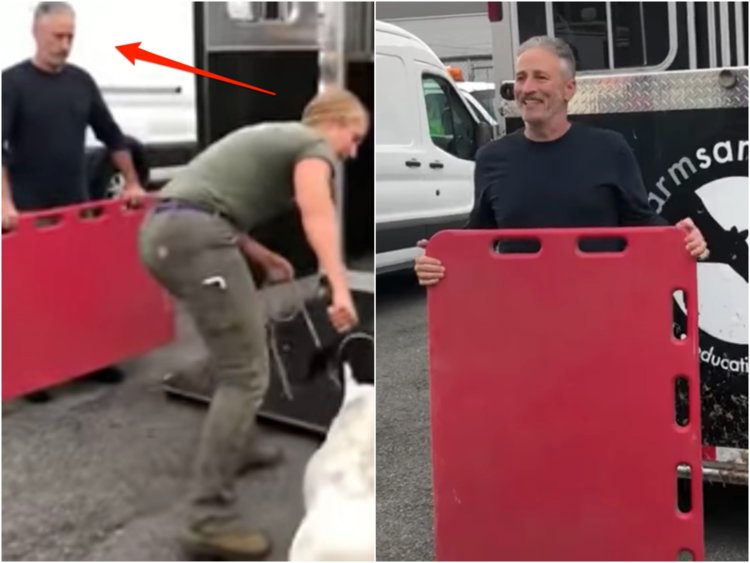 The two male goats, named Willy and Billy, brought traffic on the N-line to a standstill for two hours as NYPD and transit officers gave chase.

After the goats were sedated, Stewart took them to a farm upstate.

In June 2018, he defended Samantha Bee after Trump suggested she should get fired for calling Ivanka a “c—.” 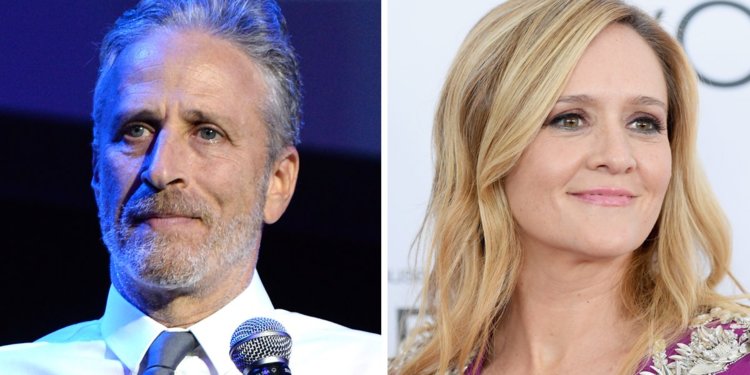 Stewart defended his former “Daily Show” colleague in a question-and-answer session at the Clusterfest comedy festival after Trump said Bee should be fired for calling his daughter and White House adviser Ivanka Trump a “c—“, Business Insider’s John Lynch reported.

Bee had apologized for her remarks. She used the term during a segment on her show “Full Frontal,” urging the president’s daughter to “do something” about her father’s “zero tolerance” immigration policy that had separated thousands of migrant children from their parents.

“Please understand that a lot of what the right does, and it’s maybe their greatest genius, is they’ve created a code of conduct that they police, that they themselves don’t have to, in any way, abide,” Stewart said,according to The Daily Beast.

In 2017, Stewart hosted a telethon on HBO to raise money for NEXT for Autism. 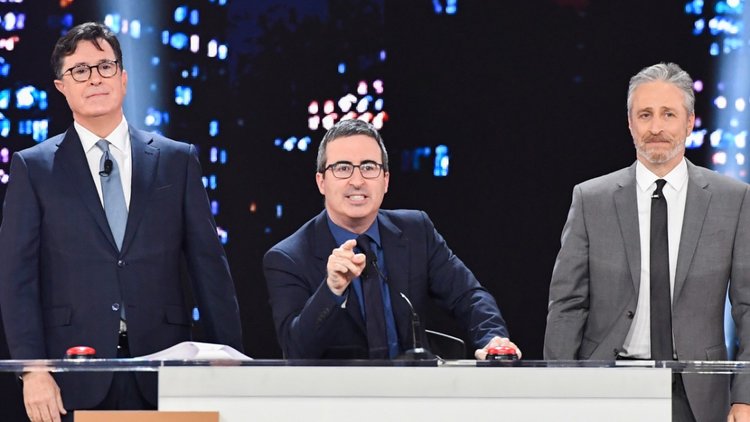 He hosted the ” Night of Too Many Stars: America Unites for Autism Programs”, with appearances from Chris Rock, J.J. Abrams, Adam Sandler, Ben Stiller, and more.

In 2017, he dressed up for a surprise appearance on “The Late Show with Stephen Colbert.” 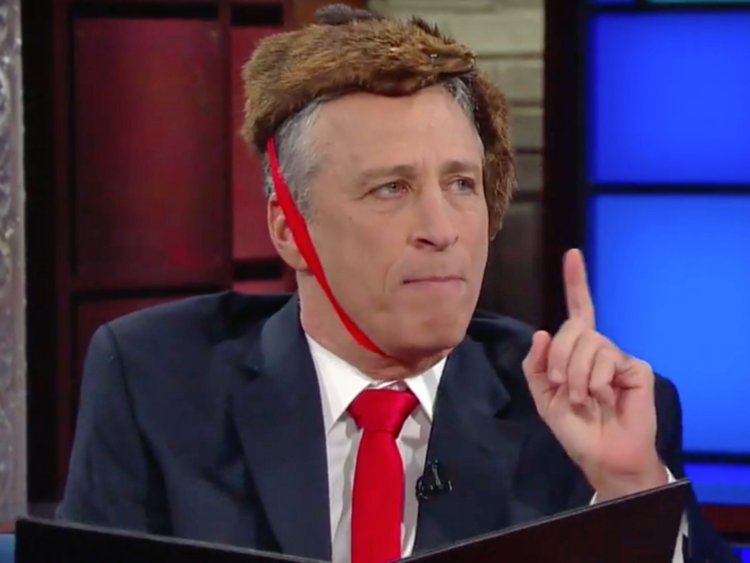 InStewart’s first appearance on late night television since President Donald Trump was elected, he came on wearing a long red tie and a ferret-like hairpiece on his head, Business Insider’s Jason Guerrasio reported.

The main reason he said he came on the show was that he had some of Trump’s executive orders ready to sign.

The first was to “to secure our border China shall immediately and without hesitation send us their wall.”

And he said America now finally had an official language.

“The official language of the United States is bull—-,” he said. “And none of that, ‘Sure I’ll speak bull—- at work but at home I’m going to use facts and real information.’ No, bull—- all the time, immersion, it’s the only way to be fluent.”

He also said having only been in office 11 days, Trump was “exhausting”.

He returned to the “Late Show” in February 2017 without the outfit to give the media a stern talking-to. 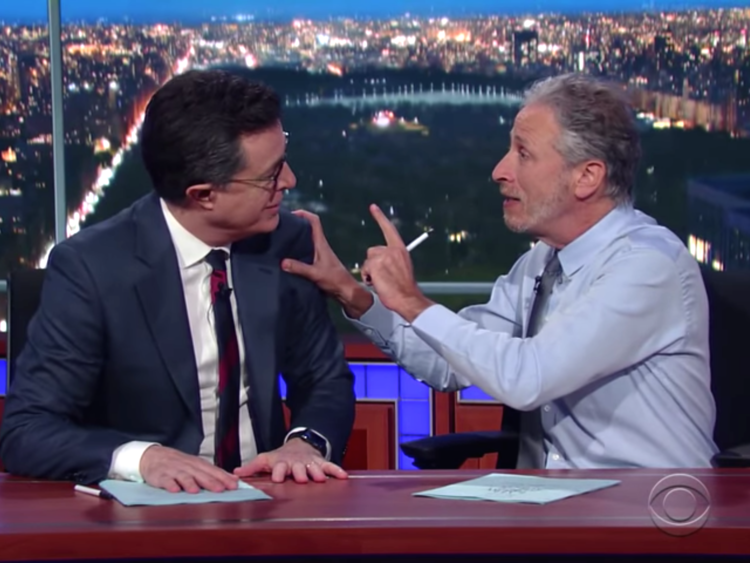 Stewart returned to “The Late Show”, where he’s an executive producer, because he couldn’t hold in his thoughts about Trump and the media any longer.

“Hey guys, hey media,” Stewart said. “So I heard Donald Trump broke up with you. Stings a little, doesn’t it? You finally thought you’d met your match — a blabbermouth who’s as thin-skinned and narcissistic as you are. Well, now it’s over. Well, good riddance, I say. Kick him to the curb. It is time for you to get your groove back, media.”

He made an appearance in an epic “Daily Show” reunion in 2017. 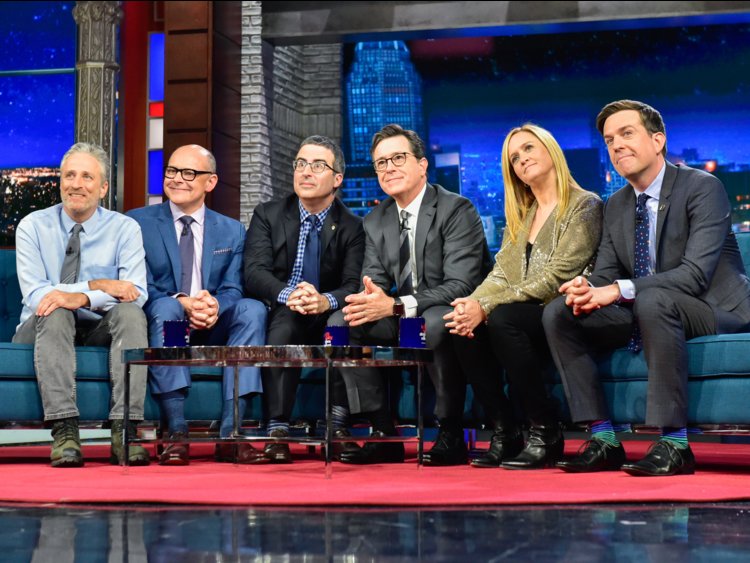 Stewart turned up for a more celebratory affair when Colbert assembled an elite group of “Daily Show” alumni to walk down memory lane and weigh in on current events,INSIDER’s Jethro Nededog reported.

“This really does look like a group of students coming back to see Mr. Holland,” Stewart said. “It’s the end, and I’ve done it all.”

He had plans for an animation series with HBO, but it was canceled in 2017. 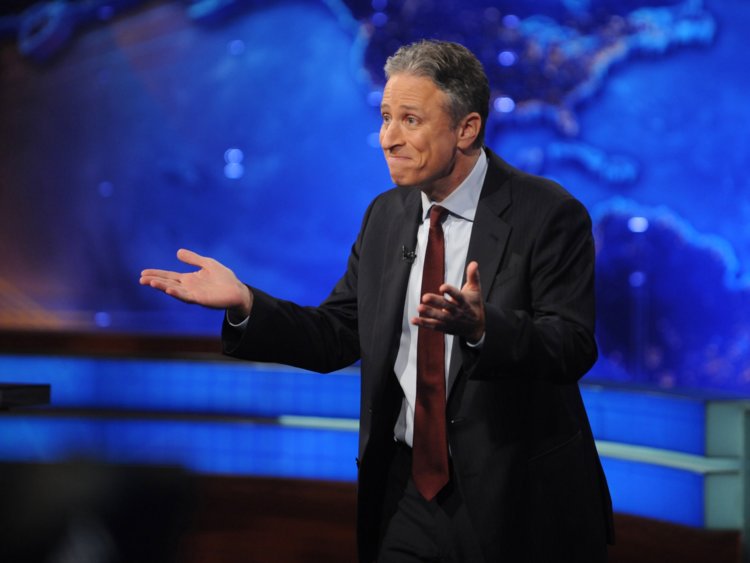 The deal was announced in November 2015, shortly after he left “The Daily Show”. HBO had first-look on any movie or TV projects Stewart was developing, and were planning an animated series, according toVariety.

In thecancellation statement, HBO said the project had “great potential but there were technical issues in terms of production and distribution.”

In November 2016, Stewart was empathetic to Trump’s supporters after the presidential victory. 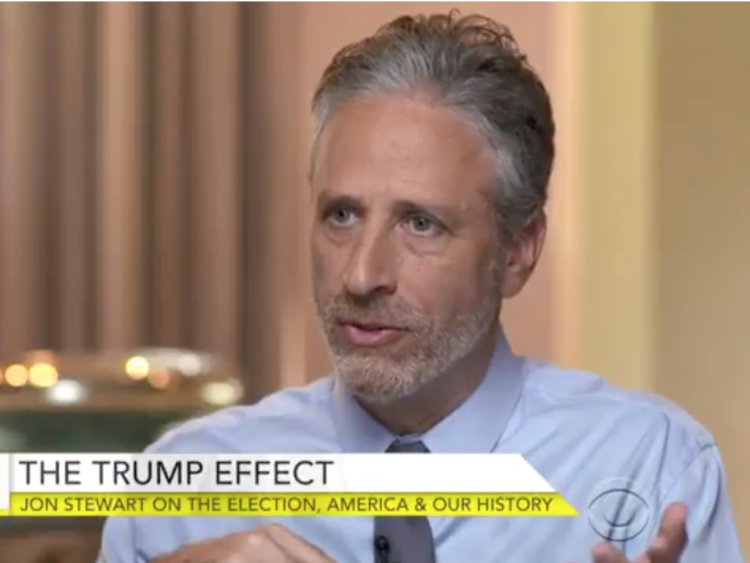 On “CBS This Morning” Stewart said he didn’t think Trump’s electionreflected a changed America, and that congressional Republicans were to blame for causing the gridlock in Washington that propelled him to victory.

“I don’t believe we are a fundamentally different country today than we were two weeks ago,” Stewart said.

“The same country that elected Donald Trump elected Barack Obama,” he said. “I feel badly for the people for whom this election will mean more uncertainty and insecurity. But I also feel like this fight has never been easy.”

On the eve of the 2016 election, Stewart joined Colbert to encourage voters to get out to the polls. 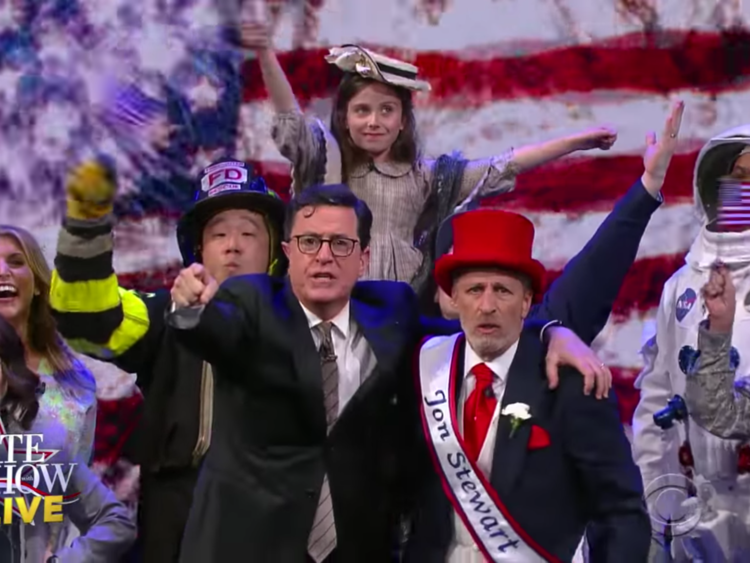 On the show, alongside Colbert, Stewart put on a Southern accent and feigned surprise when he learned Trump was the Republican presidential candidate,Business Insider’s Paul Shrodt reported.

“Are you serious? That angry tax- and draft-dodging little orange groundhog is running for president?” Stewart said.

They also staged a mini-musical featuring a young girl who was apathetic about voting.

In July 2016, Colbert and Stewart reunited again to unleash a “surprise” guest. 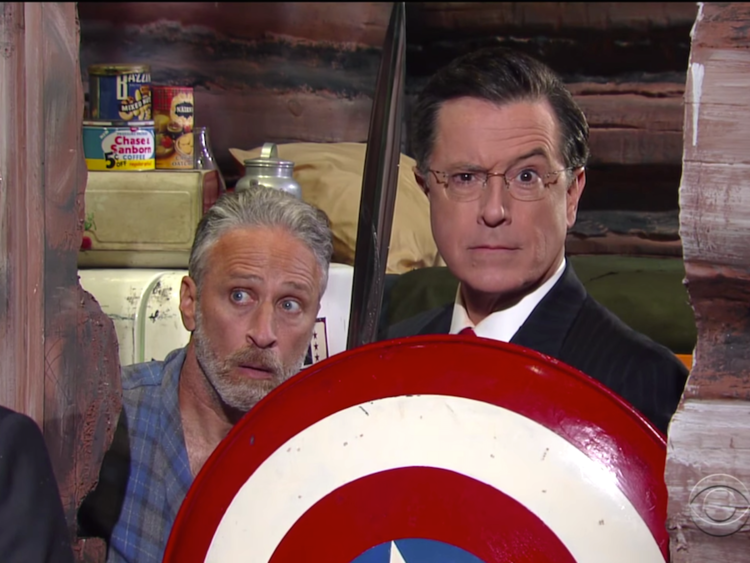 In this appearance, Colbert left the “Late Show” stage to find Stewart out in the forest. He had grown his beard out, begun making jerky, and thought former Florida Gov. Jeb Bush would be the Republican nominee in 2016,Business Insider’s Jethro Nededog reported.

After being told Trump was the candidate and a round of insults, the pair returned to the stage and Colbert’s old “Colbert Report” version of himself appeared.

In June 2016, he popped up on “Full Frontal with Samantha Bee” alongside a pony.

On the show Stewart said to the pony: “You’re white. Are you voting for Trump?”

Outside of politics, he’s a well known animal activist.

In May 2016, Stewart questioned Trump’s presidential eligibility because he was a “man baby”. 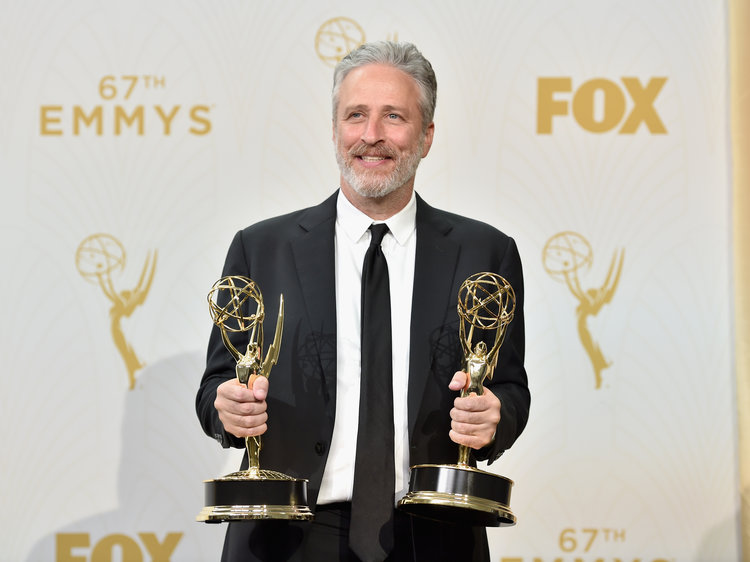 Appearing on an episode of David Axelrod’s ” The Axe Files” podcast,Stewart questioned Trump’s eligibility to be president.

“Look, I’m not a constitutional scholar, so I can’t necessarily say, but are you eligible to run if you are a man-baby or a baby-man?” he said. “I don’t know, and again, I’m not here to be politically incorrect. He is a man-baby. He has the physical countenance of a man and has the temperament and hands of a baby. So to have that together, I mean, for God’s sake.”

In December 2015, he came back to “The Daily Show” to shame Congress. 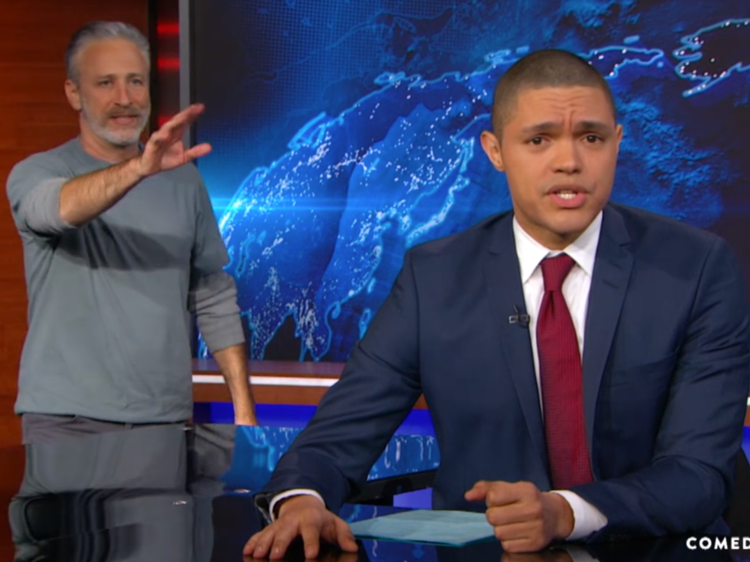 Again advocating for 9/11 first responders, Stewart said to new host Trevor Noah: “I have this issue. I care about it fairly deeply. And I want to get some attention paid to it but I was realizing that I don’t have a show, and no one gives a s— anymore.”

Before that appearance, he had also visited the US Capitol to personally lobby for Congress to reauthorize the James Zadroga 9/11 Health and Compensation Act.

He earned himself an “attitude adjustment” from John Cena in August 2015. 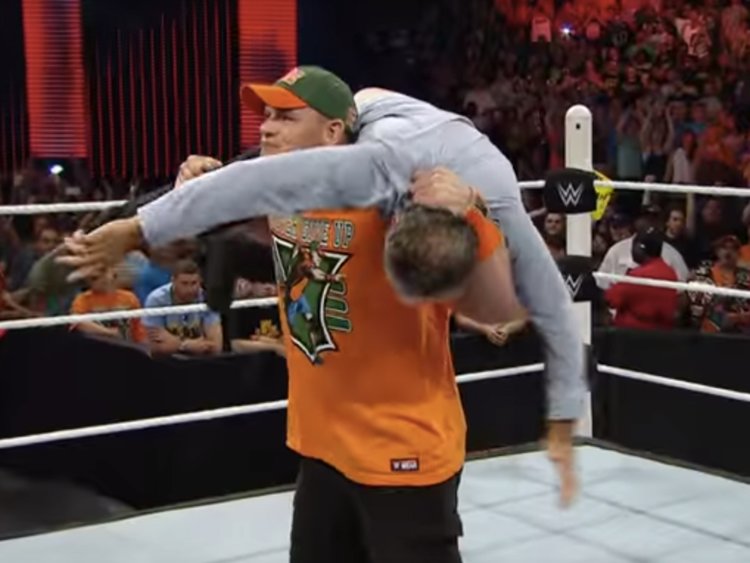 Stewart sent shock waves through the WWE fanbase in 2015 when he betrayed John Cena in a move that cost the wrestler his championship.

Stewart, who hosted the Summerslam pay-per-view event at Barclays Center in Brooklyn that year, interfered during the “Title for Title” match between Cena and defending WWE World Heavyweight Champion Seth Rollins.

Folding chair in hand, Stewart entered the ring and shocked everyone when he attacked Cena with the folding chair, allowing Rollins to get the win.

He returned to the ring later that week and after a tongue lashing, Cena put Stewart across his shoulders and slammed him to the canvas.

After retiring from “The Daily Show,” Stewart announced he would be running an animal sanctuary with his wife in New Jersey. 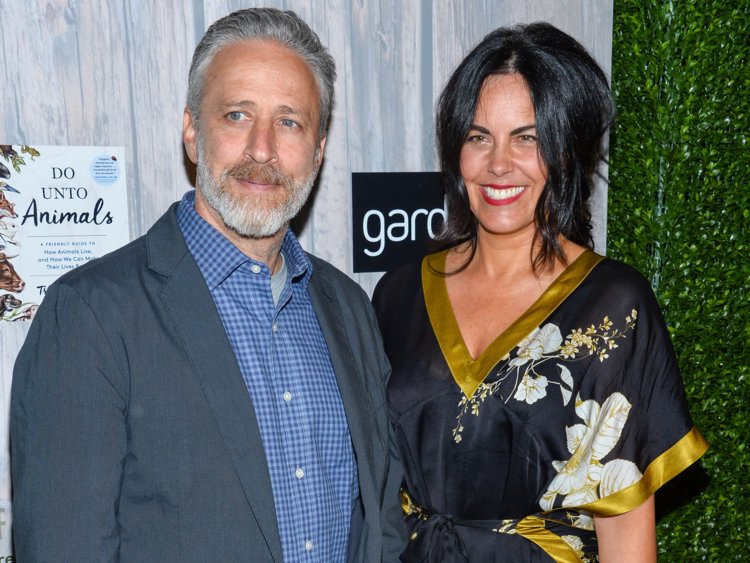 After stepping down from his TV show, Stewart announced at a gala at The Plaza Hotel in New York in 2015 that he and his wife Tracey would be starting an animal sanctuary in New Jersey, according toYahoo News.

He joked that after being immersed in media and politics for 20 years he was a little uncomfortable to be dealing with people who had empathy.

DON'T MISS:Jon Stewart's powerful 9/11 monologue from 2001 is going viral again after he slammed Congress for failing to help first responders

June 19, 2019 Politics Comments Off on 19 times Jon Stewart came out of retirement to stir up controversy, fight for 9/11 first responders, and make us laugh
World News